With a grand heritage of Victorian engineering excellence, the UK leads the world in delivering modern-day megaprojects in a radical new way

Infrastructure is not “the new rock ‘n’ roll”. However, if it were, then with a seminal project management playlist ranging from Heathrow Terminal 5, via the Olympic Park and Crossrail, on perhaps towards Thames Tideway Tunnel and the HS2 high-speed rail link, the best of British is fast becoming a greatest hits for the 21st century.

Recent project history has placed Britain in a unique position of global influence, according to Professor Andrew Davies at University College London’s Bartlett Faculty of the Built Environment. “Over the past decade or so, the UK has transformed the way megaprojects are delivered, moving away from a world of fixed-price contracts, risk transfer, lowest-cost tendering and adversarial relationships,” he says.

For Professor Davies, who specialises in the management of projects, the market has witnessed the emergence of a “flexible megaproject delivery model”, initiated by Heathrow’s T5.

“The UK has created an institutional environment for delivering megaprojects in a radically new way. The United States and many European countries are watching and learning,” he says

Shaun McCarthy, director of Action Sustainability and former chairman of the Commission for a Sustainable London 2012, is not convinced, however, that the benefits of project expertise and experience are being shared successfully.

As well as signature projects bringing world-class individuals and companies to the UK, they also attract investment both inward and into British-lead schemes overseas

Addressing this communication breakdown is one of the motivators behind his leading role in launching the groundbreaking Supply Chain School. “I see very little transfer of knowledge from megaprojects to smaller ones,” he argues, citing the 2012 Learning Legacy, following on from the London Olympics, as an exception to the rule. “We need to do more. Megaprojects have a moral obligation to leave a legacy of knowledge,” says Mr McCarthy.

This responsibility to cascade learning down is echoed by Dr Mike de Silva, US construction corporation Bechtel’s sustainability manager on the Crossrail project. “Large projects such as Crossrail have the scale to influence change and as a public-sector project it is incumbent on us to drive these changes,” he says. “It is important to have good project management processes, and well-trained and experienced project managers. It is also important to create a nurturing culture where the next generation of project managers can gain experience in a supportive environment.”

So can Britain claim the credit for this best practice? Taking Crossrail as an example, the honest answer is both yes and no, explains Mr de Silva. “The majority of our people are UK-based, regardless of the company they work for, so yes, we can say we are the best of British. But we must also recognise that in a global marketplace, we have to utilise the best of the world’s talent to deliver the best outcomes.”

As well as signature projects bringing world-class individuals and companies to the UK, they also attract investment, both inward and into British-lead schemes overseas. Infrastructure is big money and project management prospects are significant.

According to PwC, around $1.5 trillion of the $78-trillion global investment pot for capital projects and infrastructure to 2025 is destined for the UK, with annual spend up 51 per cent. A Blueprint for Britain, the government’s national infrastructure plan, promises a pipeline of public investment worth £100 billion. However, a report by law firm Pinsent Masons and the Centre for Economics and Business Research suggests that figure will be topped by cash-flow forecasts from China alone, totalling a £105-billion Chinese investment in UK infrastructure by 2025.

Moreover, with better understanding of the context in which projects are managed, there exists potential to derisk and grow investment still further.

Just last month, the London-based Ecological Sequestration Trust signed a collaboration agreement to deliver inclusive resilient growth for the people of Mongolia. Moving from big projects to big-picture sustainability, the trust has developed resilience.io, an open-source, cloud-based regional platform, which gathers satellite and Earth observation, open-government and crowd-sourced economic, social and environmental data together in one place, in an understandable visual format.

According to the trust’s founder and chief executive Professor Peter Head, the fact that both the Olympic Park and Crossrail were planned and are being delivered within the context of the London Plan, put in place by the Mayor’s office, is testament to the importance of regional frameworks. “Right now we can build on the success of the likes of the Olympic Park and really scale overseas opportunities using the resilience.io platform roll-out, by supporting demonstration of it with skills honed in the UK,” he says.

“Expertise and tools we will evolve in places such as Mongolia, Africa and China can be applied in the UK to attract more private capital into risk-sensitive infrastructure. However, we must use these tools to design projects within holistic data-driven inclusive, resilient regional plans for them to succeed.”

In Professor Head’s projection, the benefits of such joined-up thinking will be measurable in employment as well as earnings. “As long as we continue to push forward and apply the innovative approach at home and overseas, we can really grow and sell UK expertise globally, and create a lot of project management and other job opportunities,” he says.

Aspirations for turning domestic skills into global exports must, however, be backed consistently by suitably ambitious domestic policy and regulatory frameworks, says John Alker, director of policy and communications at the UK Green Building Council. He says: “In the area of sustainable design and consultancy services, overseas markets, particularly rapidly developing economies, are incredibly important for many British companies.

“The great irony is that there is a danger their expertise is more highly valued abroad than at home, given the collapse of government regulation on zero-carbon buildings – a key driver for much of upskilling and knowledge development.”

The UK has a great deal of talent to offer, but must modernise if it is to compete in a global market where companies from India or China can offer well-educated, highly trained people at a lower price

Not least among new skillsets now augmenting classic project management portfolios is an understanding of applications for digital technology, as smart cities lead at Arup Digital Léan Doody explains: “Every large infrastructure project today will have a substantial amount of embedded technology spend on connectivity, control systems and customer experience. Knowing how to bring together digital and construction project management skills is crucial to avoid cost and time overrun.”

In a world of building information modelling (BIM) and smart cities, the building site is increasingly playing its part in the rise of the data economy. According to Ms Doody, we should look to large projects for their digital legacy as well as asset delivery.

While quick to acknowledge the growing impact of BIM and champion potential in such things as automation and offsite fabrication, Mr McCarthy stresses the need to develop accompanying human resources.

“You still need boots on the ground to deliver a project of any size or shape. The UK has a great deal of talent to offer, but must modernise if it is to compete in a global market where companies from India or China can offer well-educated, highly trained people at a lower price,” he says. “Maybe today they can’t offer the experience, but they will in five to ten years. Our industry must embrace technology and reinvent itself to remain competitive.”

Not unlike a platinum-selling rock band, there is a sense in which project management of British infrastructure finds itself under constant pressure to continue pulling in the crowds and generating revenue for backers. As such, encouraging project managers to think like The Rolling Stones or The Who is not as silly as it sounds. 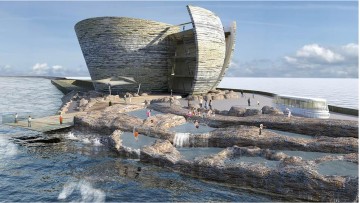 Many major projects claim to be unique. However, consent was awarded last month for an infrastructure development off the coast of Wales set to be the only one of its kind in the world.

The Tidal Lagoon Swansea Bay is a £1-billion project to construct a 9.5km-long U-shaped wall to harness the natural and renewable power of the sea. The twice-daily rhythm of an 8.5-metre tidal range will drive 16 turbines, providing 320 megawatts to power 155,000 homes and save 236,000 tonnes of CO2 a year, for 120 years.

Dubbed “the return of British sea power”, this is an ambitious project, as director of construction and engineering for Tidal Lagoon Power Andrew McNaughton explains: “Our vision is to build a scalable blueprint for a new form of power asset that will employ British industry to harness a British natural resource and return profits to British institutions.”

The lagoon project draws upon a long tradition, according to managing director of Atkins design and engineering division Mike McNicholas. “British engineering has enriched lives for centuries. Take the iconic landmarks Britain has given the world – the Sydney Harbour Bridge, the Burj Al Arab, the skyline of Hong Kong,” he says. “Tidal Lagoon Swansea Bay allows us to combine this wealth of knowledge with high-quality skills and the type of pioneering spirit we’ve celebrated since the Victorian era.”

Inevitably, many integrated cross-disciplinary influences will shape the final outcome. As such, core reciprocal relationships between design and project management are vital, argues Paul Newman, principal of Juice Architects, responsible for the iconic overlapping-shell design of the offshore Swansea Bay visitor centre. “The project is a game-changer. There is not a single solution, with its rapid evolution. The design needs to adapt to multiple pressures, while the team need to understand we have to maintain the spirit of what makes it special,” he says.

The project involves a whole host of stakeholders, from investment and technology, to political and community, with benefits ranging from job creation, sports and tourism, to a Welsh dragon art installation emerging at low tide.

There are further permissions to secure and contract for difference negotiations to conclude, but with consent won, expectations are high, says Mr McNaughton. “As a nation, we lead the world in infrastructure development, but the UK rarely witnesses a major project with the ability to redefine the sector worldwide,” he says. “The Tidal Lagoon Swansea Bay is one such project.”