The obvious way to cash in on Harry Potter would be open a theme park with big-dippers and simulators. That’s what you get at the Wizarding World of Harry Potter in Orlando. Yet when the eighth Harry Potter film finished shooting at Leavesden Aerodrome in 2010, Warner Bros. took a rather different view. The moviemakers took the decision to preserve the sets and open a studio tour. Green screens and animatronics are the main events. It was a big call. Would kids really want to see this stuff?

Warner Bros. Studio Tour: The Making of Harry Potter opened in 2012 and this year welcomed its five-millionth visitor. Popular? The place is a sensation. But why is it such a hit? And how does Warner Bros. keep the punters rolling up?

In essence the tour is a behind-the-scenes look at the sets. And boy, what sets. You can walk through Great Hall where Dumbledore addressed the young wizards. It’s just like stepping into the movie – the only things missing are the floating candles. There’s Hagrid’s hut, Diagon Alley, the Weasley Kitchen, the Ministry of Magic and umpteen other locations to explore. 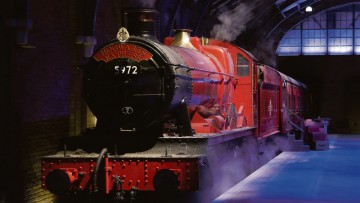 During the tour there’s an opportunity to learn about the film techniques. The props are explained. Cinematographic techniques are demonstrated. It’s a vast and pleasingly highbrow enterprise. An adult with zero interest in the franchise can enjoy it as much as a ten-year-old Potterhead.

The key, Ms Roots says, is the detail. “For instance, there were 1,000 jars created for the Potions Classroom and each one has a handwritten label. The portraits in Dumbledore’s office were all commissioned specifically for the films and feature members of the production crew. And hundreds of wands were individually handmade by the prop makers,” she says.

When the ancient Greeks built the Parthenon they carved marble on the roof only the gods could see. The same ethos is here. Ollivander’s Wand Shop is more than a shooting location for the cameras – it really is a wand shop.

Erudition and entertainment sit side by side. The green screen used for filming Quidditch teaches visitors about filming techniques. It is also possible to leap on a broom and ride it.

The tour keeps expanding. “Last year we redesigned a section to celebrate the “dark arts” which features the scene from the imposing Malfoy Manor drawing room,” says Ms Roots.  “We also put on special features during the holidays which showcase different elements of ‘behind the scenes’.  These have included Sweets and Treats comparing real and prop food, Wand Week where visitors learnt to duel with Death Eaters and Hogwarts in the Snow where elements of the attraction are dressed for Christmas as they were in the films.”

The Hogwarts Express train is a recent addition. The carriage is open for visitors to walk down and see the compartments filled with props. It is telling that construction was managed by Paul Hayes and the special effects by John Richardson, who were the experts on the films. Warner Bros. want to stay true to the films.

Marketing a tour like this isn’t easy. The customer base is huge and global. “Internationally we work with PR agencies in France and Germany to raise awareness,” says Ms Roots. “And we have a dedicated travel trade team who work with markets around the world attending sales missions and trade shows.”

Trade partners bring international visitors throughout the year. The key markets are France, Germany, Australia and the United States.

Piggy-backing on Harry Potter broadcasts and news items works well. Ms Roots says: “We are always looking at ways to engage with our audience through opportunities to showcase the studio tour, including PR around our special features and the behind-the-scenes talent we’re lucky enough to work with, social media linking with topical hooks, and TV advertising, which we ran for the first time last year. The results are evident with significant peaks in website usage and ticket sales.”

Seasonality is low. “Most of our off-peak business comes from schools and groups,” says Ms Roots. “We have an incredible education programme developed by an award-winning teacher, and offer free lessons based on film-making that are linked to the national curriculum and exam board specifications. The lessons are booked months in advance and we have lots of repeat visits.”

Feedback shapes the tour. Ms Roots uses post-visit surveys, both online and at the studio. “Probably one of the most useful channels is TripAdvisor as visitors give unprompted feedback,” she says. The Hogwarts Express was introduced after numerous customer requests. 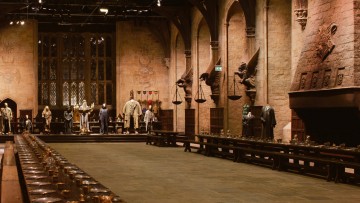 The Great Hall at Hogwarts

A big discovery is that visitors really love interacting with staff. Ms Roots says: “We invest heavily in staff training and find that visitor enjoyment scores have a direct positive impact the more visitors interact with our staff.”

The studio tour is a unique proposition in the industry. So much so, there is no connection with Wizarding World of Harry Potter in Orlando. “We work independently and offer two very different experiences,” she says.

The tour looks like it can run and run. Theme parks worry about virtual reality headsets and video games trumping what they can offer. But the studio tour has no obvious rival.

“It’s still a pleasure to walk through the tour and see the reaction of visitors when the doors to the Great Hall open and they step on to the set,” says Ms Roots. “You really do hear gasps of wonder.”