The rapid advance of technology has transformed the role of the chief information officer, propelling the CIO to the heart of the boardroom.

It has also expanded the task of the CIO from being a passive guardian of an organisation’s infrastructure to an executive who is often leading change and creating new business opportunities in their own right.

Digital tech changing the role of the CIO

For Richard Cross, who is both CIO and chief digital officer of the construction and engineering group WS Atkins, technology has enabled moving systems into the cloud, using social media internally to encourage a sense of community and sharing, and getting more and more data on to hand-held devices.

“We are using a whole bunch of techniques and ways of working that have come out of internet startups that enable an organisation to be agile and adaptive, and it’s a case of digital by default in everything we do within the department, but also across the organisation,” he says.

Now instead of asking surveyors to map a site by hand and eye on the ground, WS Atkins sends out drones, which can provide a detailed 3D laser scan of a site in half an hour, and then check progress every day. 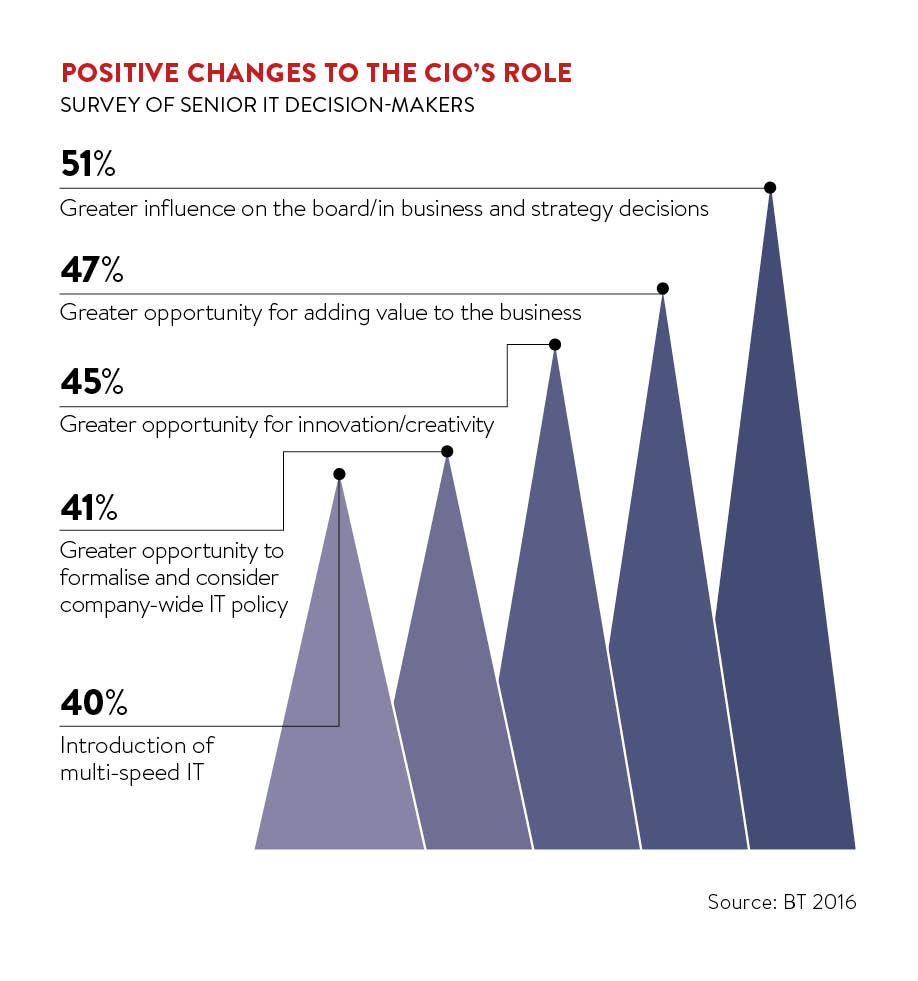 “We have iPads with augmented reality and you point at what is just a piece of land and superimpose what the buildings will look like,” says Mr Cross.

For Andy Williams, CIO of Save the Children International, digital technology is not just changing the CIO role, but the charity’s overall strategy and its ability to help marginalised children in 120 countries.

Over the past three years, Save the Children has been able to make a good start on connecting its frontline humanitarian workers in the field using a wide range of network communications, from basic satellite telecoms to modern mobile technology using fibre.

Mr Williams is also working on automating the key processes in his vital supply chain to make sure “we have transferred the right resources to the right people at the right time and place, and to give our auditors and regulators both confidence and transparency”.

Save the Children, which sees itself as an advocate for children’s rights as well as a provider of humanitarian aid, wants to go one step further.

“It’s early days, but we are thinking about how to create a digital advocacy and campaigning platform for children to be their own advocates. There is nothing more powerful in terms of children’s rights than the voice of the child – being able to deliver their own messages to the policymakers of the world,” says Mr Williams.

Transformation across the board

The very different, and until recently, traditional world of national newspapers is being transformed by digital technology.

Christina Scott, chief technology officer of News UK, publisher of The Times and the Sun, who spent the past three years in a similar role at the Financial Times, has seen the change from sending out printed news to readers, where you get a few letters back, to a digital world of instant feedback.

Mobile and the cloud are important, but to Ms Scott the key thing is data, though not big data in the conventional sense.

“I am saying data in terms of sensibly integrating data into every part of decision-making in the company, looking at marketing, advertising and product development, but also using data to drive operational efficiencies,” explains Ms Scott. Data can also help with journalistic workflows “getting the story out faster in the best possible way”, she adds.

Bill Wilkins, COI and chief technology officer of First Utility, an independent energy provider to one million homes, has been at the company almost from its launch eight years ago.

Without having to worry about legacy systems, Mr Wilkins, who is in charge of digital strategy, has been able to build a digital platform for interacting with consumers, giving them detailed information on how they use energy and how charges are calculated.

“Consumers who use our digital platform and interact with us are less likely to leave us and are therefore more profitable customers,” he says.

All four executives believe they have moved from a passive position – a cost centre often reporting through the chief financial officer (CFO) – to a broader, more creative role engaging with the chief executive.

Ms Scott says she wouldn’t work for a company where the technology role doesn’t report to the chief executive.

“There are still a lot of companies where the COI reports to the CFO and then the chief operating officer. They are the companies that haven’t got it yet. It’s a symptom of how technology is viewed where it’s seen only as a cost as opposed to an opportunity,” adds the News UK executive.

Mr Williams at Save the Children believes the CIO role is “starting to be one of the key change enablers in the executive team” where a collaborative leadership style is more important than reporting lines.

As for the future, Mr Cross of WS Atkins believes the role will expand to include the way the whole organisation looks at and uses technology.

“It will become more and more central and important to organisations. It will still get the basics right on infrastructure, that’s important and essential, but it will also use technology to differentiate and create revenue and value,” he predicts.

For Mr Wilkins of First Utility there will be a further blurring of all the roles in the executive corridor driven by important underlying dynamics.

The lead technical person in an organisation will also spend less time “turning and operating the crank” and more time trying to predict the impact of changing technologies. And that role could produce the greatest value for the organisation.

Mr Williams is also looking over the next decade to technology beyond mobile and social media to transform what his charity can achieve, including the internet of things and 3D printing.

People are going to be able to print prosthetic limbs, he believes, and stories are starting to emerge about the possibility of printing clothing, shelter and even food.
“In my lifetime I think that will be possible – I am an optimist although now we are concentrating on mobile, social media and the cloud,” he says.

In this time frame, top quality CIOs will emerge increasingly from Asia and Africa, concludes Mr Williams, who is perfectly happy with the title of chief information officer.