“Improved customer experience” is the benefit that organisations most frequently gain as a result of adopting digital technologies; 40 per cent named it among the three most significant gains (below). This statistic is consistent with an idea that has gained currency in recent times, that “data is the new oil”. In the past, companies might have relied on hunches and small, not necessarily representative, focus groups to shape their products and services.

But now, businesses are reaping rewards from digital technology that enables them to capture data, process it, run complex, in-depth models and harness the information to improve and tailor customer experiences. Of course, this presents new challenges in itself, and being sensitive and intelligent about the way in which data is captured and used is of paramount importance. But the potential of some of these technologies and techniques is huge. 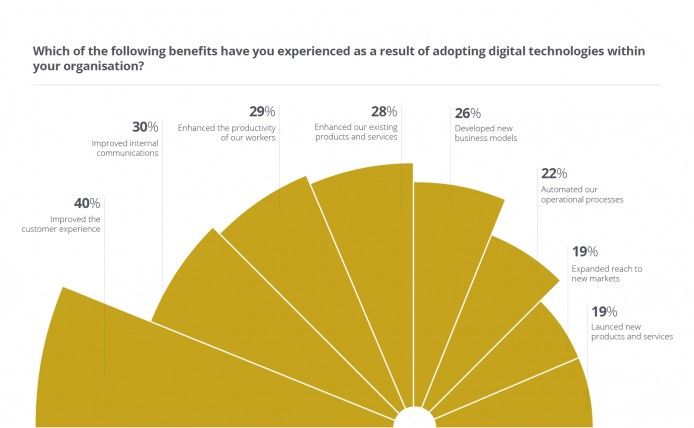 The adoption of new digital technologies is also crucial for businesses that want to meet modern customers’ expectations. As individual consumers, people use slick hardware, fast, functional apps and they demand the same level of sophistication from anyone that they do business with. Rather than worry about bells and whistles, the most effective businesses are looking at how they can give their customers what they want while asking them to make as little effort as possible to receive it.

Among “Traditionalists”, improved internal communications is the benefit most often derived from adopting new technologies (39 per cent), but this is a benefit that can be enjoyed by any type of company. Take the fashion retailer AllSaints, for example. Under the guidance of CEO William Kim, who used to run the digital arm of Burberry, AllSaints has teamed up with Google to introduce Google Apps and Nexus tablets to its operation. One of the major benefits is that store managers across the brand’s 100 shops and concessions are able to communicate instantly and in real time with one another – or to other employees all the way up to the CEO – using Google Hangouts.

As Jen Rubio, AllSaints’ Global Head of Innovation says, “The greatest innovations are often the quiet ones, the ones that change the way we communicate and bring us together.” It’s yet another example of the positive consequences that come from encouraging and allowing people to work how they live.

Looking to the future, however, people seem to be more open-minded (below right). A question prompting respondents to predict the technologies that would have the greatest impact on the way we work over the next five years gave a fairly even spread of results. Cloud computing (40 per cent), tablets (39 per cent), smartphones (31 per cent), social media (25 per cent), mobile apps (25 per cent) and web collaboration tools (23 per cent) were the most popular, but the less popular choices on the list, such as wearables (17 per cent), weren’t too far behind. 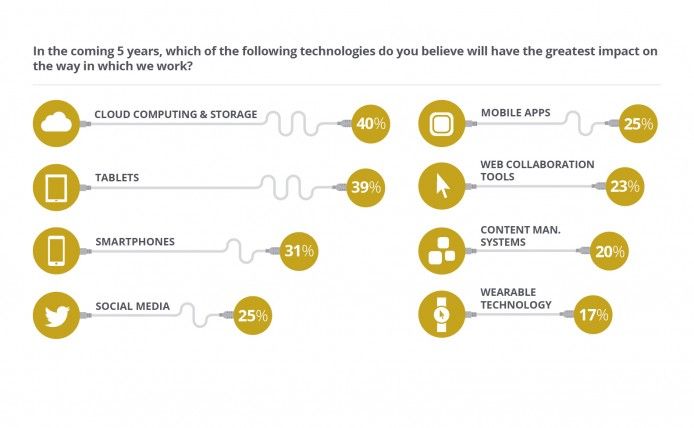 Over the last few years BYOD has become increasingly prevalent, especially among young employees who use high-end consumer technology away from work. When it comes to their professional lives they see the benefits of using the best equipment to perform the task at hand and don’t as readily make a distinction between behaviours, techniques and activities that are ‘work’ and those that aren’t.

Changing attitudes also mean that more and more people accept the idea that it makes sense to operate as nodes in a collaborative network that works in real time. Just compare the success of the open, collaborative Wikipedia with the failure of Nupedia – a closed, hierarchical precursor which was founded by the same person, Jimmy Wales. Wikipedia published 18,000 articles in its first year and is the resource that we all use today; Nupedia, with its well-intentioned but drawn-out sign-off process, published 21 articles in its first year and closed down in 2003, two years after it was launched.

Indeed, the freedom to experiment and iterate with technology and culture can be extremely powerful, according to Nick Hussey, CEO of SayOne Media. “The vast majority of people will have amazing ideas, fantastic energy and they can do so much more when given the freedom to do so than in a structured environment where it’s much more autocratic,” says Nick. “So we try very hard to make sure that we allow our people to be as innovative as they can, to work as flexibly as is possible and to really just allow them to get out there, talk to people and try things. And if things don’t work then, hey ho, we’ll have another go later on. That’s our ethos, and it’s worked really, really well.” 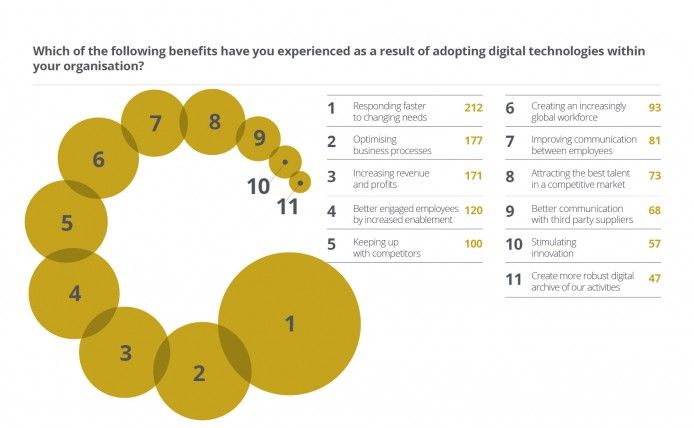