According to Accenture’s Future of Fintech and Banking report, global investment in financial technology or fintech ventures tripled to $12.21 billion in 2014.

The study found that 72 per cent of people think their banks have a fragmented or opportunistic approach to dealing with digital innovation. Worryingly, 40 per cent believe the time it takes their organisation to incorporate new technology is too slow, providing no benefit or, worse, negatively impacting their ability to realise value.

Established financial services players are simply not doing enough to keep up to speed with the surge in innovation investment. If these traditional firms are to stay competitive, greater emphasis on a culture of innovation is necessary.

James Buchanan, strategy director at Razorfish UK, which advises on financial services digital strategy, says: “The biggest thing large financial businesses have learnt from startups is that their business models are under threat. Some have concluded they need to behave like startups – solve small distinct problems, release new products quickly and leave old systems behind.

“However, this gives away their advantages and levels the playing field. It’s like Goliath reducing himself to David. It’s a terrible strategy. 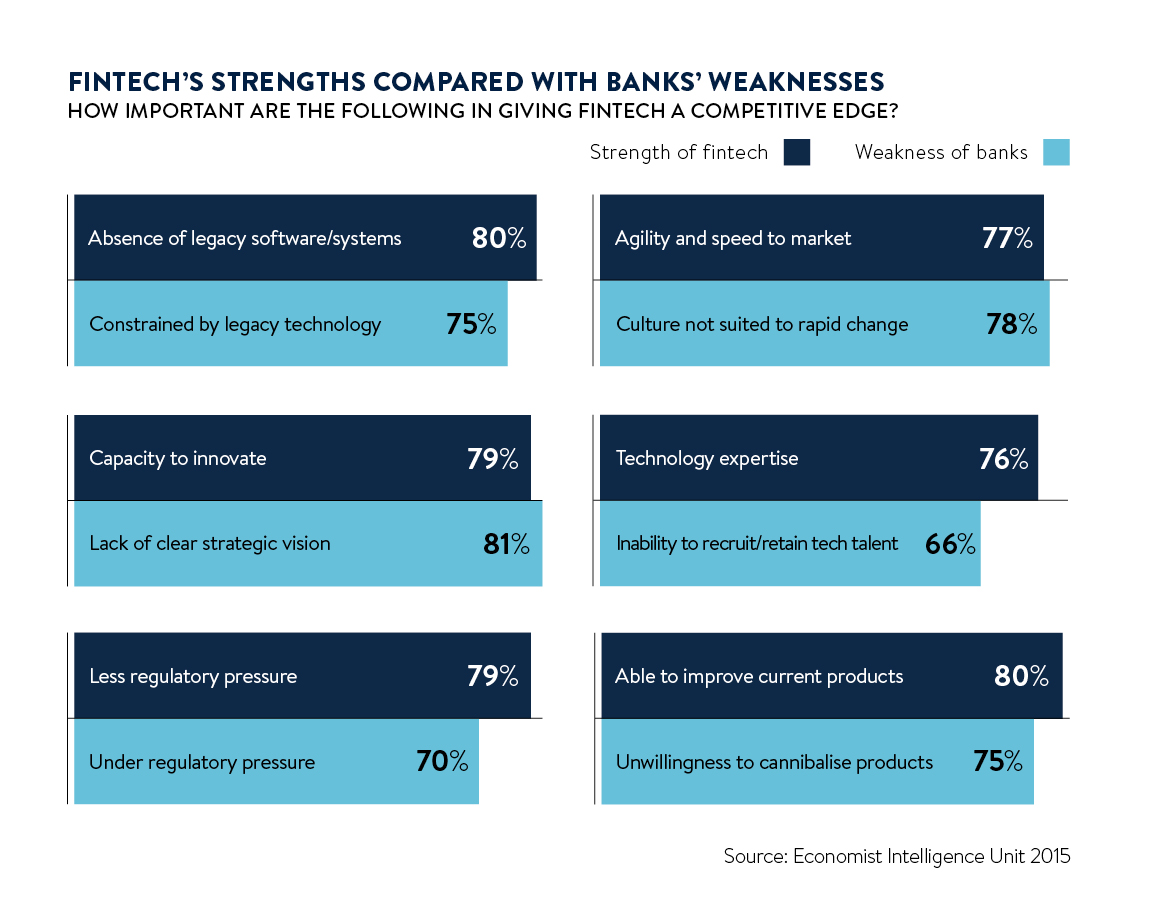 “Banks need to learn from established digital giants, such as Google, Facebook, Amazon and Netflix, which use scale as a source of massive advantage. They have found ways to use customer data to ‘unlock’ industries and create completely new revenue streams.”

Felicia Rosenzweig, partner at brand strategy organisation Prophet, says most fintech companies do a few things exceptionally well from an innovation perspective. “They’re focused. They hone in on genuinely solving one customer pain-point and direct all of their energy and resources accordingly. They’re agile. They empower their employees, get to working prototypes quickly, collaborate closely with users and meticulously gather feedback, and continuously refine the product before, and especially after, it goes to market,” she says.

“They create an appealing and engaging experience that enables customers to rapidly understand what the product is, how to use it and why to use it. They’re accessible, using language, imagery, interactive graphics, videos and other tools to close the gap between the product and the user. They speak to customers in relatable ways and there is minimal visible fine print to intimidate or confuse.”

One big problem, says Auka founder and chief executive Daniel Döderlein, is “banks and large financial institutions are bound by the kinds of red tape and bureaucracy that fintech startups simply don’t have to worry about”. He says: “It’s far easier to innovate when you are able to be agile and responsive.”

Auka is a pioneer in the mobile payments space. In its native Norway, the company had several unsuccessful conversations with various banks about their mobile payments solutions. So in 2014, Auka successfully took its solution directly to consumers and retailers.

But it was only when the country’s largest bank DNB launched its own mobile payments platform that SpareBank 1, Norway’s second-largest bank, approached Auka to talk about partnership.

Last year, SpareBank 1 entered into an agreement with Auka for the exclusive use of mCASH in Norway and in April Auka launched elsewhere in Europe to offer banks a fully cloud-based and PSD2-ready mobile payments solution, conforming to the European Commission’s new payment services directive.

It took almost ten years for Mr Döderlein’s solution to come to fruition. But he says: “If you have a restless attitude, continuously push your boundaries to innovate and always seek input from others more experienced, the ideas, leads and successes will invariably follow – even if sometimes the time it’s taking makes that seem impossible.”

Mr Döderlein believes that banks are actually starting to do more than is reported. “There’s always been a focus on banks who are slow to innovate and lose out to fintech challenger banks, but in reality we’re seeing an increase in traditional banks stepping up in this space, hiring whole teams whose job it is to innovate, for instance,” he says.

“We’re starting to see more and more of an attitude shift across many large companies. They’re seeking to make inroads in replicating the pace and agility of a startup.”

One advantage that banks have over startups is not just financial, it’s experience. “They will apply their years of customer behaviour observation and industry knowledge when developing or implementing new solutions, at the same time pushing their teams to act like entrepreneurs and take those leaps of faith needed to successfully usher in a new era of banking,” says Mr Döderlein.

Shaking off complacency and recognising the potential for digital disruption should be high on banks’ agendas, says Richard Lumb, group chief executive of Accenture’s Financial Services Group. “There is a real risk of customer disintermediation. It’s not just one challenger that’s eating at banks’ customer base, it’s like a shoal of piranhas following them. Startups have the potential to shrink banks’ role and relevance, but they can also help create services that make them more essential to their customers’ everyday lives,” he says. 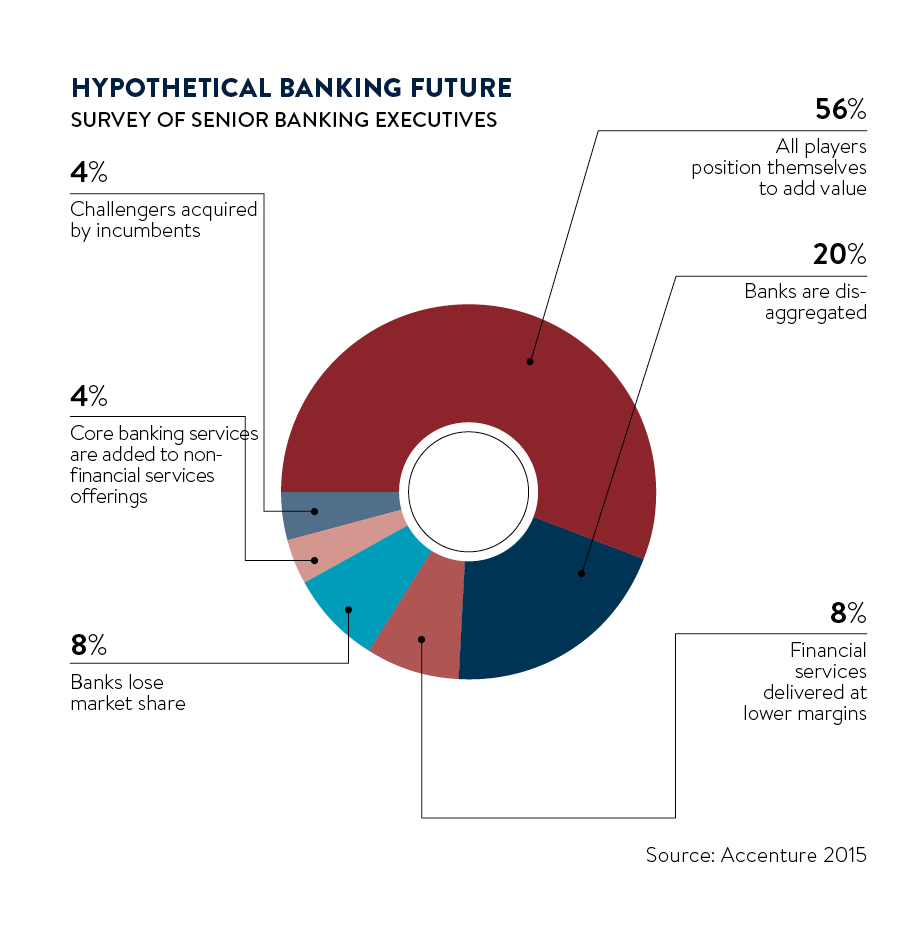 In Accenture’s Fintech Innovation Lab, banks work with entrepreneurs whose innovations help them make banking better, cheaper and faster. From blockchain to artificial intelligence, these innovations are encouraging banks to move their boundaries. But Mr Lumb says: “How effectively banks partner and learn from fintech entrepreneurs over the next two decades could be pivotal to their success or failure.”

Updating legacy technology will also be crucial. He says: “Startups have been able to build technology from the ground up; banks need to think carefully about how to respond. Taking months to migrate customers on to new software or leaving cracks and gaps in systems exposed to cyber attacks, despite trying everything to protect them, is no longer acceptable to consumers.”

It’s true that banks will always have challenges because they carry some unfortunate baggage. Their reputation, shareholders and sheer size puts them at an automatic disadvantage. But, as Dr Theo concludes: “They can certainly fight a lot harder than they currently are. Embrace innovation, empower your people and keep it simple.”