Attracting and retaining talent are ranked as the two main threats to UK businesses in terms of people management, with a disengaged workforce being cited as the third biggest issue (below).

Research carried out by the government taskforce Engage4Success and the University of Bath found that each year, £26 billion is lost to the UK economy as a result of a lack of engagement among employees. On top of that, the UK lags behind many other global economies when judged by this criterion, so it makes sense that “not attracting enough talent in a competitive market” and “inability to retain the best talent in a competitive market” were the highest ranked concerns related to people management. “A dated management structure and behaviour” scored almost as highly and was considered the fourth most serious threat.

It’s possible that, to an extent, concerns about a disengaged workforce (and, by extension, some of the resulting consequences) stem from the prevalence of transformative digital technology. The rise of the ‘always on’ culture has been well documented as phones flashing with emails and messages rarely seem to be far from our side.

Looking to the future, there is scope to use some of the same technology to redress the balance, and foster a way of doing things that solves such problems, rather than exacerbating them. It’s not unusual to wake up and get on a hangout or video call with an office in Asia before breakfast, reply to emails on the way into work and, before the day is over, check in with an office in the States.

But the fact that work can encroach on areas of our lives that it didn’t previously shouldn’t be viewed as a curse. It can even promote freedom and, if anything, means that we should have more time away from the office and the ability to pop out in the afternoon to see our children in their school play, look round a new flat, or whatever might need to be done that day. That sort of work culture must be more likely to result in happier, more productive employees. So, everyone stands to benefit – but only if we strike the right balance.

A clear majority – some 62 per cent of respondents – agree that “work is shifting more and more towards an experience rather than a place (below left).” Only 12 per cent disagreed with that statement. The responses to this question are consistent with the view that digital technology has reduced the emphasis on employees all working in an office in the same place at the same time.

For some businesses, particularly small startups, the main motivation is likely to be cost. The appeal of saving money on rent, administration and fit-outs is obvious. But being able to communicate and collaborate with colleagues and counterparts from anywhere has never been easier.

In some professions, and for some jobs, this is more difficult. But for developers, creatives and people who do a good chunk of their work just by using a device connected to the internet, it can make perfect sense to ‘consciously de-couple’ from the office.

It can also boost productivity. As Chris Ward writes in his bestselling book, Out of Office, President Obama’s first inauguration speech, the board game Cranium, children’s entertainment phenomenon Moshi Monsters and the Harry Potter novels were all conceived in coffee shops. “You can work anywhere,” says Chris. “Most people who work out of the office work in a coffee shop for some of that time – whether it’s a couple of hours or their whole working week.

And most people are involved with selling something somewhere along the line. Sitting in the same room as a lot of people trying to achieve the same goal isn’t necessarily inspiring, but in a coffee shop, you’re surrounded by your customers. If you’re surrounded by the people who you want to communicate with or who you think might buy what you’re creating, that can help you arrive at the right answer much faster.”

The truth behind these observations might well have something to do with “use of technology” and “flexible working”, both being ranked as two of the top four keys to increasing the productivity of staff in the 21st Century organisation (below).

Interestingly, “Improved leadership” was ranked as the most important factor in increasing productivity. Again, this is something that chimes with Chris Ward’s view of changing work culture.

“Managers are having to learn a new way of management which is about the productivity of the individual rather than the presence of the individual in the office,” says Chris. “Monitoring the presence of the individual has always been a bad way of managing people because you see the staff who arrive late or leave early, but you’ve got no idea what they’ve done during the day. So it involves a bit more input from the manager to plan with the employee or team member what they need to achieve, how and in what timeframe. That can be done anywhere and it’s a much more productive way for employees and managers to work. It’s just different to what we’ve grown up with.”

Overall, respondents voted “difficulty of changing working styles/habits over time” and a lack of incentives for employees as the biggest obstacles to preventing a more collaborative work culture (below). But dive into the data more deeply, and some interesting trends begin to emerge. Among Traditionalists, a lack of leadership was by far the most commonly mentioned difficulty, with 82 per cent ranking it first. This compares with a score of just 18 per cent among Pioneers.

Pioneers are much more likely to identify “geographical separation between teams and individuals” (24 per cent), “lack of knowledge of how to collaborate better” (32 per cent) and “software and tools not currently used to their full extent” (38 per cent). Respectively, these were ranked as one of the top two obstacles by only 6 per cent, 12 per cent and 0 per cent of Traditionalists. This suggests that while Pioneer companies are much more likely to have made a commitment to working collaboratively, they are yet to find the perfect way to do it. Altering and honing their processes and practices is still very much a work in progress. 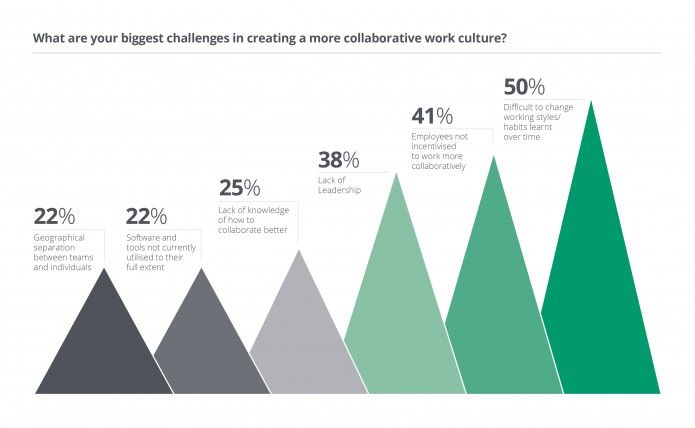 But the good news is that whatever difficulties a business faces in this respect, there is reason to believe that they are surmountable; according to author and technology theorist Tom Chatfield, it may just require a bit of inspiration from the success of the gaming industry.

“If we observe how [computer games] work and why people love them so much, we can learn some very powerful things about learning and transformation,” says Tom. “One thing games do incredibly well is they reward effort rather than punishing failure, and there is this idea that someone should be progressing at their own rate. If we can change the sensation of ‘failed’ into ‘haven’t yet succeeded’ and if we can encourage iteration and repeated effort, we can change the way people approach learning and progress.”

At its heart, the basic concept is simply trial and error, but framing it in a context that makes the ‘trial’ part fun and removes much of the negative elements of ‘error’, must sound like an appealing, effective way of transforming work culture. Again, it’s another example of good, productive things coming from the intersection of changing technology, culture, business and the idea of encouraging people to work how they live.