Despite improvements in survival rates, more needs to be done to save an ageing population from cardiovascular disease

Doing well, but could do better. That’s the report card on cardiovascular care in the UK. It is hard to cavil at data that shows a 36 per cent reduction in deaths from cardiovascular disease between 2001 and 2010 – by any standards that is an impressive result. 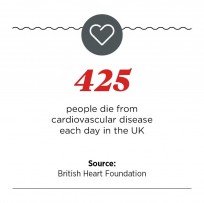 “We have seen a fantastic reduction in cardiovascular mortality,” says Professor Huon Gray, national clinical director for heart disease at NHS England. “But the job’s far from being done.”

Cardiovascular disease still causes almost a third of all deaths and an ageing population multiplies the risks. “By 2022, the 85-plus age group will have increased by 44 per cent and we’ll have nearly a million people living with heart failure,” says Professor Gray. Rising obesity, if left unchecked, could chip away at the gains that have been made. The UK still lags behind other European countries, and within the UK regional and local inequalities remain stubbornly wide.

Most of the improvements have come from better control of the risks, which remains the focus of the strategy launched in 2013. All cardiovascular diseases have a common origin – atherosclerosis (furring or stiffening of the walls of the arteries) – so they should be seen as a single family of diseases. Many patients with one disease commonly suffer another, but this can be missed or care provided in a disjointed way.

A major worry is whether those at higher risk are being picked up early enough. To improve case finding, the last Labour government introduced NHS Health Check, which was supposed to provide 15 million adults between the ages of 40 and 74 with a cardiovascular examination by their GP. But by 2013 it had reached only a fifth of its target population; less than 5 per cent of patients were identified as high risk and of these only a third were getting the right treatment, according to a study commissioned by the Department of Health.

Public Health England relaunched the programme, ignoring criticisms from the Royal College of General Practitioners, among others, that it lacked evidence of effectiveness. The Department of Health rejected a suggestion from the House of Commons Select Committee on Science and Technology that the National Screening Committee should review the programme.

Dr Matt Kearney, a GP and a national clinical adviser to NHS England, says the programme is “a legitimate, rational response” to the problem. “We don’t have the luxury of waiting for 15 years for randomised controlled trials to tell us this is going to work,” he told a Westminster Forum seminar on cardiovascular services in July.

One GP who’s not at all surprised it hasn’t worked so far is Dr Azhar Farooqi, co-chairman of Leicester City Clinical Commissioning Group (CCG). “Only 8 per cent of practices achieved the numbers they were supposed to and 22 per cent of practices didn’t do any checks at all. In Leicester our performance was really low,” he says. So the CCG redesigned the scheme with templates to ensure GPs did the right checks and acted on them. Instead of inviting people in, GPs did the checks opportunistically when a patient of the right age attended for some other issue. £400,000 a year was provided to run the scheme. 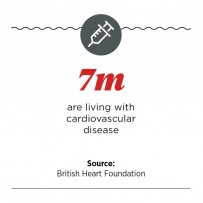 This worked a lot better, he says, with many more patients seen and 13 per cent of them identified as high risk. Overall a third of patients checked had either high blood pressure, diabetes or a high risk of cardiovascular disease requiring action. But the scheme depends on public health funding, which comes from local authorities and is not ring-fenced. At least one county council has already stopped payments to GPs half way through the financial year.

New guidance suggests that anybody with a 10 per cent risk of developing cardiovascular disease within a decade should be given the option of taking statins. But many with a much higher risk as a result of an inherited condition – familial hypercholesterolemia or FH – remain undetected. Of the almost 200,000 estimated cases in England, only 15 per cent have been identified.

Although people dread a heart attack, many don’t realise that the chance of survival is high

This is despite guidelines being in place since 2008 that show how to do it. It is a genetic condition so whenever a case is identified, close relations should have their DNA tested for the gene responsible, in a process called cascade testing. “Here we are in 2015 and it’s not happening,” says Dr Peter Weissberg, medical director of the British Heart Foundation. “It’s frustrating. Specialist commissioners said it wasn’t their job because the condition was too common, while local commissioners said it wasn’t their job either because it was too rare. It fell between two stools.”

Although the foundation’s  job  is supporting research, not filling in the gaps where the NHS has failed, it has made an exception in this case, co-funding a programme in Wales, and in 2014 deciding to pay for specialist FH nurses in 13 sites in England and Scotland. “We’ve identified 215 cases already, although we’ve only just started,” Dr Weissberg says. “We aim to show the testing scheme is cost effective.”

Survival is much higher where more people are trained in cardiopulmonary resuscitation (CPR) and use it promptly. In public places the availability of defibrillators can help, but 80 per cent of cardiac arrests take place at home. Calling 999 quickly and providing CPR is the best a relation or bystander can do, and it might double the survival rate. The British Heart Foundation supplies training DVDs and kits to all secondary schools, and aims to train two million people a year in CPR. That could save 5,000 lives, says Dr Weissberg.

Strategy agreed in 2013 sets out ten key actions to improve cardiovascular health in England. But how likely are they to be achieved?

1. Improve management of cardiovascular disease (CVD) as a family of diseases

This needs new service models crossing primary, acute and community care. NHS Improving Quality was supposed to be managing the process, but it has since been abolished.

Healthier lifestyles would be a major gain, but the strategy relies on persuasion and voluntary change by the food industry. Taxes on unhealthy foods are ruled out. This may not be enough, critics say.

Six years after it began, the Heath Check lacks professional buy-in and evidence of effectiveness. Poor implementation so far and the doubtful commitment of local government make success a long shot.

Software packages can help GPs identify patients at risk, but not all use them. Improvement should be possible.

NHS England will work with the chief coroner to improve processes for identifying inherited conditions. But is the death certification process in England up to it?

There is plenty of scope for recasting incentives for GPs to manage care better. The best already do a good job, so this is more a case of chasing up laggards and narrowing variation.

Training in cardiopulmonary resuscitation or CPR, providing maps showing where defibrillators are and awareness programmes are one leg. The other is providing fast access to the right treatment in hospitals, seven days a week.

8. Improve care of those living with CVD

Rehabilitation after a heart attack is variable and often poor. There is plenty of room for improvement, but not much clarity on who will be responsible for the assessments and care plans promised.

Palliative care has been largely restricted to cancer patients, but others could benefit. Some pioneering regions have already shown it can help.

10. Improve the use of information to drive improvement

Transparency drives improvement, the government believes. If so, plans to make lots more data on quality and outcomes public are a good idea.