Storing energy is transforming the UK power market, changing home and business consumers’ relationship with consumption while offering the potential to slash bills

What do you get the business mogul who has everything? Strangely enough, the answer is somewhat less exotic than you might expect – energy storage.

The new Breakthrough Energy Coalition has declared storage an investment and innovation priority. Spearheaded by Bill Gates, this billionaires’ coalition boasts a stellar roster of backers, including Jeff Bezos of Amazon, Mark Zuckerberg of Facebook plus Sir Richard Branson. Not surprisingly, the market approves.

According to IHS Technology, grid-connected energy storage is set to explode, with annual installations forecast in excess of 6 gigawatts in 2017, then skyrocketing up to more than 40GW by 2022. The final quarter of 2015 alone showed a 45 per cent increase in the global pipeline. Storage is big and hot.

Storage is also diverse. In Northern Ireland, Gaelectric is using €6.5 million of European Union funding to convert excess energy from renewables into compressed air to store in salt caverns, almost a mile underground, along the Antrim coast. Its compressed air energy storage at Larne will provide 330 megawatts of power for up to six hours.

For UK home and business markets, the technology that figures most is battery storage for electric cars and microgeneration

By contrast, a $55-million 50MW facility planned for the Nevada Desert features a train. Advanced rail energy storage moves millions of pounds of mass uphill against gravity on railroad shuttles. This process can store enough energy to power a medium-sized city for hours, when the train comes back down the track.

For UK home and business markets, though, the technology that figures most in the present energy debate is battery storage for electric cars and microgeneration. Entrepreneur Elon Musk even provides a certain celebrity sparkle as his premium electric car brand Tesla pumps the media profile of its home battery product Powerwall. Storage is sexy, almost.

Taking a systemic view of UK capacity, the Investing in UK Electricity Storage report by Eunomia Research & Consulting provides the first dedicated market forecasts. From a relatively low start point of just over 26MW of capacity spread across 24 sites, findings predict exponential year-on-year growth to more than 1.6GW in 2020.

According to principal author Chloe Bines, the real step-change anticipated is when National Grid enhanced frequency response (EFR) contracts come online in 2017. “We expect to see a number of battery projects successfully securing contracts as a result of the EFR tender,” she says. “That’s important because it helps improve investor confidence.”

This will benefit both the industry and its customers, Ms Bines adds. “EFR is a new way that ‘behind the meter’ storage can save businesses money. Not only do they avoid peak electricity costs, but they can also make an income from storage while helping make the grid more resilient,” she says.

If savings are passed on to small businesses and especially homeowners, storage should put money back in consumers’ pockets

Storage can also increase self-consumption of residential solar, and the market is excited about prospects for smart tariffs and meters to help reduce homeowners’ bills. Although Ms Bines tempers this optimism with a note of caution. “If we’re going to see residential energy storage take off, it will depend on time-of-use tariffs becoming available. A differential between peak and off-peak pricing means there’s opportunity to make a saving through storage, but it would need to be significant to become economic at this small scale,” she says.

In an influential deal struck in advance of the EFR, National Grid has signed a four-year contract with Renewable Energy Systems (RES) to provide 20MW of frequency response from battery storage. The project will prove the effectiveness of storage to act to stabilise the grid, ensuring it continues to operate close to 50 hertz (cycles per second).

The battery will respond in less than one second to any deviation and RES group business development director Rob Sauven describes how the system works. “Connected to the transmission system, storage can inject and suck energy in and out of the grid to stabilise it during periods of rapid change of demand or generation. When connected to distribution, it can support a congested part of the grid such as a substation. This removes the need to invest in upgrading,” he explains.

Greater grid efficiency could cut costs all round. If savings are passed on to small businesses and especially homeowners, storage should put money back in consumers’ pockets, argues Joe Warren, managing director of Powervault, the UK’s first fully integrated home energy storage system provider. He says: “Storage is predicted to create billions of pounds of value to the UK energy system – contracts like EFR will realise potential by ensuring the value flows back to those who invest.”

Powervault has just launched its second-generation products and closed its third Crowdcube fundraising, overfunded to more than £1.3 million. For Mr Warren, storage is the missing piece of the puzzle for renewables in a post-subsidy world. “The way forward for the home renewables market is to deliver smart bundles of products which maximise savings and make life easy for consumers. We’ve already bundled our product with solar panels and LED lights to deliver maximum value,” he says. “We believe that energy storage will become as commonplace as a dishwasher in the home.”

While we may not all become billionaires like Bill Gates, storage might still promise to make us at least a little energy richer. 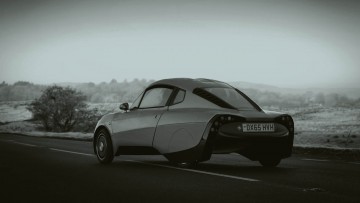 This February, a pioneering Welsh company launched a clean and green road machine with a difference – hydrogen.

Designed from scratch, Riversimple’s two-seater Rasa is billed as the most efficient car in the world for ordinary road-going use. With no tailpipe emissions but water, the hydrogen-powered FCEV (fuel cell electric vehicle) refuels in just three minutes, for 300 miles.

Adding to six-figure EU, Welsh and UK government backing, crowdfunding investors can now take a stake in the project and a technology market is up for grabs, says Riversimple founder Hugo Spowers. “Hydrogen cars and infrastructure are a great opportunity for the UK to re-establish leadership in the car of the future. We have better skills – and more of them.”

Available in 2018 through a unique sale-of-service model – where customers pay a fixed monthly amount to cover all costs, including fuel – the Rasa is revolutionary, concludes Dave Hampton, carbon coach and radio presenter. He says: “Everything must change, starting with how we think. And Riversimple have rethought everything – the entire automotive personal-mobility dream. The Rasa is tomorrow’s disruptive technology on the road today.”