A healthy lifestyle, increased awareness, and more widespread vaccination and screening have great potential to reduce the risk and rate of cancer

Estimates suggest about 80 per cent of cancers are caused by environmental factors, as opposed to endogenous agents, such as genetic mutations, oxidative stress and inflammation. The most common of these factors are smoking, alcohol, obesity, inactivity, ultraviolet radiation, air pollutants, food carcinogens and chemicals, including asbestos and benzene.

Exposure may occur through lifestyle, diet and occupation, and contributes to more than 200 types of malignancies, such as lung, breast, colon and blood cancers. Environmental factors also include infectious agents, such as human papillomavirus and the bacterium helicobacter pylori, which cause cervical and stomach cancer, respectively.

Currently more than 331,000 cancer cases are diagnosed in the UK each year – 50,000 more than a decade ago. And the situation is set to get worse.

Tom Stansfeld, health information officer at Cancer Research UK, explains: “Cancer risk increases with age – and the UK population is ageing. This means that half of Britons will develop cancer in their lifetime. We need to plan ahead to make sure the NHS is fit to cope. With health services already overstretched and people living longer, it’s clear prevention is going to be vital to tackle cancer head on.”

Smoking remains the largest preventable cause of cancer, responsible in the UK for more than one in four cancer deaths and nearly a fifth of all cancer cases

The good news is environmental risks are modifiable. Research in the British Medical Journal shows, for example, that stopping smoking before middle age lowers the risk of lung cancer by about 90 per cent.

“Smoking remains the largest preventable cause of cancer, responsible in the UK for more than one in four cancer deaths and nearly a fifth of all cancer cases,” says Mr Stansfeld. “We’ve seen the number of smokers fall in the past few decades. This has, and will continue to have, an effect on preventing over 14 different cancer types.”

Unfortunately, factors such as obesity and alcohol are driving up the number of other cancer types. Mr Stansfeld adds: “In the UK, two thirds of adults are overweight or obese and the amount of alcohol drunk per person has nearly doubled in the last 50 years. So there is scope for improvement across these areas, while the work on smoking continues. 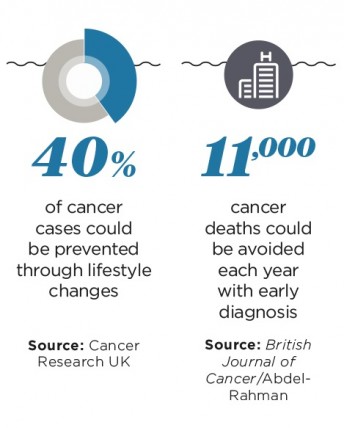 “Evidence shows that more than four in ten cancer cases could be prevented by eating healthily and in moderation, exercising more, avoiding alcohol and enjoying the sun safely. This isn’t a guarantee against cancer, but it can stack the odds in your favour.”

The same is true for vaccination against malignancies caused by infectious agents. Vaccines enable the immune system to recognise and fight these agents, lowering cancer risk.

Farzin Farzaneh, professor of molecular medicine at King’s College London, explains: “Vaccination against hepatitis B and human papillomavirus infections have already led to reductions in liver and cervical cancer, respectively. There have also been major breakthroughs in vaccination against non-infection-related malignancies such as breast, prostate and brain cancer. This is currently used in clinical trials to stop the disease from returning following treatment, but it could eventually help prevent cancer in the first place.”

Aspirin, too, has protective properties against certain cancers, particularly of the colon, Professor Jack Cuzick, head of the Centre for Cancer Prevention at Queen Mary University of London, points out.

In a recent review, he concluded that taking aspirin for ten years, starting between ages 50 and 65, reduces by up to 9 per cent the number of cancer events over a 15-year period. “Aspirin use, together with a healthy diet and exercise, may thus be the most important preventive measure after not smoking,” says Professor Cuzick.

Early diagnosis also plays a pivotal role in cancer prevention, in terms of reducing mortality. Landmark research by the London School of Hygiene & Tropical Medicine, and subsequent analyses, estimates that up to 11,000 UK cancer deaths could be prevented each year, and that these events are largely related to late diagnosis.

Lack of awareness of cancer symptoms is a contributing factor. A 2012 Cancer Research UK and Tesco report found that more than 75 per cent of 2,090 people surveyed did not list pain, cough and bowel problems as potential cancer symptoms.

And that is where screening comes in. Screening is available in the UK for breast, cervical and colorectal cancer. It is not completely accurate and may result in overdiagnosis – the detection and treatment of tumours that would never have caused problems. But the benefits clearly outweigh the harm.

A review, led by Professor Sir Michael Marmot of University College London, concluded that breast cancer screening with X-ray mammography, for instance, saves 1,300 lives annually in the UK and only about one in four women diagnosed with cancer through screening are overdiagnosed.

According to Professor John Field, director of research at the University of Liverpool Cancer Research Centre, a similar programme is needed for lung malignancies, the most common cause of UK cancer mortality. He notes that 75 per cent of lung cancer patients are diagnosed too late, resulting in more than 35,000 deaths annually. US data shows screening smokers with low-dose computed tomography could reduce this toll by 20 per cent. 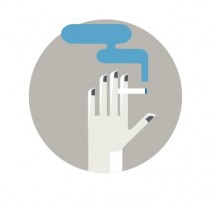 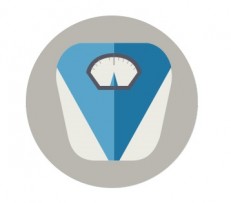 Overweight and obesity cause ten types of cancer, including breast, bowel and pancreatic, which are thought to be responsible for more than 5 per cent of all cancers in the UK. 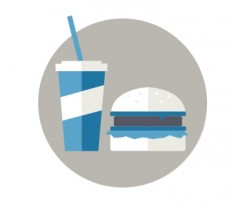 Diets rich in fat and processed meat, and poor in fruit and vegetables, cause nearly 10 per cent of cancer cases; salty diets account for about 25 per cent of stomach cancer cases. 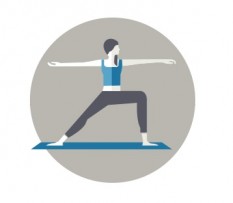 Being physically inactive increases the risk of breast, bowel and womb cancer; some 3,400 cases of cancer are believed to be related to exercising less than 150 minutes a week. 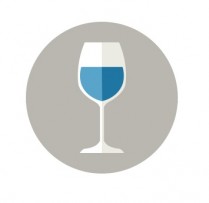 About 12,800 UK cancer cases annually are linked to alcohol, including 3,200 cases of breast cancer, the most common malignancy; overall, alcohol can cause seven types of cancer. 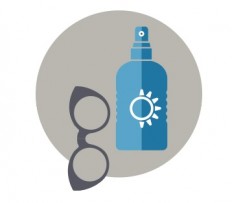 Too much exposure to ultraviolet (UV) radiation from the sun or sunbeds accounts for 86 per cent of skin cancer cases in the UK every year; sunburn triples the risk for this cancer.