Automation is revolutionising how we work

“It was a bright cold day in April, and the clocks were striking thirteen.” The opening line of George Orwell’s great novel 1984 sets up a cautionary tale of how the future could look. In its way, what we’re confronting in 2020 is every bit as chilling, but it is also an exciting time of opportunity.

Yet, just as the clocks “were striking thirteen”, there could be alarming changes at work in the name of progress.

“Within the next five years, 20 per cent of all the jobs that exist today will have been automated away,” claims futurologist Rohit Talwar. “By ten years that could be at least 50 per cent and by 20 years, 80 per cent.”

At the heart of this change are technology and the advance of artificial intelligence, which will eradicate the need for millions of back-office staff and knowledge workers

And it’s not just scary trousers time for the worker bees, either; businesses have got to move fast, too. “If you look at Fortune 500, there’s an awful lot of dead men walking,” cautions Mr Talwar, who has worked with BAE Systems, DHL, PwC, Shell and others.

And the same goes for their chief executives, 70 per cent of whom, he predicts, will not be in post come January 1, 2020. Because either they’ll be gone – or their businesses will.

At the heart of this change are technology and the advance of artificial intelligence (AI), which will eradicate the need for millions of back-office staff and knowledge workers, including even doctors, just as advances in telephony eliminated switchboard operators from Sidney to Seattle over the last 15 years.

The AI doctor might not have the same bedside manner, but it’ll diagnose just as accurately as the human variety – maybe even better – and it’ll work 24 hours a day, seven days a week, without holiday, sick leave or pension. The opportunity for business is massive. 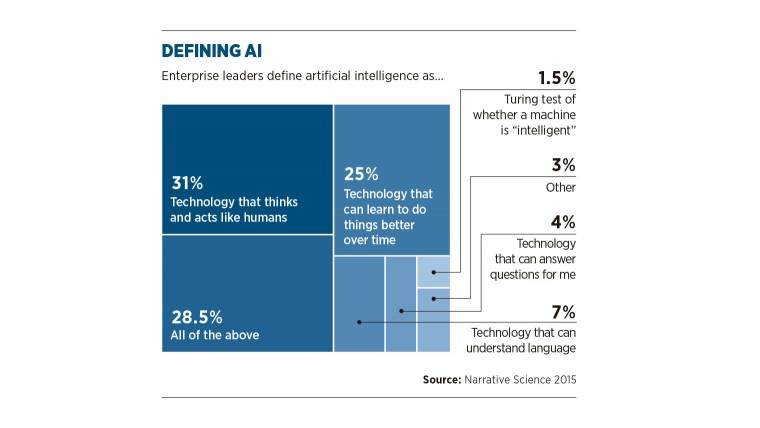 And AI isn’t happening in a vacuum; it’s being accelerated by the sharing potential of the internet and big data.

“New technologies diffuse across the world much, much faster than technologies did in the past,” says Carl Frey from Oxford Martin School at the University of Oxford. “The fact that more things are becoming more digital and can be transmitted at very low costs almost instantaneously anywhere in the world is the main contributor to that change.”

Digitalisation, he adds, “creates powerful data which is the enabler of the expanding scope of automation”.

There’s a generational shift, too. Generation Y, those born from about 1980 to 2000 and also known as millennials, are coming of age. And they see the world differently. Not for them the distant, analogue memories of black-and-white televisions the size of a Mini Metro or rotary dial telephones that could break your arm.

“There’s a new breed coming through,” says Mr Talwar, “people who were born digital and don’t see cars, houses and hospitals – all they see is a universe of data. They believe that every problem can be solved by getting the data, managing it, applying the right algorithms and then underpinning it with the right technology.”

Which is why Google believes it can go from search engines to extending your life expectancy to 500 years – and providing you with a driverless car along the way.

For Dr Frey the pace of change is systemic. “I don’t think that people today are more creative or more innovative than people in the past,” he says. “There’s simply more people and we have better ways of interacting with each other than in the past, and that reaches critical mass.”

And that critical mass is coming, like an express train.

The future of work

But don’t cancel the tennis club membership just yet as most jobs won’t disappear. Many will change. Doctors, for instance, may spend more time on patient care, leaving the robots to the diagnosis, while lawyers may have more time for more clients, allowing clever AI software to do the boring reading for them.

And while the latest technology revolution is creating far fewer direct jobs than those of the 1980s and 1990s, Dr Frey points to evidence that every new tech worker supports some five jobs in services, which offers opportunities too.

One thing is certain, technology will impinge on our working lives in ever greater ways and restructure our work fundamentally. “We’re going to have a more project-based economy in the future than we’ve been used to,” says Dr Frey. “Our parents had careers, we have jobs and our children will have gigs.”

He envisages armies of people working on projects from cafés, their homes and sometimes an office. And many of them are already at a Starbucks near you, nursing a long-cold coffee as they tap at their laptops. “They will need to be much more adaptable to new technologies arriving to remain competitive in the labour market,” adds Dr Frey.

And that’s because companies are leading the headlong march towards automation, because they have to, to survive. Some may even go the whole hog and become entirely automated business units existing only in software.

Rumour has it that some large companies think they can automate themselves to about 20 per cent of their current workforce over the next five years, which means they’ll be leaner than the competition. It’s like the no-frills airline battle of the last 20 years, but on a much larger canvas, and it’s all driven by the digital art of the possible.

And unsurprisingly not everyone will make it.

“A lot of big companies will just disappear without trace,” cautions Mr Talwar. “They will be the Pan Ams and TWAs of the modern era. It’s really hard to hear that you’re basically the band on the Titanic when you’re the CEO or exec team of an organisation.”

So if you don’t want the music to stop on your watch, here’s some advice from the experts: you have about three years to get your act together, to start embracing the new technologies and restructuring your business around them.

Not for nothing did Roy Kurzweil, the inventor and Google engineer, famously forecast back in 2001 that the equivalent of the last 20,000 years of progress would be packed into the next 100 years.

So what are you doing today?