To mark the centenary of the First World War, one innovative exhibition is leveraging augmented reality to create an immersive artistic experience like nothing seen before 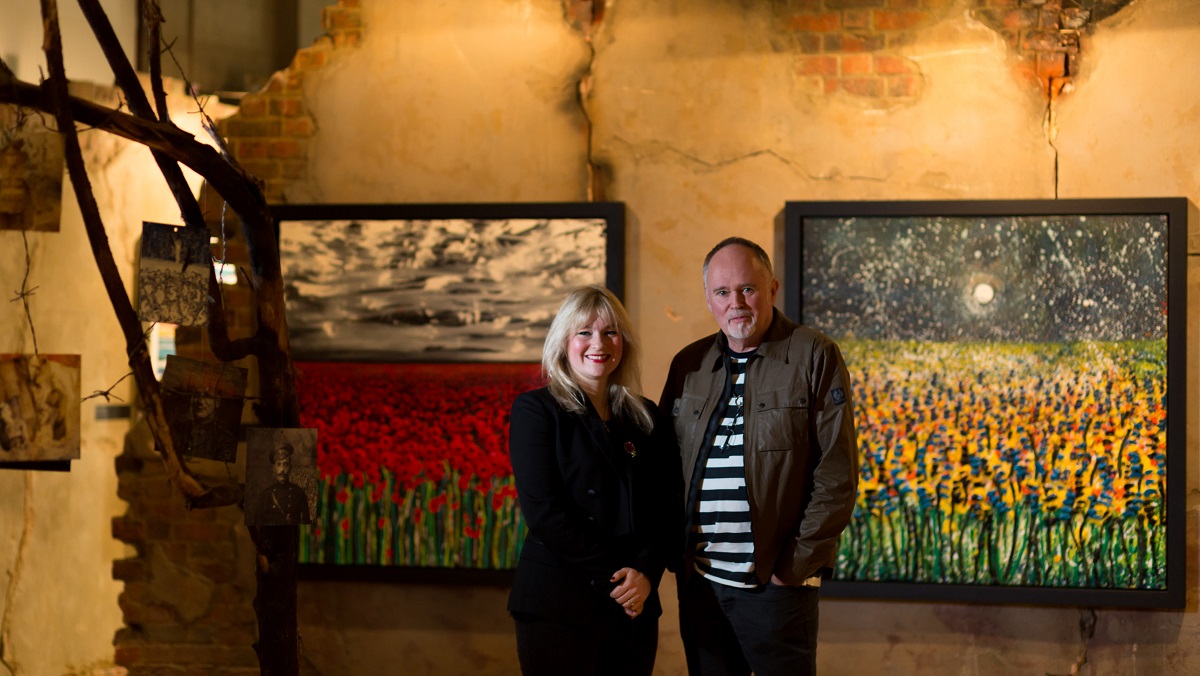 It is almost exactly 100 years since Armistice Day – 11am on the eleventh day of November in 1918 marked the end of the First World War, in which 16 million people died. How fitting that the date falls on a Sunday this year, and Remembrance Day can be suitably honoured.

The National Service of Remembrance, held at The Cenotaph in Whitehall in London, will unite the nation, once again. Her Majesty The Queen, armed with a poppy wreath, will lead the tributes. At 11am there will be a two-minute silence and an opportunity for everyone to pay their respects to those who have suffered or died in wars.

It will be a poignant moment, precisely a century on from the conclusion of the Great War. However, in this digital age, where war is waged via cyber attacks and using artificial intelligence, is it possible to understand truly what the soldiers of World War I experienced and sacrificed for our freedom? Ironically, technology has provided a successful solution to this problem.

The art of Scarlett Raven and Marc Marot embraces augmented reality to bring back to life the memories of soldiers who fought in the First World War. The Danger Tree exhibition combines Raven’s reworked oil canvases, depicting poppy fields – the symbolic red flowering plant was the first thing to grow back on the otherwise barren battlefields of Flanders Fields – and Marot’s multimedia vision and digital wizardry.

Using a choice of two smartphone applications, Blippar or Artivive, viewers of The Danger Tree exhibition can hold up a device to the art to be taken back in time and explore in the next level of art immersion. It’s a multi-sensual, multi-layered assault, and – be warned – very powerful. Raven’s paintings evolve, with every daub of paint recorded and then combined with graphics, photographs, poetry and music utilising stop motion animation.

The art is further elevated by the choice of music by Marot – who has been a leading light in the music industry for decades, having been the managing director of Island Records who signed Pulp, Elbow, and The Cranberries, as well as working with U2 for 18 years. He chooses famous wartime poems and letters which are narrated by famous actors, including Sean Bean, Christopher Eccleston, Gemma Arterton, Charlotte Riley, Sophie Okonedo, and others. Each painting features a bespoke score created by film composer Marc Canham which adds to the atmosphere.

The Danger Tree exhibition, which will be displayed at all 36 Castle Fine Art galleries from 1 to 11 November, takes its name from the only tree left standing on a Somme battlefield at Beaumont Hamel in Northern France.

Ian Weatherby-Blythe, group managing director of Castle Fine Art, was approached by Raven and Marot about The Danger Tree, and it took little time to persuade him to exhibit the unique works of art. “It was the most moving art experience of my life – and I’ve had several art experiences, as you can imagine,” he recalls. “It was just sensational.

“Since July 2016 we have taken The Danger Tree around the country, exhibiting it in museums and locations that you wouldn’t normally take art to, such as the Dr Martin Luther King Jr Building in Liverpool, Titanic Belfast, and Manchester Central Library. In every venue, the reaction from the public has been absolutely incredible.”

Helen Roden, artist brand manager for Castle Fine Art, says: “We believe that Scarlett and Marc are the world’s first ‘augmentists’ using cutting-edge technology in this way. It’s not been just about the paintings, though: the major exhibitions have taken place in what have been made to look like bombed-out venues through the use of a five-ton film set.

“We equip people with iPads, and headsets, so they can immerse themselves in the paintings. It is unbelievable to watch their reactions as they see the real-life, heroic stories behind the paintings.”

Weatherby-Blythe adds: “We believe this augmented style is the next stage in art, the next movement. For the first time an artist is able to explain exactly what their art means to them. Previously you had to rely on the skill and the knowledge of the art dealer and the art consultant to convey that message accurately, whereas with augmented reality art the artist has the opportunity to tell the story. The Danger Tree is the most immersive, unique art experience you will ever have. It’s about the past, and yet it’s the future.”

Lest we forget, so the saying goes about Remembrance Day. Certainly The Danger Tree exhibition is vividly memorial. It will be especially moving to view the works in the 36 Castle Galleries venues before November 11, Remembrance Sunday, 100 years since the end of the Great War.

Artists' inspiration for The Danger Tree

Marc Marot: “Scarlett and I had different journeys to The Danger Tree. Her father, the late musician Raphael Ravenscroft, filled her with inspiring stories related to the symbolism of the poppy which led her to start painting huge poppy landscapes. “The First World War was a perfect subject for me because my grandfather was a World War One veteran. Eddie Bigwood was born in 1898 and died 100 years later. He joined the Bristol Pals Brigade aged 16 in 1914. At Ypres a shell exploded some ten feet away from him. He lost much of his bottom jaw and 94 per cent of his hearing. After just three months convalescence he was sent back to the front. “He’d not spoken about the war until his mid-80s, and he would tell me incredibly emotional stories that made him weep and chuckle at the same time. Eddie was my hero. This made it a very fitting subject matter for me. I reserved his story right until the end in The Danger Tree programme, because I wanted to honour him. His painting is called ‘Shall I sing to you’. “Scarlett approached me to manage her in 2013. I initially demurred and it was when Steve Spencer, the co-founder of Blippar, showed me what was possible with augmented reality that it got me thinking. I realised that we could combine the technology with Scarlett’s ability to paint beautiful landscapes.  After some discussion we decided to mark the Great War.” Scarlett Raven: “In 2014 we tested the first two paintings in front of 200 or so gallery sales staff. By the end of the day we’d made 26 people cry. This first reaction was a real eye-opener for the both of us. It helped us realise that we were on to something special; the work stirred really strong emotions in everyone. Now, The Danger Tree exhibition regularly makes people cry, and in a weird way that makes us both proud.”