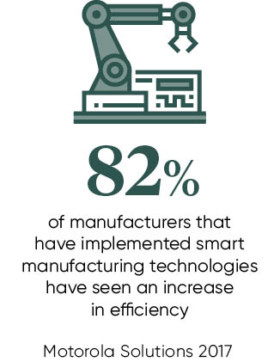 Heralding a new dawn of digital disruption, the industrial internet of things (IIoT), like the sun, is rising in the East. For manufacturing, its application is opening up hot prospects and prompting something akin to a global tech gold rush. Opportunity beckons and the race is on.

It is not, however, a race Europe currently leads, Daniel Keely, manufacturing director, Europe, Middle East, Africa and Russia, at Cisco’s manufacturing practice digital transformation group, concedes. “Manufacturing is undoubtedly a key engine for growth across Europe, with more than two thirds of all EU exports coming from the sector. However, in some critical aspects of digital innovation, Europe is lagging behind its Asian competitors,” he says.

IIoT is transforming manufacturing in Asia, right now, delivering dynamic competitive advantage, IBM internet of things (IoT) distinguished engineer Andy Stanford-Clark concurs. “We are seeing a huge take-up of advanced factory automation in the Far East, particularly in China and Taiwan. They are realising the efficiency benefits that can be gained by the use of general purpose robot arm technology on a production line.”

Rather than designing and building a complex piece of machinery specifically for the purpose of a particular task, manufacturers can take an off-the-shelf six-axis robot arm and program it to suit. With the advent of software-defined hardware, the same robot arm can then be deployed to a different task, just by reprogramming it, making production fast, cheap and agile.

Advances in other areas as seemingly mundane as maintenance can also build a business case for IIoT, adds Mr Stanford-Clark. “Predictive maintenance, combined with traditional schedules, enables expensive downtime to be minimised and elimination of certain fault conditions. Savings due to predictive maintenance have on their own justified companies’ investment in IIoT,” he points out.

Western firms are keen to cash in on these emerging export opportunities, not least in the East. GE, for instance, has been creating what it calls digital foundries, starting in California then opening in Paris and Shanghai.

We are seeing a huge take-up of advanced factory automation in the Far East, particularly in China and Taiwan

While the rate of growth might be slowing in terms of sheer output, the scale of industrial activity in China still represents a huge attraction for global tech players.

China remains the world’s largest manufacturer and also leads on connected things. Accenture estimates that fully embracing IoT in manufacturing could deliver economic value up to $736 billion in total for the period 2015 to 2030.

With a strategy dubbed Made in China 2025, the country’s serial five-year plans are already prioritising advanced automation with a vision of becoming the world leader in precision manufacturing by 2050. Behind this trend actually lies a dynamic shift in the nature of work, as China faces up to the challenge of transitioning away from a business model based on cheap labour, says Mr Stanford-Clark.

He says: “Part of this initiative is to enable human workers, engaged in what are referred to as the 3D – dull, dirty, dangerous – jobs, to move to more fulfilling and less monotonous roles, often working alongside ‘people-safe’ or ‘compliant’ robotic devices.”

So with evidence for efficiency and agility mounting in the East, why is Europe not accelerating progress on IIoT to match?

It is not that Europe does not understand the threat of disruption and need for innovation, argues Mr Keely. “Countries across Europe are undoubtedly adopting IIoT technologies and responding to the challenge of digital disruption in proactive ways,” he says. “The Industrie 4.0 or i4.0 incentive is an example being driven by the German government together with manufacturers such as Bosch and Siemens, while the UK Industrial Strategy places digital at the core of manufacturing.”

The problem is their global competitors simply threaten to outpace them. There is a steep learning curve, says Mr Keely. “While some European manufacturers have begun to connect industrial machines on the plant floor, sharing data among makers, end-users, third parties and so forth is complex. One reason is proprietary protocols, which hinder interoperability,” he says.

“Additionally, in Europe, many manufacturers are small and medium-sized enterprises that lack some of the broader digital capabilities that will be critical moving forward.”

There is, though, cause for optimism around IIoT uptake in Europe, contends Andrew Minturn, business development and strategic product manager at Bosch Rexroth. “It’s picking up speed with major manufacturers now looking to adopt the cyber-physical systems approach to productivity,” he says. “Hardware and software are connected to ensure we can react quicker to product-mix one-offs, with improvement in quality and costs, also delivery.

“We are starting to see the connected value stream which ensures products are delivered at the right time, at the right place, and in the right type and quantities. Uptake will increase tenfold in the next few years.”

Sharing data among makers, end-users, third parties and so forth is complex

Rather less convinced about uptake is Frank Piller, professor of technology management at RWTH Aachen University, Germany. “We see plenty of pilots and little large-scale deployment,” he says. “The number of truly digital, data-driven factories is very low. In Germany, leaders like Siemens with the Amberg factory, or Festo with the Scharnhausen plant, show what can be possible.”

Professor Piller, who heads up the Leading the Smart Factory of the Future programme, identifies standardisation as an area that has been holding back progress with what he describes as a “zoo of competing industry, public and company standards”.

However, this is one roadblock that is about to be removed. Finally, Europe and America are co-operating on a major cross-industry initiative with the launch by German industry of Standardization Council i4.0. “This will become a game-changer and enabler,” Professor Piller concludes.