Although the market for robotic process automation software is still very much in its infancy, it is already starting to make its mark on the business process outsourcing sector.

While most people had not even heard of the technology a year ago, awareness has grown rapidly over the last six months in particular. This has resulted in a number of companies, predominantly in the UK and United States, introducing small proof-of-concept and pilot projects to evaluate its potential for automating carefully selected business processes in a controlled way, before rolling them out more widely.

Andrew Burgess, management consultant and director of services provider Symphony Ventures, explains: “Robotic process automation or RPA implementations are mainly being done on the client side in areas of the business that haven’t been outsourced. People tend to look at automating in-house systems first because they’ve got more control and the savings are more immediate.”

Is it cost efficient?

But this is not to say that the software is not starting to make its presence felt in the business process outsourcing (BPO) world too. According to a study by management consultancy Deloitte, entitled The robots are coming, the cost-savings of deploying RPA technology are far greater than sending them offshore. While an offshore full-time equivalent worker is on average 35 per cent cheaper than a UK-based one, a typical robot comes in at more like one ninth of the price. 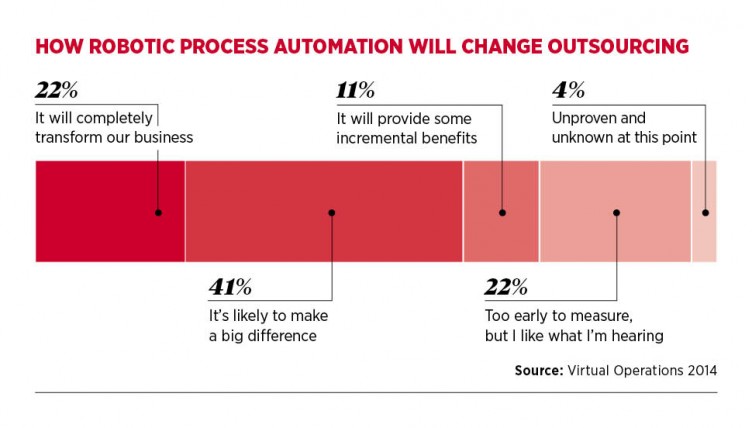 This means customers deciding to go down the RPA rather than BPO route can expect to see the total cost of their service delivery drop significantly.

Tom Reuner, managing director for IT outsourcing research at HfS Research, believes that cost-savings of anywhere between 20 and 40 per cent are possible depending on the nature of the business and where it is based, simply because far fewer people are required to do the job. It also means that customers no longer have to expend time and effort each year trying to wring additional savings out of their BPO providers.

As a result, once the technology really starts to take off, it is likely to have a huge impact on the BPO sector and particularly on dedicated, pure-play firms whose “business model is predicated on labour arbitrage”, he says.

“The broader-based tier-one players will find ways of balancing things out more, although they might see a margin shortfall in the short term,” Mr Reuner explains. “But not a trivial majority of contracts are either fixed price or have fixed-price components, which makes things difficult for them too.”

Are outsourcers at risk?

What this all means, says Symphony Venture’s Mr Burgess, is that as customers increasingly demand processes previously performed by offshore labour be automated by robots, BPO vendors will see big chunks of their revenues and margins hit.

The Deloitte study indicates, for instance, that although only 13 per cent of the shared and global business service leaders questioned in two separate surveys expected to invest in RPA over the next 12 months, the figure leapt to 55 per cent by 2017. 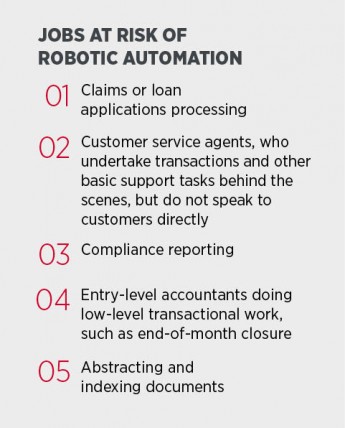 “RPA is a huge threat to the BPO market,” Mr Burgess warns. “It’s an alternative to BPO as nearly anything that can be outsourced can be automated. But the whole BPO labour arbitrage model is based on economies of scale and they’ll disappear, so we’ll see really big changes here in the next three to five years.”

Therefore, this transition phase could be very uncomfortable and lead to big job losses. It will force BPO providers to “move up the value chain” to assume more of a consultancy than a process execution role, with some being better at the transition than others, Mr Burgess says.

But Raheem Hasan, president and chief executive of the Institute for Robotic Process Automation, is not convinced that the BPO sector should be written off just yet.

“The business process outsourcing industry is embracing this as it has seen the train coming,” he says. “So we’re seeing them forge alliance agreements and try to build out ecosystems, or either build or buy technology to integrate into their operations model. RPA is definitely in play.”

But he also acknowledges that suppliers will need to rethink their business models as rolling out the technology into existing accounts will inevitably cannibalise them, leading to lower rate values and better deals for their customers.

So far though the industry itself is being unusually coy in its response to the situation mainly because it has “not yet figured out the impact on revenue and margins”, says HfS Research’s Mr Reuner. 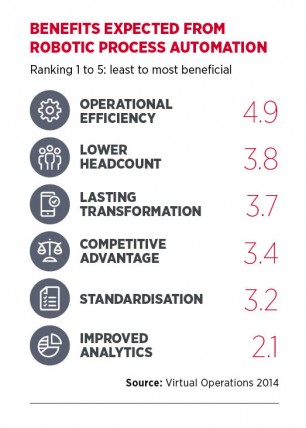 This phenomenon has demonstrated itself in the fact that, while new technology is generally subject to vast amounts of hype, the fanfare around this one has been remarkably low key, not least due to its potential social and political implications.

But on asking BPO providers about the likely impact, Mr Reuner says most give a mix of three answers – redundancy, redeployment and reskilling.

“It would be naive to say that the BPO providers won’t have to change, and robotics generates emotive reactions because the impact on the people side is fundamental and significant,” he adds.

This impact will become even more marked as artificial intelligence software is increasingly added to the mix over the next couple of years, enabling the automation of evermore complex processes.

“Some say that RPA will be a catalyst for higher levels of automation, others that the BPO industry will be destroyed. But no one has the answer just yet – it’s still too early to say,” Mr Reuner concludes.

WHAT CAN ROBOTS DO? 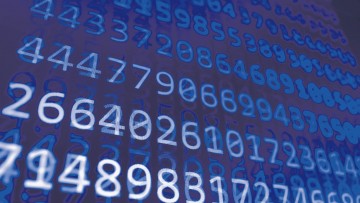 Robotic process automation software comprises sophisticated macros that are otherwise known as “robots”. These robots automate high-volume, repetitive, rule-based tasks, where workers have previously had to access more than one computer system to complete a process. These processes are often dealt with in shared services centres or other areas of the back office.

The software works by communicating with existing applications and systems in order to process transactions, manipulate data, trigger responses and communicate with other computer systems. Unlike humans though, robots work 24x7 and produce very low error rates.

On the other hand, robots are not suited to handling processes that are highly variable, and where judgment and decision-making is required. They are also not necessary in processes undertaken by a single computer system in which there are no interfaces between different applications.

JOBS AT RISK OF ROBOTIC AUTOMATION

2. Customer service agents, who undertake transactions and other basic support tasks behind the scenes, but do not speak to customers directly