Apple Pay went live in July with a thumbprint authenticated, no-card-details-transferred contactless mobile phone payment. This revolutionary model for mobile payments is leading the field in the UK.

Samsung Pay and Android Pay launched in the United States in September with the expectation they will follow in Apple Pay’s route to the UK, although neither Samsung nor Google have confirmed a launch date. Who cares? Shoppers do.

“It’s all about shopping,” says Paul Horlock head of payments at Nationwide. “We get excited around faster payments and paying bills, but from our perspective around 80 per cent of the payments we make every month are point-of-sale payments. We are going to break one billion card transactions this year for our customers’ current accounts because we are seeing that electronic method going through the roof.” 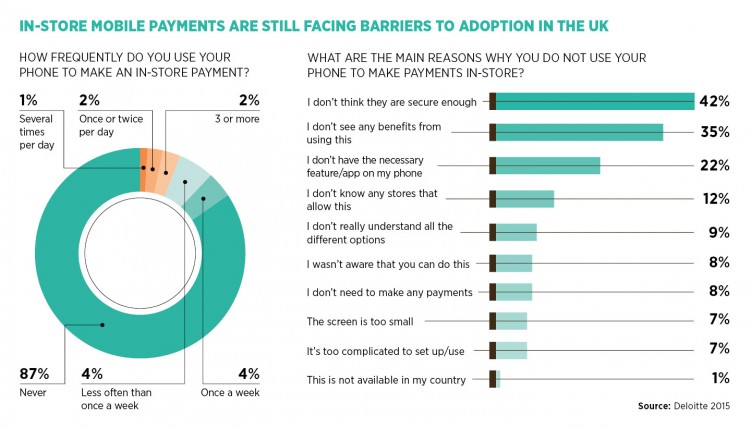 Dan Salmons, managing director of mobile and online at payment technology specialist PayPoint, says contactless card use has accelerated by around 200 per cent year-on-year and is growing by approximately 10 per cent a month, while terminal take-up by merchants has increased by around 50 per cent in a year.

“There is definitely a sustained usage and rollout of contactless,” he says. “Initially there was a very strong take-up of Apple Pay when it launched, but it is not clear how sustained that has been.”

“Apple Pay effectively is the contactless market in the UK at present. Next year we will see Samsung Pay, the Android solution,” he says. “Will mobile be the majority of payments in the next few years? Certainly not, but given the uptick in contactless payments overall, if it can get 5 to 10 per cent of that market in five years, that is very significant.”

Shopping online using a mobile device can be difficult, especially where there is no mobile-enabled payment system. Typically validation requires the user to input a lot of information which might be slow on a PC, but can be almost impossible when using a smartphone while travelling on a bus and with predictive text going awry.

“Activity we used to do on PCs has migrated on to the mobile platform,” says Paul Lee, a partner at consultancy Deloitte, responsible for technology, media and telecommunications research. “There is a growing body of people who now browse on mobile – meaning either tablet or smartphone – but they don’t transact. Next year transactions will get better. Over the next five years they will be massively simplified.”

The arrival of “touch commerce”

He predicts that 2016 will be the year of “touch commerce” whereby third-party payment services can be accessed from any merchant’s website or app to complete a payment including all delivery information.

“That will get rid of a lot of the chore involved in a transaction and can be completed with one touch – that is what we expect for next year,” he says. “If you can get rid of that difficulty, the number of transactions completed by mobile will increase significantly.”

There will be a positive link between the integration of services such as Apple Pay into online shopping and the wider adoption of mobile payments for contactless shopping on the high street, says Mr Salmons.

“Although Apple Pay is focused on face-to-face, for me the real opportunity is getting people to use it in apps. Once it becomes the standard for a lot of in-app payment then that will naturally mean it becomes a logical thing to use at the till.”

The ability for customers to make contactless card payments is seen as part of a journey by payment system providers, as the world moves towards greater use of mobile devices. Apple Pay requires the user to “load” their cards on to the system. To ensure security, when the device makes a payment it does not transfer card details across to the point of sale, it sends a device-specific token and a one-use security code that authorises the transaction.

This token also prevents the collection of data about the purchaser, which has dealt with a long-standing argument between banks, network providers and smartphone manufacturers over who owns the data? By removing this issue, mobile payments have been able to move forward after a decade-and-a-half of failed platforms.

It also represents an advance in mobile technology, allowing users to become more comfortable. So while mobile payment systems are effectively a version of a card transaction, they enable change.

“We see it as a bridge for what comes next in the future of mobile transactions, which may not be card-based,” says Nationwide’s Mr Horlock. “I think contactless is a really good way of trying to explain to people how to live their lives more easily and give them time back in their day. That gives them opportunities to then look at new ways to pay which are coming through the mobile.”

Dr Holden at Juniper Research adds: “If we are talking about proximity mobile payments, then I think the building blocks are in place for us to see some fairly rapid acceleration of near-field communication or NFC payments.”

While the excitement around mobile payments has been palpable, wearable payment devices have not seen the same frisson of excitement. The contactless chips that are contained within a bank payment card are so small they can be held in just about any type of device. 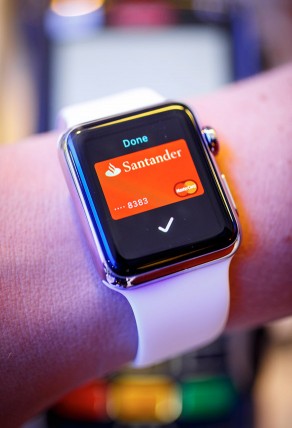 Many payment devices can fall into this category; from the Disney MagicBand wristband that allows the owner to pay for anything at Disney Resort, to the Apple Watch which works as an adjunct to the iPhone, to standalone payment devices such as the Jawbone UP4 (US and American Express only) or Barclaycard’s bPay, which can be anything from a key fob to a wristband or sticker.

Gauging the take-up of these devices is tricky as figures are not published. Apple is keeping schtum about Apple Watch metrics because it says to do otherwise might help its competitors, although it consistently publishes unit sales for the rest of its products.

“We expect to see more launches of wearables – Apple Watch is just the first,” says Dan Salmons, managing director of mobile and online at payment technology specialist PayPoint. “With firms like Jawbone announcing payments being added to a fitness product then I think you will start to see mini ecosystems popping up, some of which will work with each other.”

However, Dr Windsor Holden, head of forecasting and consultancy at Juniper Research, offers a note of scepticism about the potential market for these devices.

“I am not seeing any compelling use cases to fork out for a smartwatch,” he says. “From a payments perspective, if you are going to use something other than a contactless card you are far more likely to use a smartphone than a watch.”