Are connected homes just a short step away?

For some the idea of your fridge “speaking” to your cooker then informing you, while you’re at work, that there are not enough eggs for the planned meal is the stuff of sci-fi dreams. For others it’s more of a dystopian nightmare with technology intruding into an otherwise already cluttered day. And yet the connected life for consumers has been heralded for some years, each prophet promising it’s just around the corner.

“But we are at a tipping point,” says Lionel Guicherd-Callin, European head of product management for Nest, a market leader in connected thermostats and security devices. The company has seen 50 per cent growth year on year. “Demand is there. There are more efficient ways to get products into the home now and the products are that much better too.

“If you look at the time it took tablets to become widespread, uptake for connected devices for the home is very good, especially given that many home appliances typically have a ten-year life cycle. Those early adopters aside, we don’t tend to upgrade these things like we do our phones.”

Indeed, the last year has seen a proliferation of new “smart” additions to the sphere of connectivity, many from startup companies, albeit some under the umbrella of established players. For example, Amazon’s Echo-Alexa, Google’s Google Home hubs, Belkin’s WeMo Switch, August’s Smart Lock, Emerson Sensi’s Wi-Fi Programmable Thermostat, Ring’s Video Doorbell, Sleep Number’s IT Bed, Neato’s Botvac cleaner and June’s Intelligent Oven, among others. And, yes, Samsung’s Family Hub Refrigerator will display its contents via your smartphone.

Not that the advent of the connected home, or for that matter, the connected person, car, aircraft, drone, factory or city, is without its obstacles. Certainly many providers of such products have, says Mr Guicherd-Callin, made a crucial step-change in starting to think like consumers rather than engineers.

“Building in simplicity has been essential,” he says. “If a device is linked to your smartphone, the first question can’t be whether it’s compatible with Apple or Android, for example. It’s very easy for the tech industry to get carried away with the tech. It’s easy to say and not easy to do, but the tech has to be helpful.”

Take-up is likely to be slow, steady but incremental as each system proves itself to be a solution to an identifiable problem

Indeed, the industry’s enthusiasm for a wholesale digital overhaul of our homes is, in the medium term, likely to appeal primarily to those early adopters. Mr Guicherd-Callin insists that, beyond these tech-savvy kinds, most consumers remain, for the moment, both confused by what the market has to offer and a little suspicious of the supposed appeal of “some kind of Jetsons’ house, the idea of which can feel a little gimmicky”.

Rather, he says, take-up is likely to be slow, steady but incremental as each system proves itself to be a solution to an identifiable problem. “That may be to save energy or to allow someone to monitor their home while they’re away,” he says.

The advent of 5G, which should arrive in the UK by the end of the decade, is predicted to offer a 100-fold throughput over 4G, making a connected life at least feasible. But even then there are big-picture concerns, notably the lack of interoperability, security, privacy, safety, ownership of the data these devices will generate, decipherability of that data, connectivity issues and, on a day-to-day basis, just trust in reliability. 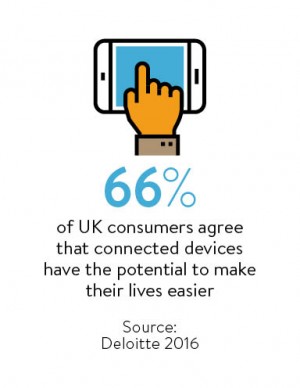 The digital world may be ethereal, but here we’re ultimately talking about hardware, machines that need to be well designed and are expensive to develop. And it is this distrust in half-cocked products rushed to market, argues Stirling University’s Dr Marwan Fayed, a lecturer in computer science and leading researcher into the allocation of wireless resources, that means a connected life could be two generations away, one to make the shift, a second to fully embrace it.

“I desperately want my life to be more autonomous than it is now. I want to be able to ask my coffee machine for a latte from my bed. But such a system would only have to go wrong rarely for the amount of energy I’d have to invest to correct that small failure to spoil the whole benefit for me,” he says.

“At the end of the day I might just as easily get up and switch the coffee machine on myself. Yes, the digitally assisted life – connectivity to help you do what you already do – may be just around the corner, but that’s just a first step. What most people imagine is some way off.”

When it comes, however, the effects could be profound. While Peter Cochrane, ex-chief technologist for BT and now a consultant to the tech industries, worries about the incredible energy consumption required of “50 billion more devices” – and that could be a conservative estimate – and their impact on the digital infrastructure, he also sees greater connectivity and its information feedback as transforming more than first-world problems, healthcare, for example, among other macro concerns.

“It could transform the way we maintain the things we use and just-in-time manufacturing too,” he says. “We’ve been saying the connected world is just around the corner for 20 years. It’s more a question of it crawling into view. But then it will really change the way we live.”