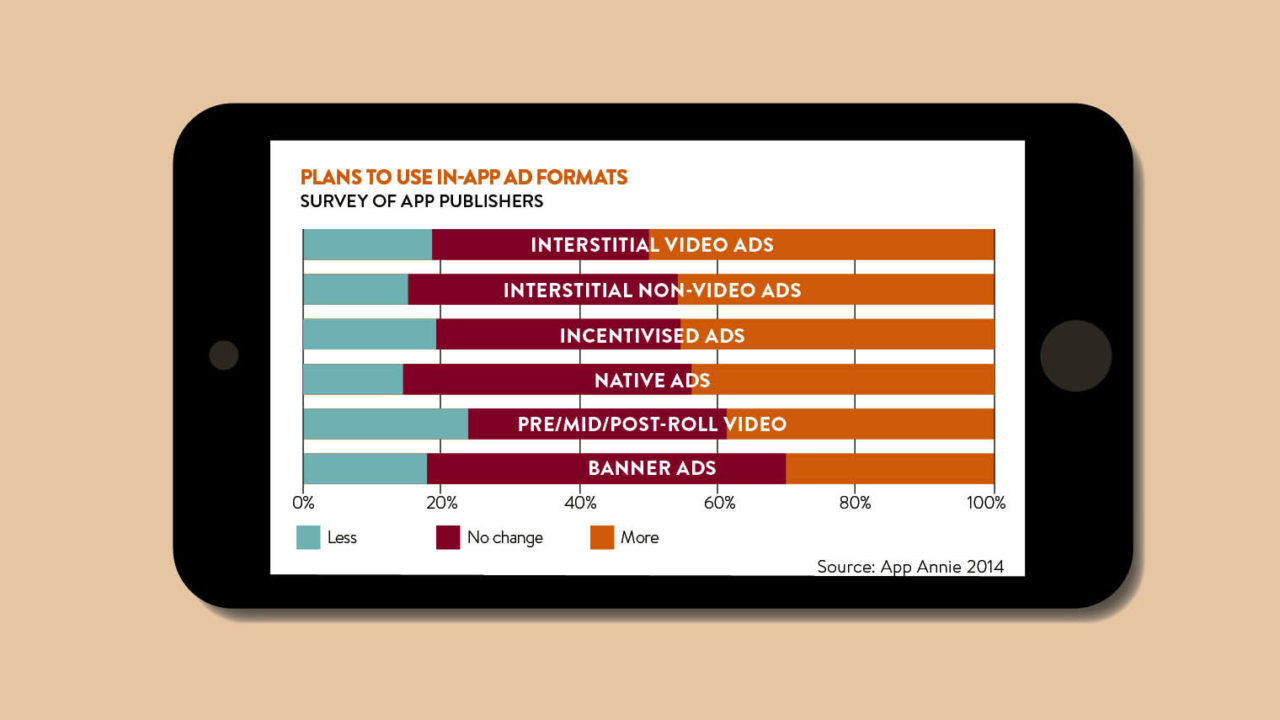 Mobile apps have transformed online advertising. Companies know much more about their users and can serve them with more relevant and timely messages.

Apps are rich in personal data because mobile users download them and often have to log in personal details, allowing much greater opportunities to track and target them than on a web browser.

As Daniel Joseph, strategy director and co-founder of The App Business, which helps organisations such as the Met Office and News UK to develop their app strategy, says: “The more an app knows about the user and the more of this it can pass back to ad networks, the more precisely advertisers can target their ads and the more effective they’re likely to be.”

Ultimately, it means a brand can produce an ad that is personalised for a particular user on a particular device. This trend has been dubbed addressable advertising because the message, the time of day, the location and so on can all be tailored or addressed to that user in a trusted “walled garden” environment, so long as the user has given permission, or their personal data is used on an anonymised basis.

The impact goes beyond advertising. The intuitive nature of in-app payments makes it easier for companies to drive purchases because customers’ bank details are often stored in the app after their first purchase.

The department store chain John Lewis is a good example of how mobile and the app, in particular, is no longer just a communications channel, but a sales tool. Some 21 per cent of its online customers now order via smartphone and 31 per cent order via tablet. Domino’s Pizza says its app is its most important sales channel, driving almost 50 per cent of all sales – a huge shift in just a few years.

Indeed, for some mobile-first companies, such as Uber and Snapchat, the app is their core business, blurring the line completely between the marketing for the app and the utility of the service.

Keeping up with mobile tech

The revolutionary impact of apps on advertising can be traced back to Apple’s launch of the iPhone in 2007 and App Store a year later.

Libby Robinson, Europe, Middle East and Africa managing director of the advertising agency M&C Saatchi Mobile, says: “Smartphones know everything about their owners and they are rarely more than a few feet apart at any time. Therefore, the ability for a mobile app to provide personalisation is unrivalled by any digital platform.”

The challenge for companies is to keep pace with the fast-changing app economy. Ms Robinson warns: “The in-app ecosystem is intrinsically more complicated than desktop.”

Part of the reason for the complexity is that there are thousands of handsets with varying screen sizes and different mobile operating systems, so there is not an easy, one-size-fits-all solution.

Then there is the lack of cookies, the tiny, tracking devices that are used on web browsers. That has meant brands and advertisers have had to create alternative identifiers, such as user log-ins to track and analyse campaigns, says Ms Robinson. 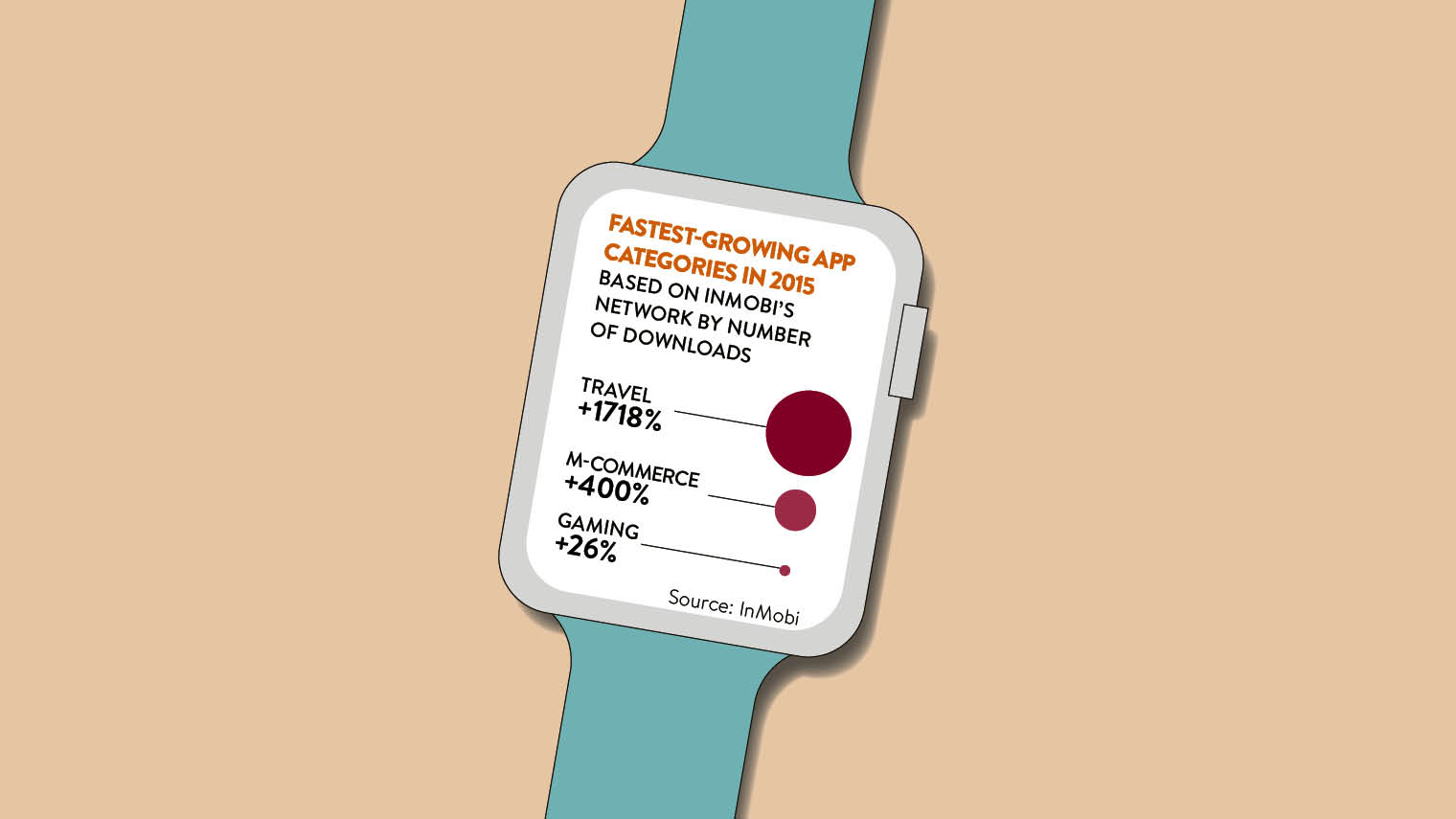 Mr Joseph says brands have to think differently about how they create ads in apps because, in some cases, consumers have reached saturation point and are rebelling, even though he plays down the threat of ad-blocking.

“In most apps, advertising is integrated in the same way as it is on the web,” he explains, referring to the traditional banner or pop-up ads. “This is simply a generic, one-size-fits-all approach that can – and frequently does – detrimentally affect the user experience on mobile. So it should be no surprise that the advertising returns are low when this approach is taken.”

The growth area is native advertising where the ad is integrated into the app – for example, in a user’s Facebook feed – and that “presents the opportunity to enhance or complement, not detract from, the user experience”, according to Mr Joseph.

Ms Robinson says: “A native app experience allows greater functionality as it is integrated with the operating system of the phone and it also allows for the correct tracking.”

User experience at the core

Interestingly, many retail brands are using their advertising, both online and offline, to encourage installations of their own app because they want as much first-party data as possible and it can increase sales.

In the case of John Lewis, driving users to its smartphone app was “five times more efficient than driving them to the mobile site”, says Ms Robinson.

Just Eat, the online food delivery company, says its app has improved customer retention and frequency, as well as attracting new consumers, and this is why some of its most recent advertising makes no mention of its website.

Consumers’ expectations have risen sharply in a short space of time because of the popularity of smartphones, increasing the pressure on brands to create a better app experience.

“Establishing a role for their app is the most important thing that businesses need to understand,” says Ms Robinson. “While an app can drive return on investment, increase high-quality users and improve the overall brand perception, unless the user has been considered at every stage of the process, this can result in a confusing user experience. This could mean low ratings, low app installs and negative brand perception. Apps that perform the best usually serve one purpose well.

“A well-designed and maintained app experience can be a powerful customer relationship management tool that allows constant re-engagement with a loyal customer base.”

Domino’s claims so many customers have installed its app that the success has allowed the company to switch some of its ad spending from online to conventional media, such as its sponsorship of Channel 4 TV soap Hollyoaks to keep brand awareness high – a reflection, perhaps, that the small screen on a smartphone has creative limitations for advertising.

It is not easy to get an app noticed, even with advertising. “Creating branded destinations for audiences, especially on mobile, is becoming increasingly difficult particularly on mobile where the app store discovery experience is broken,” says Emily Forbes, founder of Seenit, a video curation app company that works with many media and financial services clients.

She points out that the average user has 100 apps on their phone at any one time and is likely to use only 20 regularly. “The answer for brands is to create compelling and interesting content to live inside the most used of the 20 apps, such as Snapchat or YouTube. Then you immediately have the widest possible distribution at the lowest cost. Take your content to the audience; don’t make the audience come to you. To get ‘mobile’ you don’t need to create an app, you need to create an engaging mobile web experience,” says Ms Forbes.

The app experience is increasingly moving beyond mobile to other forms of media, such as TV.

Sky’s latest internet-connected set-top box, Sky Q, feels more like an app – or, more accurately, a collection of apps – as the user experience is designed to be intuitive, with other services such as YouTube and Facebook integrated into a menu of TV viewing options.

As apps become the primary way that we access and navigate the digital ecosystem, the opportunities for advertisers to target specific audiences across different devices and platforms will only increase.