Tomorrow’s energy market will be the polar opposite of our historical centralised distribution, but we must plan for the future with a clear vision of how innovation and system integration will transform the UK’s energy mix, writes Felicia Jackson

Transitioning the UK’s electricity supply to accommodate a lower carbon emission environment is going to have a significant impact on its future generation mix – a greater use of renewables, nuclear, gas for generation, carbon capture for existing coal-fired stations and more.

Simon Reader, head of corporate communications at RES, says: “The Large Combustion Plant Directive (LCPD) will see a reduction of 13 per cent in coal-fired generation before 2020, with an almost total phase out of coal after 2030, other than the more expensive route of new coal plants fitted with carbon capture and storage technology.” This will mean an increasingly dominant role for renewables. In its Gone Green projections to 2035, for example, National Grid suggests that renewable generation could reach 100 gigawatts (GW) by 2030.

How that will impact the energy mix, however, remains down to the policy environment. Contracts for difference – long-term contracts to provide stable and predictable incentives for companies to invest in low-carbon generation – will have a clear impact on the uptake of nuclear and renewables, with the biggest impact seen from 2025 onwards.

Matt Germain, associate director in the environment group of international law firm Osborne Clarke, says the contribution of on and offshore wind and solar can be predictably forecast; a bit like nuclear if the new fleet is built up. Contributions from energy from waste and on-farm anaerobic digestions are harder to predict, yet both can provide a decentralised source of base-load power.

Distributed energy, especially residential solar, could also potentially be a game changer. Ian Thomas, managing director at Turquoise International, points out: “There is a societal change where people want to control their energy usage; there is a growing interest in distributed generation of all kinds,” he says.

And as Toby Ferenczi, founder of home energy service provider Hanergy UK, says with householders able to make up to 12 per cent return on investment on residential solar, it’s moving from niche to mainstream.

Efficiency, both industrial and domestic, will have an impact on demand and the energy mix. Mr Reader says: “Once – if – the poor participation in the government’s efficiency programmes are overcome, then further increases will largely depend on the adoption of new lifestyles, for example self-consumption using PV [photovoltaic solar panels] and new policies, such as those that support residential battery storage combined with PV, as is the case in Germany.”

With householders able to make up to 12 per cent return on investment on residential solar, it’s moving from niche to mainstream

It is efficiency in combination with demand response that has the greatest potential to impact the energy mix, by manipulating load to match demand. The implementation of smart meters and smart grid enable more active local networks, which also impacts market structure.

David Hill, business development director of Open Energi, says: “Other new technologies, such as active network management systems and new electricity storage techniques, are also facilitating an entirely different way to balance supply and demand, where demand can be as flexible as generation.

“The introduction of the capacity market should … encourage the development of demand response especially where it is allowed to compete on a level playing field with traditional generation.” 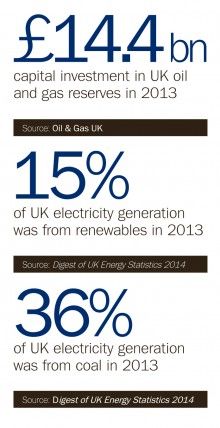 Yet it’s possible that demand response operators will not be able to participate in the December 2014 capacity market auction, only in subsequent 2015 and 2016 auctions, for a capped 400-900 megawatt (MW) volume. This assumes that demand response will contribute just 1 per cent of peak demand, with no prospect of this increasing any time soon, as generators will have a 15-year hold on capacity contracts.

The biggest question though is the future role of energy storage. Given the intermittent nature of many renewable sources, demand for grid-scale energy storage is growing rapidly. Storage supports the grid in terms of avoided wind curtailment and infrastructure upgrades, reduced reserve power and CO2 from open-cycle gas turbines, and in absorbing reactive power.

At the moment the UK has just 2.8GW of grid-scale storage at four sites, all of it pumped hydro and the most recent of which was built more than 30 years ago. As such, the UK has 2GW less storage than it needs now and is expected to have a 6GW deficit by 2020. One of the challenges is the difficulty in comparing different types of energy storage. There are a broad range of available technologies, with different sizes targeting different markets, from power management, large scale, micro and so on, ranging from flywheels, batteries, compressed air, pumped storage and power-hydrogen storage.

“The use of a chemical storage solution, such as hydrogen, offers a very viable and practical option for mass energy storage,” says Dr Henri Winand, chief executive of Intelligent Energy. When renewable energy is converted to hydrogen, using electrolysis, it can be used and stored in a number of ways. For instance, it can be co-mingled into the existing natural gas infrastructure as a method of storage and transportation for when energy is needed most. Gas-fired power stations could also use this natural gas/hydrogen feedstock directly for energy production using upgraded turbine combustion technology for gas-to-power re-electrification.

The problem is there is no real strategy for storage in the UK. In Belgium, demand and generation are treated as equivalent technologies, which would need to happen in the UK for demand response to operate at a significant grid scale. As Turquoise International’s Mr Thomas points out, at grid scale, the system is not set up for storage. In the UK, the electricity supply chain has been disaggregated, meaning no one company can take full advantage of synergies across the supply chain. Without a strategy, it is difficult to plan for a developing market.

The UK is set to lose some of its old generators and that power must be replaced, but the challenge lies in how. Tomorrow’s energy market will be the polar opposite of our historical centralised distribution – it will be bi-directional, flexible, potentially distributed and clearly varied.

To ensure the UK makes the most of the opportunity, we must plan for the future and that means more than 1 per cent peaking demand for demand response. It’s time for vision and a clear path on how innovation and system integration will transform the UK’s energy mix.