It may seem like a cruel joke to millions of people frustrated by poor connection to the internet on their 4G mobile phones. But the government has already embarked on the journey to 5G, promising to place the UK at the vanguard of technologies that will transform our lives.

Chancellor Philip Hammond has committed an initial £740 million to the development of the next generation of mobile technology, and Huawei and Megafon expect to have a pilot network in place by 2018, in time for the FIFA World Cup in Russia. These are exciting times, it seems.

Heard it all before? Perhaps. But 5G really does have the capability to deliver a step change of ultrafast, reliable mobile connectivity able to support society’s ever larger data requirements and the widest range of new applications. From connected and autonomous vehicles to the internet of things (IoT), the next generation of mobile technology has the potential to be transformative across a number of sectors, including health, transport and education. 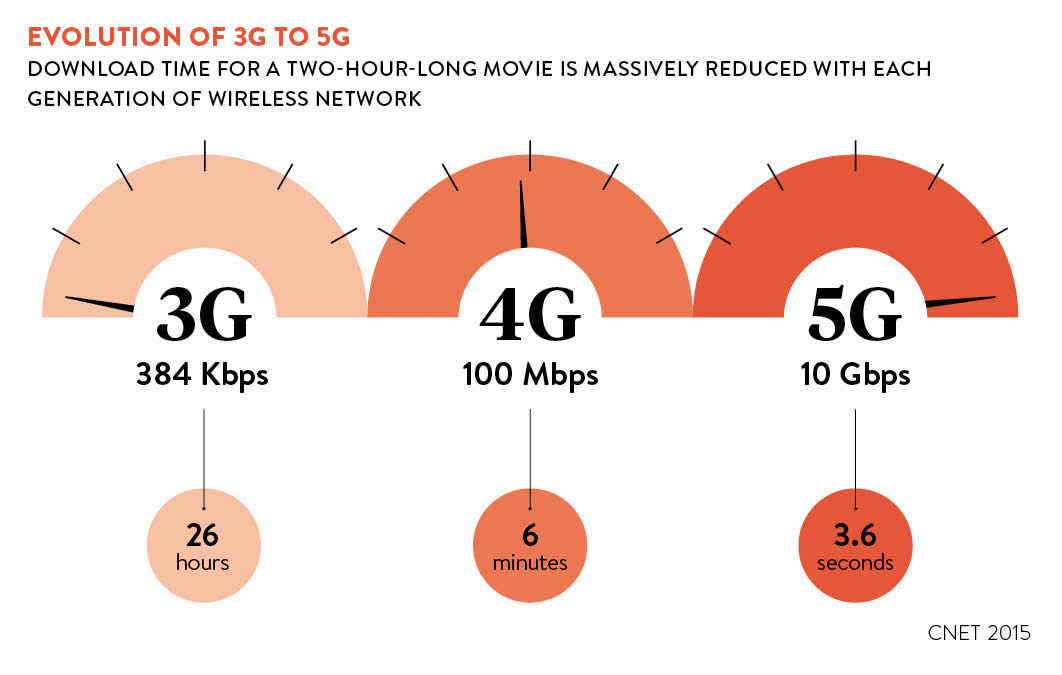 The facts about 5G

5G promises so much more than shiny new mobile phones able to download video clips in microseconds without buffering. It will become the spine of the UK’s digital infrastructure, connecting the country to emerging technologies that will be critical to economic growth.

It will facilitate a wide range of new services to diverse sectors, such as smart cities, e-health, energy management, cloud computing, augmented and virtual reality, autonomous vehicles, online gaming, and enhanced mobile broadband. It will also be an underpinning technology for IoT, connecting intelligent devices, such as gas and electricity smart meters.

Ultra-reliable and low-latency communication made possible by 5G will be needed for the control of machinery in highly automated factories and for management of mission-critical assets, such as in the utilities industry.

There is no launch date for 5G, either in the UK or internationally. As it stands, analysts expect the global rollout of 5G to begin in earnest in 2020, although the bulk of subscribers are likely to be in Asia in the early stages, rather than Europe. Work on the development of 5G technology has been taking place in South Korea since 2008.  The UK may not see significant take-up of 5G until the middle of the next decade.

5G will not be a single network akin to the 3G and 4G deployments in the UK. Instead, we are likely to see the convergence of existing mobile generations and fixed networks, and introduction of evolved versions of 4G, before 5G technologies emerge.

By a twist of fate, the emergence of 5G coincides with the process of Britain’s departure from the European Union. New trade relationships will test the competitiveness of the UK economy like never before, and the adoption of the latest digital technologies across manufacturing and services industries will be crucial if we are to be successful outside the EU.

Opportunities afforded by 5G are exciting indeed. Yet the scale of the challenge is daunting, if the UK is to avoid the mistakes that dogged the development of earlier mobile technologies. To put this into context, Britain is 54th in the world for 4G, behind countries such as Peru, Jordan and Albania, with typical users only able to access 4G 53 per cent of the time because of the digital deserts that persist, even within our city centres.

The UK was significantly later than other countries in making 4G spectrum available and operators are still in the process of deploying 4G networks. Gaps in current 4G networks mean that around 20 per cent of urban premises and almost 80 per cent of rural locations are in a not-spot for 4G coverage.

Despite these problems, 4G has delivered applications that were unthinkable a decade ago. 5G will be even more central to the development of the technology that will be the backbone of manufacturing and services in the future. Realising these benefits will require the deployment of tens of thousands of new small cell mobile base stations connected to fibre optic cables, which will necessitate investment, co-ordination and removal of a number of regulatory barriers. 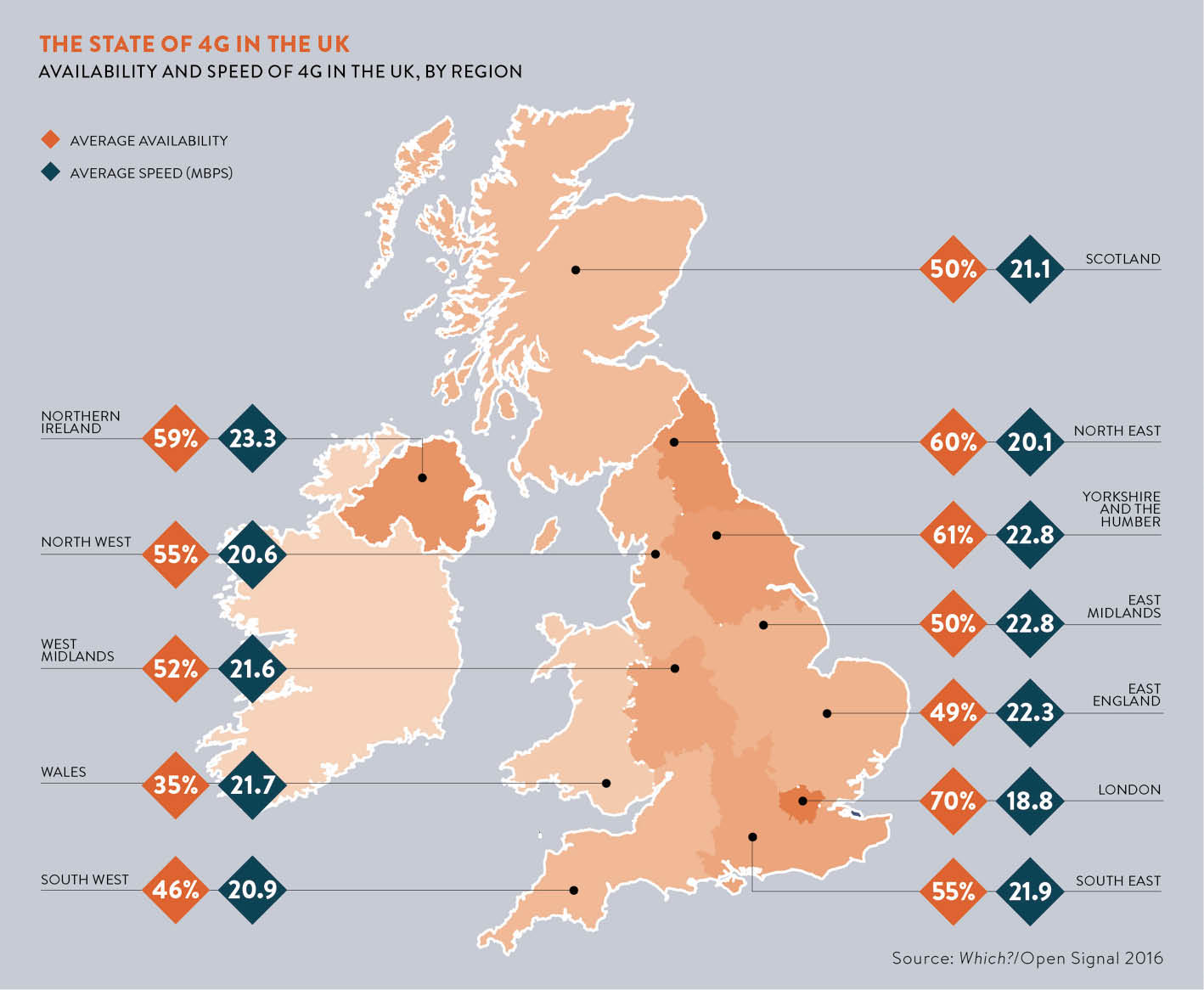 A report by the National Infrastructure Commission late last year urged the government to put digital infrastructure at the heart of its industrial strategy, ensuring that the UK can take full advantage of technologies such as artificial intelligence and augmented reality, and the needs of new industries, to improve productivity and develop the businesses of the future.

It called for a standalone government department with responsibility for digital infrastructure to address the current fragmentation of interests. Its core role would be to identify the public projects that contain a significant element of digital infrastructure, and establish and maintain a plan which sets out how they can help deliver the government’s overarching digital strategy.

The department would also ensure that when upgrading existing or delivering new infrastructure, the long-term capacity needs of telecoms networks are considered and met. This could include installing more fibre and additional infrastructure to make sure networks are future-proof.

Roads and rail provide an opportunity to embed 5G technologies in UK infrastructure, according to the Commission. Given the importance of road transport, the impact that technology can have on the sector in the future has the potential to be transformative.

Significant investment has driven progress in the development of connected and autonomous vehicles, including government support for research and development, but ensuring the necessary underpinning digital infrastructure is in place will be critical if the UK is to take advantage of this technology. It must also address the connectivity needs of passengers, removing the blackspots that blight much of the motorway network.

5G also offers the potential for high-speed connectivity on the rail network through a new trackside infrastructure to replace the existing mobile networks of towers set some distance from railway lines.

The UK has been languishing in the digital slow lane for too long and the arrival of a new generation of digital technology via 5G gives an opportunity to repurpose our infrastructure, at a critical time for the UK economy. The next generation of mobile connectivity will need to deliver the right type of networks, in the right places, for the services that people and business need. This means 5G networks cannot be thought of in isolation, but must be considered as part of a wider ecosystem of mobile connectivity.