Formula E has attracted a high calibre of world-class international racing drivers, who are a mix from Formula 1 to Le Mans. Here are five rising stars…

One of the first major drivers to join Formula E, Brazilian Lucas di Grassi, of German team Abt Schaeffler Audi Sport, is a former GP2 Series runner-up and ex-Formula 1 driver with Virgin Racing in the 2010 season.

Formula E started well for Di Grassi when he made history by claiming the inaugural race victory in Beijing in September 2014. Since then he has remained consistent and delivers solid performances under pressure.

In season one he displayed superb form, but ultimately finished in third place, just 11 points behind Nelson Piquet Junior. Season two has been a commanding year for Di Grassi, as he has dominated the front of the grid, repeatedly finishing high in the points. He holds the record for being on the podium in seven out of eight races this season and of those, three were wins.

Di Grassi currently leads the championship, but has hot competition.  He has always been a huge ambassador for the sport and believer in an alternative electric powertrain. He also races hybrid sports cars in the World Endurance Championship for Audi Sport. 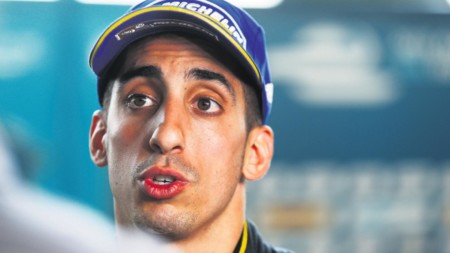 Swiss star Sébastien Buemi, with Renault e.dams, is also hoping to claim the championship title. Buemi started season two with high hopes and the odds were in his favour after pre-season testing, having missed out on the inaugural Formula E championship title by one point.
This season the rules were opened up allowing teams to develop the powertrain from the battery backwards, allowing changes to the motor, inverter and rear suspension. Renault e.dams were quickest on the track by some margin, so Buemi began in a strong position and the consensus was he could run away with the championship. But after mistakes in qualifying and a problem with the car’s braking system, he fell behind Lucas di Grassi.

Buemi is fast – he has clocked the Visa fastest lap no less than four times – but despite his notable pedigree, he shows signs of cracking under pressure. However, he has an impressive racing record, as a former Formula 1 driver for Scuderia Toro Rosso for three years, and is currently a test driver at Red Bull Racing and driver for Toyota in the World Endurance Championship, which he won for the LMP1 class in 2014.

Sam Bird is one of three British racing drivers and makes up one half of the only British team, DS Virgin Racing. Former Formula 1 Toro Rosso driver Jean-Éric Vergne completes the outfit. Bird is also one of 11 Formula E drivers who competes in the World Endurance Championship, for the Ferrari team.

Currently third in the Formula E championship, Bird’s driving style is well suited to the e-cars. DS Virgin opted for the single-gear, twin-motor solution, resulting in a much heavier rear end of the car making it difficult to handle around the tight corners of the Formula E circuits.

Fortunately, Bird is a smooth driver and good at carrying momentum through the corners. This has not only helped him get round the track faster, evidenced by his three pole positions, but also more efficiently, which is critical in a championship with energy management at its heart.

Bird secured DS Virgin’s first win of the season when he held the lead throughout the Buenos Aires ePrix in February, crossing the line ahead of Sebastian Buemi and Lucas di Grassi.

Son of four-times Formula 1 world champion Alain Prost, Nico Prost is making a name for himself with the Renault e.dams team. But he has perhaps the added pressure of being under the management of his father, along with the founder of the DAMS team Jean-Paul Driot.

Nico has finished in the points in six out of eight races this season. It’s an impressive achievement for the Frenchman, but perhaps expected when you are sitting in the cockpit of what should be the fastest car on the grid. He holds fifth position in the Formula E championship.

A longstanding racer in the World Endurance Championship for Lotus Rebellion Racing, he also competes in the Andros Trophy French national ice-racing championship and is a reserve driver for Lotus F1.

Nico was the first driver to achieve a pole position in Formula E in the inaugural 2014 Beijing ePrix. He led the race until the last lap when he was involved in a collision for which he was subsequently given a ten-place grid penalty for the following race in Malaysia where he was again fastest in qualifying.

Another famous son, Brazilian Nelson Piquet Junior is the defending Formula E champion. He has rebuilt his career after leaving Formula 1 amid scandal following a crash in the 2008 Singapore Grand Prix.

Hired first by China Racing, his 2014-15 Formula E campaign began well with podium finishes in Punta del Este and Buenos Aires, and his first Formula E victory at Long Beach, followed by a second in Moscow.

Currently languishing in 16th position in the championship, Piquet has always been the master of energy management, although his NextEV TCR team has struggled to provide a competitive car after choosing the single-gear, twin-motor option for its season two powertrain.

Although Piquet has blamed his poor performance this season on the car, it is worth noting that his British team mate Oliver Turvey has outpaced him on more than one occasion. Piquet has only finished in the points once, but has signed to NextEV TCR for at least another season.

He was runner-up in the 2007 GP2 Series, fourth in the 2014 Global Rallycross Championship and seventh in the 2012 NASCAR Truck Series.