Women and pensions: progress made but more to do

There has been concern for many years among companies, pension providers and government about women’s pensions and the structural inequalities in the system that put women at a disadvantage.

The good news is the number of women saving enough for their retirement is rising. Just over half (52 per cent), according to research published last year by Scottish Widows, are making adequate provision, and this suggests that auto-enrolment and other reforms are having a positive impact.

However, women still lag behind men, for whom the adequate provision figure is 60 per cent, according to Scottish Widows’ research. It was also revealed that a quarter of women are saving nothing for their retirement compared with just 15 per cent of men. Nearly three quarters of women asked (71 per cent) didn’t know how much they’d need to save for the retirement income they’d like and more than a quarter (28 per cent) said the income they received in retirement was less than they had expected. 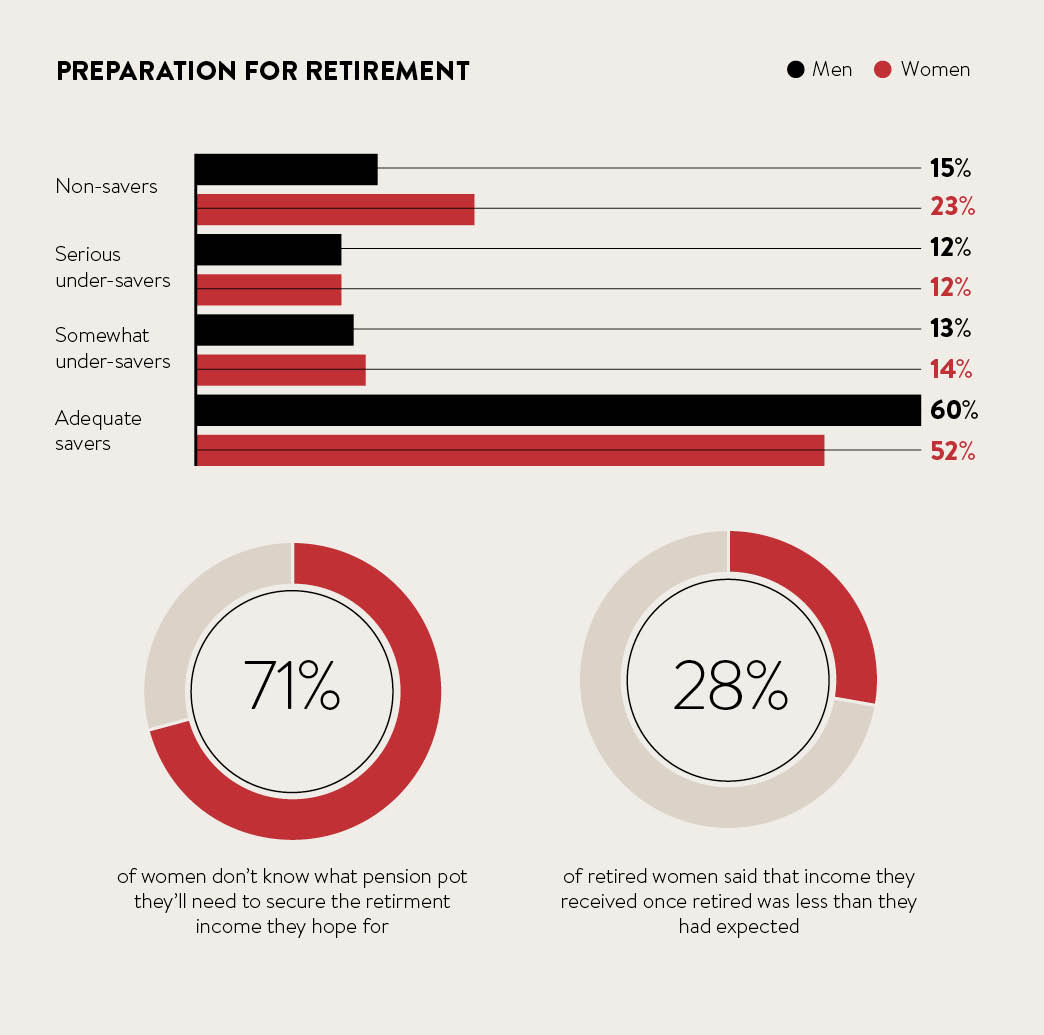 So, as the government attempts to persuade more people to save for their retirement, what are the reasons for this discrepancy between the sexes? At least some of the factors have been widely discussed, but their full impact is not completely appreciated. The raising of children, for example, is frequently cited, but this period can take longer than many realise, with 44 per cent of women aged 55 to 65, according to Scottish Widows’ research, saying supporting children is still a major financial pressure, compared with 38 per cent of men.

Scottish Widows has been commissioning research into women and retirement, and publishing reports on the subject for the last 11 years. It has supported research by the Fawcett Society, the UK’s largest membership charity for women’s rights, aimed at gaining a deeper understanding of the specific challenges women face in preparing for later life. The research is also intended to help shape policy in order to remove these barriers.

The Fawcett Society has identified what it calls a “triple cost” for mothers. Firstly, time taken off for maternity leave cuts income and pensions payments. Secondly, many mothers go back to work on reduced hours and, thirdly, a significant number then have to pay for childcare costs.

It’s great that women are saving more for their retirement but, as our research shows, they’re still not putting enough aside

“Your requirements sort of end up bottom of the pile,” is how one respondent put it. Little wonder then that when it comes to divorce settlements, three quarters of the women surveyed reported pensions were not mentioned.

Another factor is that men’s earnings continue to outstrip those of women. While just 14 per cent of men earn less than £14,000 a year, the figure for women is 25 per cent. Furthermore, according to Fawcett Society research, some women still regard pensions, along with personal finance generally, as something for men to handle. Scottish Widows research shows 43 per cent of women say they have little or no understanding of individual pension savings.

“It’s great that women are saving more for their retirement but, as our research shows, they’re still not putting enough aside,” says Jackie Leiper, director of employer relationships at Scottish Widows. “There’s an opportunity here for forward-thinking employers and pensions providers to take the initiative, and be creative to encourage and empower women to improve their understanding of the issues and ultimately to ensure they build up an adequate pension pot.”

She argues that the workplace is where much of the effort must be made. “It’s ideally suited because many women look to their employer for support and help when it comes to retirement planning and budgeting,” says Mrs Leiper.

“We’re seeing an increasing trend towards employers wanting to provide support specifically for their female workers. This is something we’re keen to encourage and we’re already working with some employers to help develop communications that reflect the needs and attitudes of this particular audience.”

The company is producing information about pensions and issues that female employees in particular face, such as maternity leave and returning to work part time on a lower salary.

“Women don’t want to be patronised,” says Mrs Leiper, “but employers need to adapt both the media and the message around pensions to resonate with and engage women more effectively.” This is why Scottish Widows has partnered with Mumsnet to produce a series of short films on YouTube aimed at answering women’s most frequently asked questions about pensions.

The issues addressed during the films, which each last around a minute, include “How do I set up my pension?”, “Should I keep paying into my pension when I’m taking time off to have a baby” and “I’m getting divorced. What should I do?” Another topic covered is whether to keep paying into a pension during maternity leave. There’s also a special Mumsnet retirement Q&A page on the Scottish Widows website with answers to questions such as “How much should I be saving?” and “What is auto-enrolment?”

Mrs Leiper concludes: “Just like men, women face many demands on their finances and paying into a pension can feel like a burden that they’d rather put off. We’re pleased to see more women are saving enough, but they still need to do more. It’s up to employers and pension providers to help them.”

Scottish Widows was founded in January 1815 by a group of eminent Edinburgh gentlemen. Their purpose was to set up “a general fund for securing provisions to widows, sisters and other females”. Today, more than 200 years later, Scottish Widows provides services, such as pensions, life cover, critical illness, income protection as well as savings and investment products, to around 6.4 million people.