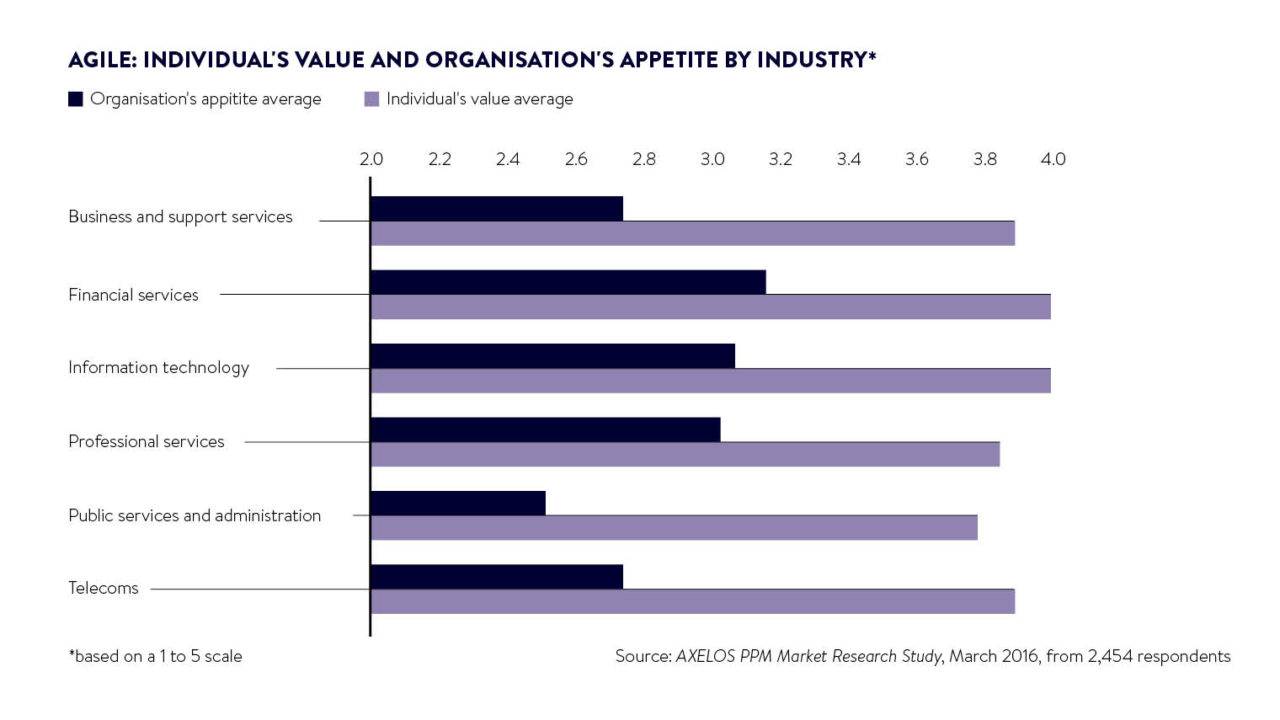 Agile project management helps organisations gain an edge over competitors that have still to take advantage of its flexibility and responsiveness.

Yet surprisingly, while the use of agile in project management is now well established among professionals, many organisations find the adoption of agile a challenge.

In a new report by AXELOS, which surveyed almost 2,500 professionals, a large majority, 81 per cent, saw value in working in an agile way. It also found that the appetite for agile methods among individual professionals was on average 37 per cent greater than that of their employer.

This apparent lack of confidence among organisations in agile methods has created something of a disconnect between the belief that professionals have in the value of agile and how it is used in their workplace.

AXELOS, which owns a number of global best-practice methodologies, is a pioneer of agile. Last year it launched PRINCE2 Agile, which combines the flexibility and responsiveness of agile delivery with the established and proven best-practice framework of the world’s most recognised project management method.

According to PRINCE2 Agile’s lead author Keith Richards, it isn’t just the bottom-line benefits, such as earlier project completion and return on investment, which organisations are missing out on by failing to adopt agile. They also run the risk of losing valuable talent.

“Those individuals who have embraced agile, as highlighted by the report, may well decide to move to organisations that are more readily agile,” he says.

What is behind this reluctance to move with the times? Mr Richards believes it may be a simple fear of change.

“For some organisations, agile can feel scary, uncomfortable and counter intuitive,” he says. “A lot of people are still used to and choose to stick to the waterfall way of working. But a reluctance to embrace change puts organisations at risk of becoming out of date very quickly or at least becoming marginalised.”

Comparing waterfall methodology with agile, the former is the more traditional, involving a structured and sequential process where projects are split into a short number of large stages. The linear methodology steers the project forward from one stage to the next in a downward, waterfall-like manner.

This approach lends certainty at the outset, but in the last two decades has come under criticism for being too inflexible. For example, a change in product design requested at the testing stage could impact on the project as a whole.

The solution to this need for greater flexibility was the development of new techniques such as agile, which is based on a more modular approach. Project delivery is broken down into larger numbers of smaller iterations, with stages measured in weeks rather than months.

The advantage of agile is that frequent adjustments can be made throughout the project delivery without having to start the process over again. The scope for testing at each project stage can also improve the chances of a successful outcome. 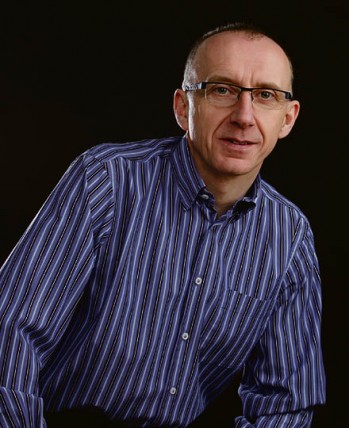 Nikos Paxos, head of programme and project management at AXELOS global best practice, says: “Where organisations want budgets, deadlines, resources, objectives and functionality detailed at the project outset, waterfall methods have served them well. But with the fast pace of business change, particularly in rapidly evolving sectors such as technology and digital, agile processes have come into their own because the iterative style is able to accommodate and support any sudden new developments that force the need for change part way through the project.”

Given that agile lends itself to a more flexible style of project management that has been proven to deliver on budget, timings and return on investment, it seems strange to learn that senior leaders, despite valuing the benefits of agile working, have some misgivings about the approach.

It is within the older traditional sectors where the challenges around agile adoption are most notable. The banking sector, for example, is a more traditional industry that has undergone radical change in the last few years, both from a technological and regulatory perspective, and organisational cultures are still struggling to adapt. In young and new innovative companies, especially in the creative and digital sectors, the people there have grown up with change.

But as the AXELOS report has shown, people are valuing working in agile ways with organisational-level culture also seeing the value. The study found that within the finance sector, the gap between the value individuals place on agile working and that at organisational level is at its smallest.

The report also found that among individual professionals, those in senior management roles were among the most enthusiastic for agile, with 83 per cent acknowledging its value.

Mr Richards says: “In the digital era, we are in an ‘on-demand’ situation; Uber being a good example of the impact disruptive innovation can have on traditional business models. The question is, as an organisation, do you respond or hope for the best? The leaders of these organisations are concerned about the potential, negative impacts of implementing ‘fragile agile’, which they believe can lead to anarchic ways of working. For this reason, they are reluctant to relinquish full control. Whereas it should be about changing culture and mindset, and having to embrace current thinking.”

Project management professionals have a role to play in reassuring organisations by making it clear that agile does not mean less control or less governance and dispelling the perceptions that agile is somehow dangerous or unorthodox.

Mr Richards adds: “The reality is that although agile is responsive and adaptive, it does not mean there is a lack of governance or it is a more dangerous way of working. Organisations need to gain a competitive edge; in today’s tough markets you have to at least stay current.”

Communication is key. Simply working in a more agile way, with small teams assembled from different parts of the organisation, may be more efficient, but failure to communicate what is going on to the senior management team is the surest way to disengage them and put the project at risk of failure. Because the stages and phases of projects using agile techniques are a little less easy to quantify, getting senior management buy-in relies on their full understanding of the process.

Whether it is a small startup developing the next generation of mobile apps or one of the major banks offering an online banking app to their customers, the digital revolution has meant businesses nowadays must be able to respond and adapt to change very quickly.

For this reason agile is no longer considered niche and is increasingly being feted by the project management profession for the flexibility and the potential it has to deliver successful projects faster. In doing so, it can play a major role in helping organisations stay ahead of their competitors.