Defining what makes a film British is tricky, but from Bond to The King’s Speech to The Inbetweeners, ours is an industry that still punches above its weight worldwide

When Colin Welland won the Best Original Screenplay Oscar for Chariots of Fire in 1982, he famously quoted Paul Revere in his acceptance speech: “The British are coming!” It could be said, though, that we often don’t know whether we’re coming or going, with a business that fluctuates between wild optimism and pessimism as gloomy as our weather.

What makes a film British is endlessly debated and analysed. Is it the talent in front of the camera and behind or simply where the money comes from? The one thing that is indisputable is proportionately the nation provides more creative brilliance and technical expertise worldwide than would be expected given the size of the country.

This is also the case in terms of audience. While the Far East is becoming an increasingly important market for American film, there is no doubt that Britain remains crucial for international box-office success.

“The British are coming!”

“The UK market is extremely important to Hollywood, with a shared language and an enduring, dominant position in terms of cinema-going driven by blockbusters and franchises,” says Angus Finney, industry guru and author of The International Film Business: A Market Guide Beyond Hollywood. “While China is on the rise, quotas and political restrictions make the UK still the next key market from a Hollywood greenlighting and revenue perspective.”

Given the strength and depth of our film crews, both technically and creatively, and our longstanding ability to handle large productions, it’s not surprising the UK is in demand

In 2014, this was evident in the success of The Hobbit: The Battle of Five Armies, which grossed a dollar for each of the 64 million people in the UK, and titles such as Dawn of The Planet of The Apes and Marvel’s Guardians of The Galaxy, the latter which qualified as a UK co-production due to being filmed in England.

Few would say that makes it a British film in a cultural sense, but it relied significantly on British technical expertise and a UK crew. It is here that our industry thrives with Hollywood productions attracted to our shores not just by tax breaks, but by the quality of people available to work behind the scenes.

“Hollywood is somewhat country-blind – it will make films wherever it makes sense,” says Dr Finney. “Given the strength and depth of our film crews, both technically and creatively, and our longstanding ability to handle large productions, it’s not surprising the UK is very busy right now and in demand.”

The other British productions or co-productions in the top 20 last year included Paddington, The Inbetweeners 2, The Imitation Game and Maleficent. Again, you could question how British the Angelina Jolie Maleficent fantasy adventure actually is, but from the perspective of UK crew and investment here, it certainly qualifies.

The frustration for people who want to make culturally British films is that the money largely flows back to the source, often the United States. This may be an old-fashioned view in terms of what constitutes a successful business, though, after all the production money is at least being spent here.

“Bond and Potter are both intrinsically British, as was Paddington Bear, but nobody complained that Paddington was a French-backed movie [co-produced by Studio Canal],” says Dr Finney. “Film is now a global, competitive market, and the UK is fighting hard to hold on to both its business activity and creative smarts, with a high degree of success to date.”

The nation’s success in terms of film craft, with the technicians who make the films and our actors who are envied worldwide, doesn’t necessarily translate to success with those who create or orchestrate the stories, though.

“On-screen talent has consistently performed well, both regarding critical acclaim and awards – The King’s Speech et al – and there are a good dozen on-screen UK players who make an impact on the numbers and ability to launch a film,” says Dr Finney. “Behind the screen is more complex. Many directors fail to get past their first film.”

Indeed, figures from the British Film Institute (BFI) reveals that, from 2002 to 2012, 80 per cent of writers and directors only achieved a single credit. Received wisdom within the UK industry is that it is often harder to make your second film than your first, especially if you haven’t made a runaway box-office hit.

It is here that organisations such as Creative England are crucial. Working with the BFI, it is a not-for-profit organisation dedicated to aiding UK film-makers, introduced after the government’s decision to close the UK Film Council.

“They are absolutely vital to this country’s ability to prime the creative pump and support emerging talent. Without development funding, training, company support and production funding, often assisted in the case of the BFI with marketing and release support, our industry would gradually become a ‘service-only’ sector. Nobody wants that,” says Dr Finney.

Then there are those who appear to work outside the system, someone like producer-director Matthew Vaughn, who secured private finance for his Colin Firth-starring spy action film Kingsman: The Secret Service. It was that rarest of beasts, a British genre movie that travelled internationally, grossing more than $400 million worldwide.

It shows that success can come from anywhere – it is, inherently, an entrepreneurial, risk-taking business. The number of films released at UK cinemas each week has doubled in the last 20 years. You can make your film, but it’s more of a challenge than ever to get the audience’s attention.

Meanwhile, as film-making becomes cheaper and the internet provides a platform for everyone, it is easier and easier to make a film, British or otherwise. “So we have the happy curse that everyone can have a go,” says Dr Finney, “But only a precious few will truly find their audience.”

There are few things more British than James Bond. The iconic spy is the star of the longest-running film franchise ever and also one of its most successful, eclipsed in box-office performance only by Star Wars and Harry Potter. 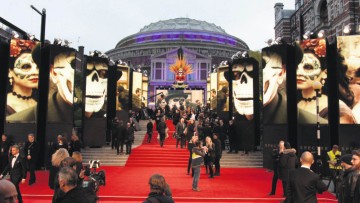 Surprising a sceptical press, Daniel Craig proved himself a perfect Bond in 2006’s Casino Royale and then, when Quantum of Solace was critically unloved, bounced back with the first billion-dollar Bond in Skyfall.

The performance of that picture was undoubtedly helped by patriotic fervour surrounding the 2012 Olympics and the Queen’s Diamond Jubilee. Skyfall became the first – so far the only – film to top £100 million at the UK box office alone, with audiences primed by Craig’s appearance beside the Queen in a short film for the Olympic opening ceremony.

Ian Fleming’s creation is perhaps the most recognisable fictional export from this country, which is perhaps ironic given that, even at the time he was created in the 1958 novel Dr No, Britain’s status as a world power was on the wane, at least in comparison to the peak of the British Empire.

And Bond’s appeal is not subsiding. While reviews haven’t been quite as ecstatic as they were for its immediate predecessor, the opening numbers for the new film are spectacular.

Spectre, the 24th film in the franchise and the second to be directed by Sam Mendes, has broken box-office records the world over in Norway, Finland, the Netherlands and, of course, Britain, where it blitzed the opening weekend record previously held by Harry Potter and The Prisoner of Azkaban, £40 million to £23 million. Audiences still want to be shaken – and stirred.