These days, residents of Austin, Texas can often be found at a futuristic trading place, a shop full of tall bins where well-known brands are nowhere to be found. In fact, the usual bags and boxes containing the products are nowhere to be found either. in:gredients, which opened its doors two years ago, eschews packaging, selling groceries in bulk to customers who bring their own bags and containers.

“Initially some people found it difficult to remember to bring containers, but people learn quickly,” says Josh Blaine, in.gredients’ manager. Apparently so, because in.gredients get frequent inquiries from would-be zero-packaging shopkeepers and earlier this year one opened in Berlin. Like in.gredients, Original Unverpackt raised its initial capital through crowdsourcing and it has gone even further than the Texas store, selling absolutely everything packaging free.

Is this the future of packaging? Given that the average European discards 159kg of packaging material each year, and that developing countries are quickly acquiring European and North American waste-generation habits, reducing the amount of plastic, paper and cardboard used to hold our purchases has become a serious matter.

Granted, recycling is increasing – most European Union member states meet the EU’s 55 per cent recycling rate – but repurposing waste consumes resources too. Euromonitor, a business intelligence firm, reports that growth in bottled water consumption has slowed as a result of consumer concerns over the bottles’ environmental cost. And in a recent report, EY notes that consumer concerns in combination with rising commodity prices have made reducing the amount of packaging a top priority.

Esben Alslund-Lanthén, a research analyst at Sustania, a Copenhagen-based sustainability think-tank, says: “Solutions that reduce or even eliminate packaging are the ones which will have the biggest impact, for sure. But we’re not going to completely eliminate packaging waste and thanks to rising raw material prices, companies are starting to think about more efficient packaging solutions.”

Indeed, zero-packaging is far from the only trend on the ascent. “A lot of the current interest in packaging innovation stems from the fact that more food is travelling greater distances and product integrity is paramount,” explains Professor Frank Dunshea, of the University of Melbourne’s master of food and packaging innovation programme. “Some of the more promising trends are re-usable and recyclable materials, temperature and environment-sensing packaging and innovative materials.”

California-based Newlight makes its AirCarbon plastic by capturing greenhouse gasses – currently methane from farms – and mixing it with biocatalysts. The result is plastic products that look and behave just like regular ones, but perform a crucial environmental function as well.

The technology isn’t new, but the cost connected with the biocatalyst had prevented greenhouse gas emission plastics from becoming commercially viable. “Our breakthrough was building a biocatalyst that was nine times more effective,” says Mark Herrema, Newlight’s chief executive.

Since introducing AirCarbon earlier this year, Newlight has been fighting to keep up with demand. And Mr Herrema sees huge growth potential. “Landfills produce very high volumes of greenhouse gas emissions, as do oil fields that flare gas,” he notes. “We could simply set up production there. It will have a big impact on carbon emissions, but we want to become a new model for carbon emissions altogether. They should be treated as a resource, not a headache.”

In addition to AirCarbon, Dell uses biodegradable foam made from mushrooms to transport its servers and has for the past several years packed some of its products in cardboard boxes made from bamboo, which replenishes itself faster than other trees.

But are all the sustainable bottles, boxes and foams missing the point? Helén Williams thinks so, at least as far as food is concerned. “For the past 20 years, we’ve been minimising packaging,” says the environmental scientist at the University of Karlstad in Sweden, who specialises in packaging innovation. “But worldwide the number of households is increasing and households are getting smaller. What we need more than less packaging is packaging in different sizes, which will help minimise waste.”

Food is indeed thrown away at an alarming rate; in some countries, up to 40 per cent. The United Nation’s Food and Agriculture Organization reports that 1.6 billion tonnes of food is wasted each year, releasing 3.3 tonnes of CO2-equivalent greenhouse gas emissions into the atmosphere.

The answer, argue Dr Williams and other analysts, is for food retailers to offer products in different sizes. Several years ago, a Swedish meat company introduced pâté in duo-packs, thus reducing the risk of it being discarded half-eaten. With the family dinner in decline worldwide, food companies are beginning to focus more on smaller food packaging sizes.

Which brings us back to Josh Blaine at in.gredients. After having started with 70 per cent packaging-free products, the store now reduced the share to 50 per cent. “It’s pretty much impossible for a neighbourhood grocery store to have zero packaging,” he concedes. Still, the inquiries keep coming. 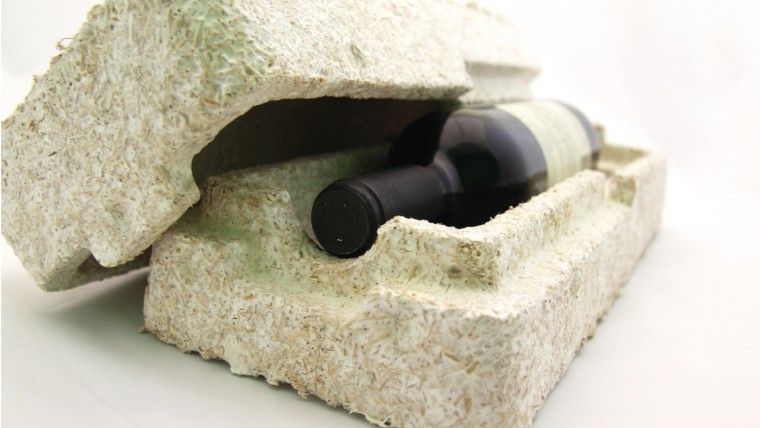 Lately the versatile mushroom has added an altogether new role to its repertoire – as a packaging ingredient.

“Everyone wants to do good things for the planet, but companies make their purchasing decisions based on cost and what best protects their product,” says Eben Bayer, chief executive and co-founder of biomaterials company Ecovative. “We offer a product that’s cost competitive and distribution competitive.”

Welcome to the new world of packaging, where sustainable can also mean competitive. Though the world’s oil supply isn’t going to end any time soon, packaging materials based on renewable raw materials also provide an attractive alternative to petrochemical-based packaging foam with brand names such as Styrofoam.

Ecovative’s packaging resembles Styrofoam and contains not just mushroom roots, but also agricultural waste. Using a pioneering process, Ecovative blends the roots with the agricultural waste, which results in a sticky mass that can be shaped into foam-like packaging shapes as well as insulation, even surfboards. The shapes are then heat-treated in special rooms to prevent the mushrooms from growing.

“We had to develop the manufacturing process ourselves,” says Mr Bayer. “Now it’s about getting production to industrial scale.” In a radical departure from traditional packaging, Ecovative’s mushroom packaging can not only be recycled, but also composted, adding nutrients to users’ gardens.

According to Esben Alslund-Lanthén of the Danish sustainability think-tank Sustainia, Ecovative’s biggest advantage is its use of agricultural by-products that can’t be used for food production. “The mushroom foam is particularly useful for protective plastics, which is primarily used to ensure that products aren’t damaged during transportation,” he says. “And the fact that the foam is biodegradable brings considerable environmental benefits because much of our packaging ends up in the oceans, nature or landfills.”

Ecovative customers include computer technology company Dell, which uses the foam for its servers, as well as furniture-maker Steelcase, the American home furnishing chain Crate & Barrel and Stanhope-Seta, a UK-based laboratory instrument firm. And according to Mr Bayer, there’s no limit to the company’s growth potential: “If IKEA called tomorrow, yes we could meet their demand. We’d just have to build another plant.”

The Swedish furniture retailer may indeed be calling to talk, not just about packaging foam. The reason? Ecovative has developed a second product, one that Mr Bayer predicts will have an even bigger impact. “We’ve discovered a way of making the glue that holds wood panels together without formaldehyde, but with the same or even better qualities than the formaldehyde-based kind,” he says. “And it’s not poisonous.”