Most companies have to offer a pension scheme in Britain today. That’s good – Britain needs to save.

Typically, you’ll look to a provider, probably one of the big life insurers, to help. They have a long history of offering company pensions and understandably boast of their expertise doing so.

If you’re in charge of pensions for your company, your provider probably took you through a range of details before asking for a signature on the dotted line.

My advice? Look again at what you signed. And if you’re lucky enough not to have committed yet, then pause. All may not be as it seems and your employees could be the ones who lose out.

One of the details discussed will be the insurer’s default fund, the place where most of your employees’ savings will be invested and hopefully grow.

There should be some differentiation and clever ideas for sure, but nothing dramatically different

These are deliberately marketed as a solid, relatively uneventful choice, suitable for most people and not needing too much maintenance on your part.

And that’s supposed to be the point; it’s called a default fund for a reason, because it should be suitable for most people’s retirement saving needs.

It also shouldn’t matter that much which insurer’s fund you pick. In theory, their default funds are supposed to aim for roughly the same thing, in a similar way.

There should be some differentiation and clever ideas for sure, but nothing dramatically different.

There are nine big pension providers in the UK, household names all of them. Here’s the problem: every single one is taking a wildly different approach to building your default fund.

Your supposedly solid choice is actually anything but. This means unless you really scrutinise all nine options in detail, you’re creating a lottery for employees relying on it for their retirement.

For evidence of this, look at what each default fund invests in. Some funds put almost all your employees’ money into the stock markets, as much as 85 per cent as shown in the graph below. 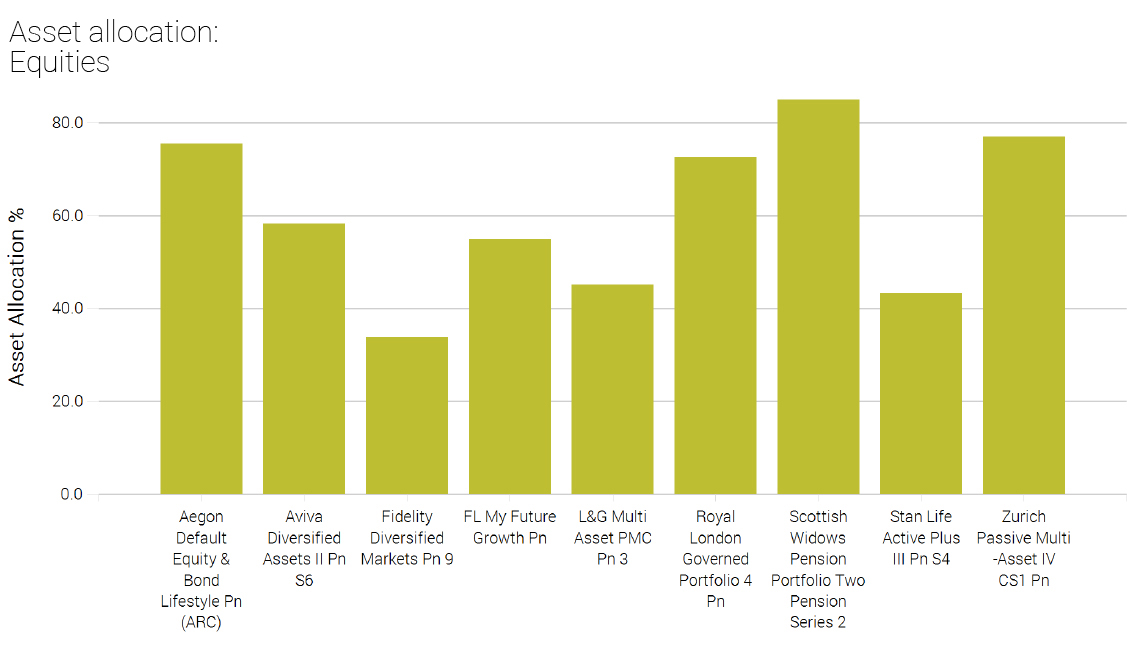 Yet others are doing the opposite, investing no more than a third in stocks or equities as they’re known.

Four of the nine invest in alternatives or more exotic investments such as hedge funds or commodities including metals. And three have opted for some kind of property investment.

As I’ve already said, some different ideas are to be expected. So why does this variety cause a problem?

The answer lies in how volatile each of these funds are; in other words, how big the swings on investment gains and losses are designed to be.

That’s related in part to how much risk each fund is willing to take, which in turn depends on the investment return they’re trying to achieve.

Again, you’d expect every default fund to have a similar level of volatility. That’s just not the case. Some funds are conservative, others are far more aggressive.

They don’t measure themselves in similar ways either; it’s a case of apples and oranges unfortunately.

Acting on the problem

The chances are you were sold your pension scheme complete with the default fund ready to invest in. Perhaps you got lucky and your provider’s fund is one of the better ones we’ve analysed.

Others, frankly, should be cursing their luck.

Even if you are in a “good” fund though, it might not be suitable for your workforce.

If your employees are all investment bankers with an understanding of stock markets and a tolerance for risk, then they are likely not to have a problem with being in one of the more volatile default funds.

If, on the other hand, you’re a business where many staff aren’t used to saving into a pension, you’re going to need the opposite – a fund that doesn’t throw up shocks or big short-term losses in people’s pension pots.

So here’s what to do. Look again at what your provider is offering. Challenge them on it and ask for the detail. And if you’re not happy, seek some expert advice on how you could change things.

It shouldn’t be this hard or this complex. Default should mean exactly that. Sadly, it doesn’t.