What is the difference between augmented and virtual reality?

While some of us are still getting to grips with this reality, designers, engineers and developers are busy building new ones. Augmented reality (AR) enhances what we see via smartglasses which overlay 3D, contextually aware graphics on to our view of the real-world environment. In other words, Google Glass isn’t dead yet.

Virtual reality (VR) completely immerses us in an alternate, 360-degree world, either live action or computer animated, using a headset that tracks head movements. Accessories include headphones, motion-tracking controllers and gloves. Aldous Huxley would run a mile if presented with an Oculus Rift headset, but for the converted, VR in 2015 is simply unlike anything else.

Dorky hardware abounds, for now, but wearing AR smartglasses is nothing like donning a VR headset. AR adds layers to the real world; VR blocks it out entirely. AR is designed to be used in public, VR in private. AR can be social. You could hold a conversation with a friend, customer or colleague while wearing AR specs, though they might get offended. VR is looking to create new social interactions in virtual spaces with Facebook and its $2-billion acquisition, Oculus VR, set to lead the charge with experiments in shared, virtual cinemas and user-created, 360-degree videos.

For anyone who was burnt by the promise of 3D, this is different. VR and AR entertainment can be genuinely jaw dropping. Play Minecraft overlaid on to your living room furniture with Microsoft’s AR helmet HoloLens, which lets you pin and walk around “holographic” objects. Or try virtual space tourism by marvelling at high-resolution, 360-degree images of Mars on a Samsung Gear VR.

At CCP Games’ annual EVE Fanfest in Reykjavik, teaser gameplay for its slick, multiplayer VR space game EVE: Valkyrie, due in 2016, was met with rapturous applause and calls for an encore. VR now has its own film festival, Kaleidoscope, which is touring ten cities in the United States, and headsets have been used to allow British Museum visitors to explore a Bronze Age roundhouse and in David Attenborough’s First Life show at the Natural History Museum. Charities and journalists are testing VR’s abilities as an “empathy machine” with guerrilla broadcasts of protests and appeals from disaster zones. It’s extremely accessible. 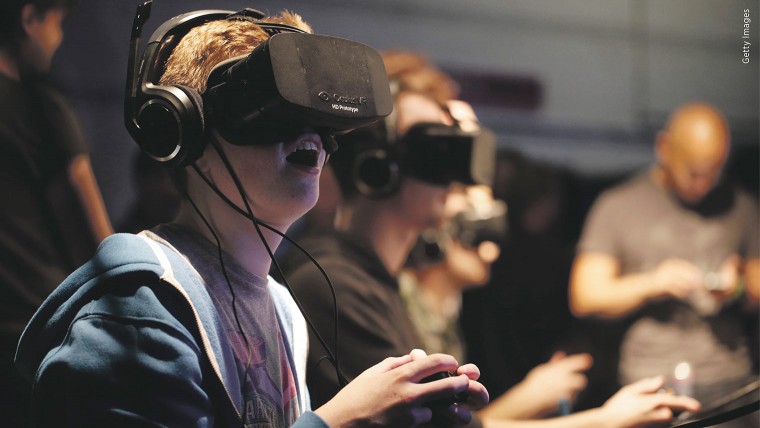 “VR is about escaping the real world and going someplace you couldn’t normally go,” says Jeffrey Gattis, HTC’s executive director of marketing for connected products, a category which includes the HTC Vive headset, a collaboration with games developer Valve and widely regarded as the best all-round experience so far. “Games, movies, even sporting events and travel are perfectly suited to the medium, but it will be important that we continue to see growth in the number of developers creating VR content.”

Virtual reality has the momentum, but there’s still potential for AR to be used in gaming, communication and productivity. If there’s one company to watch, it’s Magic Leap, a secretive startup that has released a handful of demo videos since receiving big investment from Google. It’s unlikely we will walk down the street wearing smartglasses until AR is integrated seamlessly into our Ray-Bans. Yet this is only a matter of time considering both Google and Intel have agreed long-term partnerships with Ray-Ban and Oakley maker Luxottica. Intel also owns Recon Instruments which makes sports smartglasses and ski goggles displaying fitness and sports stats.

AR adds layers to the real world; VR blocks it out entirely. AR is designed to be used in public, VR in private. AR can be social; VR is looking to create new social interactions in virtual spaces

The more specific the wearable, the more useful it can be and AR eyewear that respects this will make big inroads in business applications. Google knows it and has quietly released a new version of Glass for business, tailored to each customer. “For AR it’s more of an enterprise opportunity so the devices will sell in much lower volumes, but at a significantly higher average selling price than VR headsets,” says Ben Wood, chief of research at CCS Insight, which forecasts sales of 24 million AR and VR devices by 2018.

AR and VR wearables could replace textbooks for medical students as both have been trialled in anatomy training at American universities. VR, too, could be the future of teleconferencing – shaking hands in virtual space is not beyond the capabilities of today’s technology.

Even HoloLens, which will be used by Nasa astronauts aboard the International Space Station, could make waves in industries such as assisted retail. “We are pursuing HoloLens because we have a background in business applications, not games,” says Raven Zachary, co-founder of HoloLens software company Object Theory. “AR seems the longer term, transformational technology, with VR more of a niche. Then again, as they blur we may not think of them as two distinct technologies in the future.”

AR for business, VR for leisure is a simplistic prediction, but it’s a pattern we’ll see play out in the next five years. To enhance this world or spend time in new, artificial worlds? That’s the question facing the biggest companies on the planet and it’s a question more of us will find ourselves considering.