With any new project, there are unknowns. Scope, schedule, priorities, budget, resources and market demand are just a few of the variables that might necessitate course corrections, stall a project or shelve it entirely.

We know, though, that the success of all projects, large or small, in a stable or volatile environment, depends on the presence and engagement of good leaders. One leader who should be an anchor in the swirling sea of uncertainties is the executive sponsor. As a visible “champion” of the project’s business value, the ideal sponsor maintains a vested interest in the success of the project from initial planning to final delivery.

Effective executive sponsors have thorough knowledge of the project and how it connects to the organisation’s strategy. They have the skills and authority to clear roadblocks, the confidence to make quick decisions and the influence to champion the initiative with senior management to keep the project among the organisation’s top priorities. They are also essential in motivating and engaging the project team. 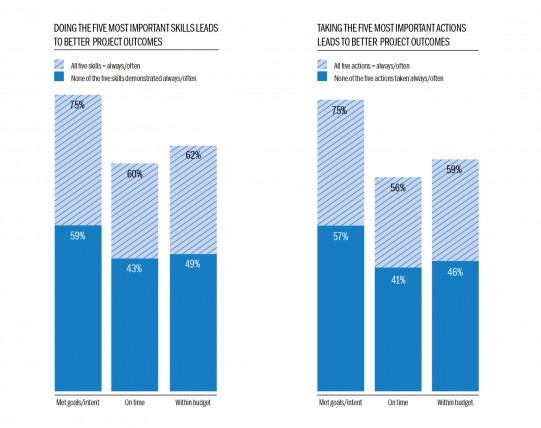 According to Project Management Institute’s 2015 Pulse of the Profession® Study, actively engaged sponsors are by far the top drivers of projects meeting their original goals and business intent. Even so, organisations report that only 62 per cent of projects have actively engaged executive sponsors. Those that do are completed more successfully.

When an organisation has active, engaged executive sponsors on more than 80 per cent of its projects:

As the number-one driver of project success, sponsors can have a big impact on a company’s bottom line. For every £1 billion spent on UK projects and programmes, £126 million is wasted due to poor project performance. One in three unsuccessful projects fail to meet goals due to poorly engaged executive sponsors.

Even when projects have executive sponsors, organisations can struggle to use them effectively. PMI’s Pulse of the Profession® In-Depth Report: Executive Sponsor Engagement – Top Driver of Project and Program Success shows that most are overextended, watching over an average of 2.6 projects and spending almost 34 hours a week on that activity alone, never mind their day job. When sponsors are overextended, decisions get delayed, roadblocks continue and schedules slip. Research also shows that most executive sponsors feel unprepared for the role and would benefit from additional training, particularly in order to avoid getting stuck in the weeds.

The most successful executive sponsors should spend their time looking up, not down, though understanding what the project managers do is as important as letting them do it. One survey respondent put it this way: “To be a really good executive sponsor requires two sets of skills that are not always packaged in one person. You have to have the ability to micromanage, but not the tendency to micromanage.” Not easy for anyone in the executive suite.

When it comes to executive sponsorship, a few simple steps can help pave the way for success.

The importance of the sponsor’s role in projects must be embedded in organisation culture. Emphasis on awareness, alignment and accountability with regard to projects creates and reinforces a culture that allows for active executive sponsor engagement. The relationship between the sponsor and project and programme managers must be one founded on transparency and trust, with a high degree of interdependence. To accomplish this it’s necessary to cultivate a project environment that is conducive to open communication and co-operation between teams and departments. Such a culture also regards executive sponsors as a critical project resource and recognises the value they add. When executive sponsors are viewed in this way, organisations are less likely to overburden them, more likely to provide needed training, and more likely to prioritise and be strategic in assigning executive sponsors on projects and programmes.

In what might be called the “art” of executive sponsorship, it is the human side of the equation that requires the subtle skills of persuasion and social dexterity. Maintaining a productive, ongoing dialogue between stakeholders throughout the project life cycle smoothes the road for better execution of subsequent tasks by team members. A successful project sponsor’s solid communication skills serve as the basis for other vital person-to-person functions. He or she must possess the ability to lead and influence stakeholders, whether or not they are direct reports, resolve conflicts of interest or personality, rectify competing project objectives, and work across departments to find win-win solutions.

Communication between the sponsor and the project manager should be a two-way conversation. Regular feedback and progress reports calibrated to the appropriate level of detail for the sponsor help produce better project and programme outcomes by allowing the sponsor to communicate effectively.  Too often, such communication is either non-existent or is heavy on quantity, but lacking in quality. Research finds a disconnect within organisations; while 92 per cent of executive sponsors report they communicate effectively, only 47 per cent of project managers agree. Creating a roadmap that identifies a few critical milestones, identifies a schedule of regular updates and reports progress against identified outcomes provides useful insight to sponsors. Simple, business-oriented reporting helps executive sponsors stay engaged without getting involved in specific project details.

PMI’s research shows and every project manager who has ever had a bad executive sponsor knows that having project or programme management knowledge or even previous experience as a practising project manager is not sufficient preparation for being a sponsor. Additional skills, training and experience are needed. On-the-job learning, self-study and “coming up through the ranks” from project or programme management show no impact on improved project outcomes. Better project outcomes are achieved from external training, internal training including from the organisation’s project management office, or mentoring from other executive sponsors within the organisation.

To engage executive sponsors more effectively, organisations need to re-evaluate project sponsors in leadership roles and place priority on critical competencies, such as rallying support of senior management, intervention on escalated issues, removal of roadblocks, and management of stakeholders, resources and budgets. In doing so organisations can begin to bridge the communication gap between influencers and implementers, to increase engagement significantly, boost project success rates and reduce risk.