A rise in the number of road fatalities in the UK, coupled with fears of a worsening outlook for the country’s eye health has prompted fears that motorists’ poor vision is putting lives at risk.

Figures released by the Department for Transport revealed a 3 per cent increase in road deaths between 2014 and 2015, taking the total to 1,780. Worryingly, the figures come as experts point to a bleak outlook for the nation’s vision due to the UK’s ageing population and an over-stretched NHS.

James White, head of brand marketing at Vision Express, says: “With a growing number of licences being revoked with concerns about standards of vision, it’s never been more important to know that your sight is up to scratch before getting behind the wheel.”

While it is recommended adults have an eye test at least every two years, research by sight loss charity the Royal National Institute of Blind People revealed that nearly half of all adults aged 34 or under fail to do so.

In a bid to make the UK’s roads safer, national optician Vision Express and insurance giant Aviva have joined forces to offer consumers a free eye test. Individuals can download a voucher via the insurer’s MyAviva system, which can be redeemed at any of the 390-plus Vision Express stores across the UK.

The offer is available to Aviva customers and non-customers alike when they register for free with MyAviva, which can be accessed online or through an app.

Mr White says: “A sight test is recommended at least every two years, yet only around half of adults visit an optician every five years, with 8 per cent never having had a sight test. That is around four million people in the UK. Alarmingly, many of these will get behind the wheel on a regular basis.”

The duo hope their offer will help raise awareness around the need for regular eye tests as part of an overall health check, particularly for those taking to the roads.

“Many people just assume their vision is fine and therefore don’t think they require a visit to the optician, but without a thorough eye test it’s impossible to be sure,” says Mr White.

“Around 50 per cent of sight loss is preventable, and a simple trip to your optician can protect your vision and your licence, making the roads safer for everyone. Ultimately, eye tests save lives.”

For many people, the only mandatory vision check is when they are asked to read a registration plate 20 metres away as part of their driving test and the majority of drivers do so under the age of 20. Changes in eyesight are gradual and shockingly it’s possible to lose up to 40 per cent before noticing.

According to the RAC, road accidents caused by impaired vision are estimated to result in 2,900 casualties every year in the UK and cost a staggering £33 million.

GP, writer and broadcaster Dr Sarah Jarvis is a passionate campaigner for driver health, including conditions such as diabetes and stroke, which can be detected via an eye test.

She advises: “When you’re driving, speed and reactions are enormously important. If your eyes aren’t all they should be, it may take you a few seconds longer to recognise what’s going on and then to respond – and those seconds could be crucial. We know our eyesight tends to deteriorate with age and age-related deterioration in sight can have a huge impact on your ability to drive safely.”

Vision Express and Aviva believe their national initiative will highlight the importance of sight in keeping motorists safe, as well as help to safeguard their licences.

The death of teenager Cassie McCord in 2011 at the hands of 87-year-old Colin Horsfall, who lost control of his car three days after failing an eye test, has led to new powers being introduced to revoke licences for failing roadside eye checks. Cassie’s Law, which came into force in 2013, allows police officers to request urgent revocation of licences through the DVLA if they believe other road users are put at risk.

A freedom of information request revealed that 9,034 licences were revoked from car and motorcycle drivers in 2015 as a result of vision. With the introduction of Cassie’s Law placing emphasis on concerns for drivers’ eyesight, there has never been a better time to take advantage of a free eye test.

Pete Markey, brand and marketing communications director for Aviva, says: “We are on a mission to make the UK’s roads safer and have carried out a great amount of research around safer driving. Given the weight of evidence about the impact of sight on fitness to drive, our collaboration with Vision Express will provide a real, much-needed benefit to motorists.”

Mr Markey says research shows that a significant 37 per cent of people will put off having an eye test due to concern about the cost.

“We really hope people will take advantage of the free test and together we can put eye health at the top of the drive safer agenda. The sooner eye conditions are detected, the more likely it is that sight can be saved, so ultimately we hope this collaboration can lead to safer roads for everyone,” he says.

The collaboration with Vision Express underpins Aviva’s Drive Safer campaign, launched in 2015, which encourages drivers to check how safely they drive through the Aviva Drive app, based on acceleration, braking and cornering over 200 miles. Users of the app are given an individual score out of ten and drivers may then be able to use their score to achieve discounts on their Aviva car insurance. 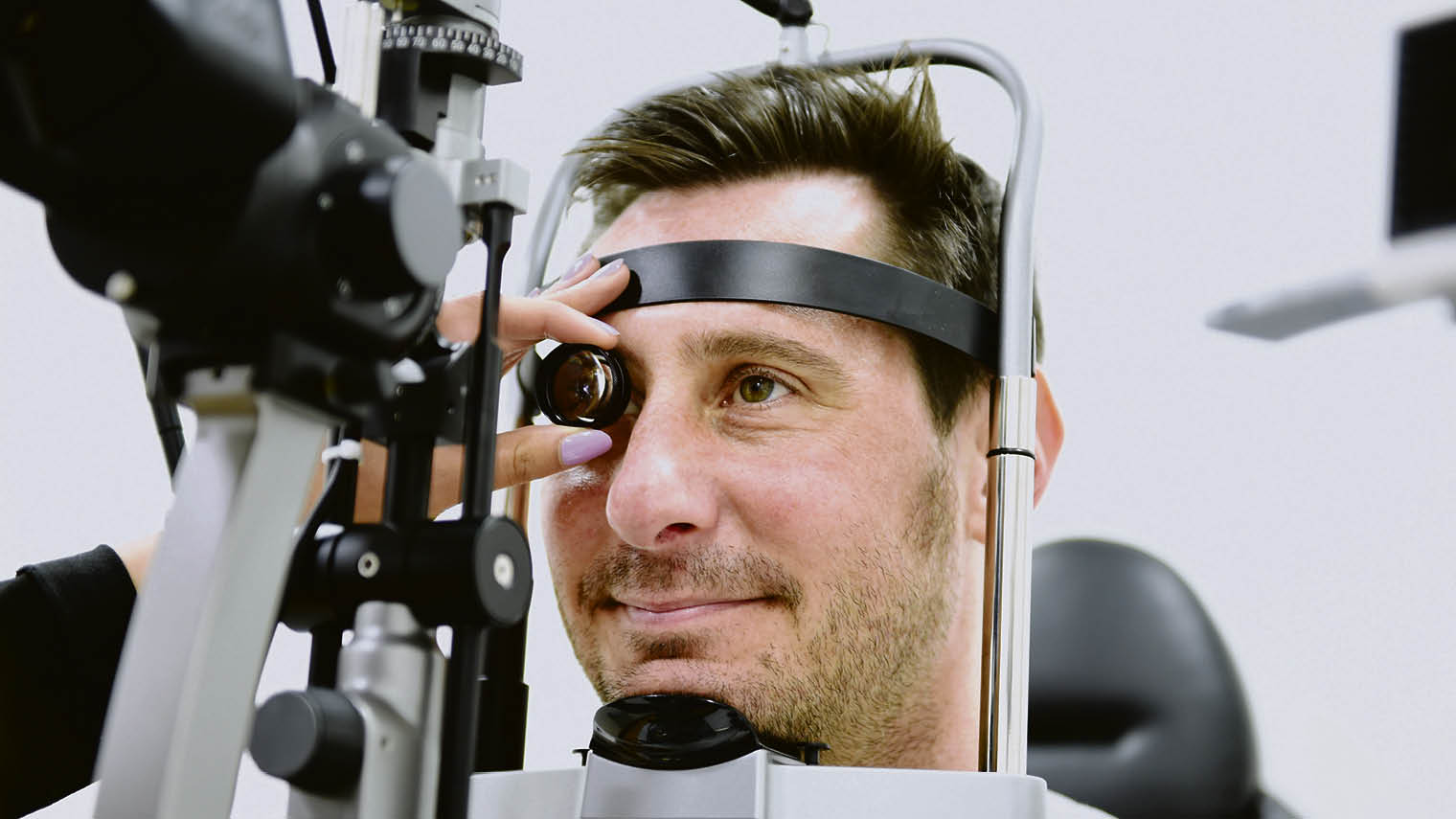 Colin Davenport, a 73-year-old classic car enthusiast from Tring in Hertfordshire, knows all too well the importance of an eye test, after a life-threatening mini stroke was diagnosed following a routine eye check at Vision Express, Aylesbury.

A customer at the Vision Express branch for more than a decade, Colin made an appointment to see optometrist Trudi Ognjenovic for an eye examination after losing sight in his right eye for around a minute.

“In essence, I was told that I’d had a mini stroke and that without treatment I had a 20 per cent chance of having another stroke within the month,” he says.

Following a thorough examination and consultation, Trudi ruled out other possible triggers, identifying risk of stroke as a critical concern. She made an urgent referral to both Colin’s GP and Stoke Mandeville Hospital. Colin’s decision to seek an eye test and Trudi’s swift action resulted in him being seen by a stroke specialist, who confirmed that the arteries supplying blood to Colin’s brain were 80 per cent blocked, causing a transient ischaemic attack.

“I’m a keen motorist and being able to take my 1954 MG out for a drive is so important to me. The prospect of having a condition that would mean I couldn’t get behind the wheel was awful,” Colin says.

Fortunately for him, within less than two weeks of his eye test, a procedure called carotid endarterectomy was carried out to remove the deposits in one of Colin’s arteries and improve blood flow to his brain. He has now fully recovered and is able to indulge in his beloved hobby.

“I had no idea an eye test could pick up a possible stroke. I didn’t think my symptoms were quite so serious, but once identified, the speed at which I received treatment was incredible,” he says.

Colin now enjoys journeying across Europe in his white MG, with trips including the Stelvio Pass, dubbed the world’s greatest road, and is calling on other drivers to keep their health in check with regular eye tests.

Trudi says: “I was conscious of not wishing to scare Colin, but the symptoms he was presenting, paired with no pain or migraine, indicated to me that stroke was a real concern.

“Many people don’t realise the breadth of health conditions we can identify with a thorough eye test, which is why it is so important to have a routine exam at least every two years and to see an optometrist straight away if you experience any visual disturbances.”