President Donald Trump took the world by surprise when he responded to Syrian President Bashar al-Assad’s chemical attack on his own citizens. But has his unexpected move ended any prospect of a new friendship with Russia? 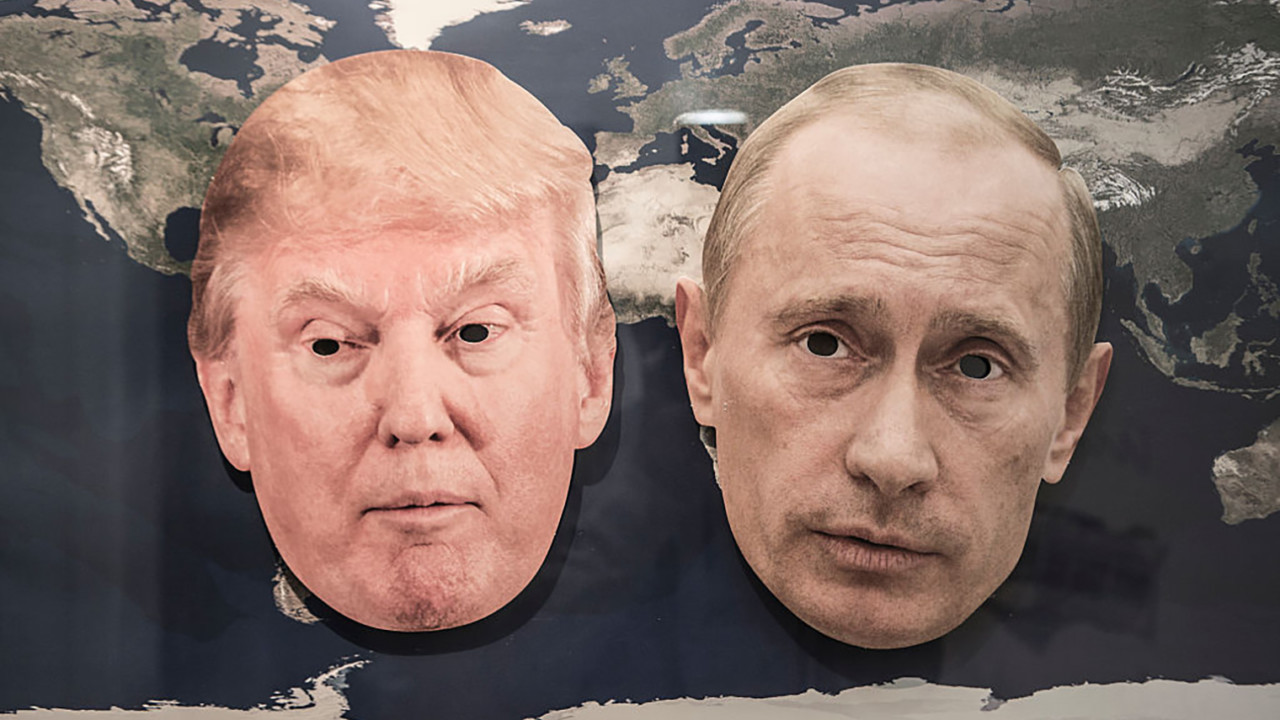 If there’s one thing about President Donald Trump we should have predicted, it’s his unpredictability.

As America’s first commander-in-tweet, Trump’s often-contradictory outbursts on weighty matters of state, ranging from his thoughts on the Supreme Court to Snoop Dogg, have confused even his staunchest supporters.

But Trump used a more conventional platform – a speech during his election campaign in April last year – to announce his unpredictable intent in the field of foreign policy.

And so it came to pass. When the new President authorised the showering of 59 Tomahawk missiles on Shayrat Airfield in Syria on 7 April, in response to a chemical attack by President Bashar al-Assad’s troops on civilians in the town of Khan Sheikhoun, it took most observers by surprise. It marked a U-turn from White House statements about Syria only a week earlier, and during his campaign, Trump had said attacking Assad’s regime “could lead to World War Three”.

Russia – which not only backs Assad’s government in Syria, but has troops on the ground there, including, it is believed, at the Shayrat airbase itself – was notified of the attack in advance. But the collateral damage from the strike may have been to end the developing relationship between Trump and Russian President Vladimir Putin.

Trump’s positive view of Putin first came to very public attention back in 2007 in a CNN interview when he revealed to Larry King: “Look at Putin – what he’s doing with Russia…whether you like him or don’t like him – he’s doing a great job in rebuilding the image of Russia and also rebuilding Russia period.”

But his admiration for the Russian leader is clearly not just economic, but personal. When Trump took his Miss Universe pageant to Moscow in 2013, he tweeted a speculative invitation to Putin: ‘Will he become my new best friend?’

Shortly after launching his Presidential campaign in 2015, Trump predicted: “I think I’d get along very well with Vladimir Putin. I just think so.”

While the two leaders each have political incentives for friendship, they also share a mutual interest in macho posturing.  According to Dr Kevork Oskanian, of Birmingham University’s Centre for Russian European and Eurasian Studies: “Putin built his reputation in Russia in the early 2000s on restructuring the state and rebalancing the economy but [more recently] it has been built on restoring Russia’s status as a great power.”

“He exudes this image of a strong leader, of Russian masculinity, and showing his strength as a leader has played very well in Russia. You also have that in Trump – he portrays himself as a strong decisive leader.”

Trump was lionised in the Russian state-controlled media during his election campaign. According to Russian journalist Giorgi Lomsadze, writing in Coda Story, there was a sense of jubilation in Russian media coverage of his victory.

The fervently pro-Putin host of Russia’s flagship news show, Dmitry Kiselyov, had consistently rooted for Trump in the Presidential race, while condemning Western “media lies” against his campaign, and hailing the new US President as ‘muzhik’ – a ‘real man’.

Some Western observers believe the Russian leader may simply see Trump as a ‘useful idiot’. From Putin’s perspective, a rapprochement with the United States brings the prospect of Russia consolidating its gains in Syria, and Ukraine, boosting the Russian leader’s nationalist strong-man image – a welcome distraction from a deepening economic crisis at home. It also offers hope of a new ‘multi-polar’ world order, in which Russia could re-assert itself within a greater sphere of influence.

According to Dr Nicholas Kitchen of the LSE United States Centre, Putin’s backing for Trump was borne out of a hope that he would adopt a lighter touch in world affairs: “In supporting Trump, Russia wanted a more limited American foreign policy – an America that said ‘you know what, we don’t go round lecturing people – that’s not in our interests and we are now more focussed on the United States’.

Trump’s own reasons for a new relationship with Russia are, like his barely-literate tweets, much harder to read. His grand plan is to fight with Russia in defeating ISIS. But the prospect of military intelligence-sharing with the old enemy horrified many on both sides in Congress. His own Defence Secretary, Jim Mattis, also poured cold water on the idea last month, saying the US “right now is not in a position to collaborate militarily with Russia.”

Meanwhile the international media continues to uncover more business links between Trump associates and Russian oligarchs. And far more politically-explosive motives for the relationship may well emerge from the ongoing FBI investigations into links between the President and Russian interference in the election.

These suspicions were further fueled by the new US President brushing aside the many complaints against Putin voiced by the Obama administration, not least the Russian leader’s support for Assad, his de-facto annexation of Crimea from neighbouring Ukraine, and his assassinations of political opponents and critical journalists.

The Trump administration’s putative friendship with Russia, combined with his more laissez-faire attitude to Assad, may have convinced the Syrian leader that he now had a free hand to terrorise the enemies within his borders.

It took the deadly attack on Khan Sheikhoun on 4 April for Trump to change his stance on Assad, and take action which risked renewing America’s conflict with its new Russian friend.

Trump was clearly moved and angered by the harrowing footage of children, choking and dying in their parents’ arms. According to the UK-based monitoring group, Syrian Observatory for Human Rights, 72 people including 20 children were killed.  The victims had suffered horrific symptoms consistent with the nerve agent, sarin.

Assad denied any chemical attack, claiming the whole account, including the footage, was faked. Russia acknowledged that Syrian planes did attack Khan Sheikhoun but said the aircraft struck a chemical weapons depot, used by militants in Iraq.

Trump’s explanation of the missile strike against the Syrian regime’s airfield, was that it was in the national security interest of the US to deter the use of deadly chemical weapons, adding: “Years of previous attempts at changing Assad’s behaviour have all failed and failed very dramatically.”

Until that moment, the President’s proclaimed foreign policy slogan of ‘America First’ had been taken to signal a withdrawal from its role as global policeman.

Indeed, only the week before, US Secretary of State Rex Tillerson and UN Ambassador Nikki Haley had both played down any likely involvement in Syria, seemingly abandoning the long-held US objective of persuading Assad to quit, as a step towards ending the six-year civil war.

Tillerson said it was up to the Syrian people to determine Assad’s future, while Haley said: “Our priority is no longer to sit there and focus on getting Assad out.”

They were backed the following day by White House spokesman Sean Spicer, who explained: “With respect to Assad, there is a political reality that we have to accept in terms of where we are right now. The United States has profound priorities in Syria and Iraq, and we’ve made it clear that counterterrorism, particularly the defeat of ISIS, is foremost among those priorities.”

It is this revision of American policy towards Assad, critics say, which may have emboldened the Syrian leader to mount the chemical attack.

“The close proximity of Haley and Tillerson’s comments may have given Assad the assurance that he could do this,” said Linda Robinson, a senior international policy analyst at RAND Corporation in an interview with the New York Times.

More unpredictable moves may be to come from Team Trump

Republican Senator Marco Rubio also accused Secretary of State Rex Tillerson of “in essence, almost nodding to the idea that Assad was going to get to stay in some capacity.” He added: “I don’t think it’s a coincidence that a few days later we see this [chemical attack].”

Trump’s strong-man image at home dictated that he had to be seen to act in response to Assad’s barbaric attack and its heart-rending results. He most likely saw the US missile attack as a one-off punishment for crossing the red line of using chemical weapons, rather than as a precursor to planned strategic action. Few observers believe it will be followed up by any direct attempt at regime change.

But when Trump’s military advisers put a targeted strike with Tomahawk missiles on the menu of possible responses, he may have realised it could serve a second useful purpose, by providing a dramatic rebuttal to suggestions that he is in Putin’s pocket. Certainly, it brought respite from intensifying media scrutiny on his presidential campaign’s links to Russia, and suggestions that members of the Trump team had secretly assured Russia that Barack Obama’s sanctions against the nation for interfering in the presidential election would soon be reversed.

Dr Kitchen explains: “I wouldn’t have expected the military advisers to have pointed that out.  But I think he might either have worked that out for himself, or other domestic political advisers may have pointed to that too.”

The future for the US-Russia relationship after the American attack on a key Russian ally is, like Trump himself, hard to predict. Many observers believe that outwardly, Putin is feigning anger at the move but will be patient, recognising Trump’s current difficulty in moving towards a closer relationship in view of the scrutiny he is under at home.

Dr Kitchen says: “I think publicly, Russia has to say it’s not OK for the United States to be judge jury and executioner. But the US is not showing any particular inclination to escalate its involvement in the Syrian civil war, and I think the Russians will move on from this.”

The Trump administration has moved back towards continuity with Obama’s stance on Russia. Trump now recognises NATO as vital, and Secretary of State Tillerson has made clear that any suggestion of a deal with Russia over Ukraine, recognising Crimea as part of Russia, is off the table.

But more unpredictable moves may be to come from Team Trump. The President has so far shown a reactive, unpredictable approach to foreign affairs, rather than any coherent strategy. That may not be helped by his cabinet being predominantly populated by military figures who lack policy experience, and Secretary of State Tillerson, an oil industry executive, seemingly excluded from Trump’s inner circle.

Dr Kitchen explains: “The most sophisticated policy people are from a military background and with the State Department largely sidelined, the only competent people around foreign policy making, who are going to seem most convincing when it comes to briefing the President, are the military guys. It’s not necessarily that they are bad people, or necessarily hawkish, but Trump lacks a balance of voices.

“His approach seems to be ‘something happens, I need to respond, I have military advisers which present me with a military solution and I pick the thing that looks hardest’.

“I think the Russians will see this as profoundly de-stabilising and worrying, that they cannot predict the behaviour of this administration and that if there’s a military option to be taken, Trump is likely to take it.”

However, all these considerations could come to nothing if the FBI’s investigations into Team Trump’s links with Russia produces explosive evidence.

“That is going to be the thing that will hang over US-Russian relations,” says Dr Kitchen. “Any kind of engagement, be it over Ukraine, or be it over Syria, where US and Russian interests come up will be seen through the prism of those ongoing investigations, at least until we get some kind of outcome from them.”

Trump’s first 100 days in office have been tumultuous, dramatic, even chaotic. If the coming months produce damning evidence of secret conspiracies with Russia which cannot simply be denied as ‘fake news’, Trump will surely enter a crisis of historic proportions.