Though workplace pensions may seem an unlikely place for a revolution, the truth is it is experiencing a level of social engineering unprecedented since the introduction of the state pension in 1909.

The reason is simple; the UK’s population is ageing – and fast. In the last 100 years, life expectancy at birth has almost doubled and, with falling birth rates, we no longer have enough people in the working population to support our current – or future – pensions bill.

We have, therefore, as a nation, returned some of the responsibility for providing retirement income back to the individual. While the emphasis may be upon individuals taking more responsibility, this remains a live issue for business owners.

In 2012, only 2.5 million UK citizens saved into a pension scheme, compared with 5.5 million in 2000, according to the International Longevity Centre’s 2014 report on demographic change.

Since October 2012, when auto-enrolment into pension schemes began, pensions saving has been extended to almost five million workers in the UK who were not saving before – but contributions are far too low. 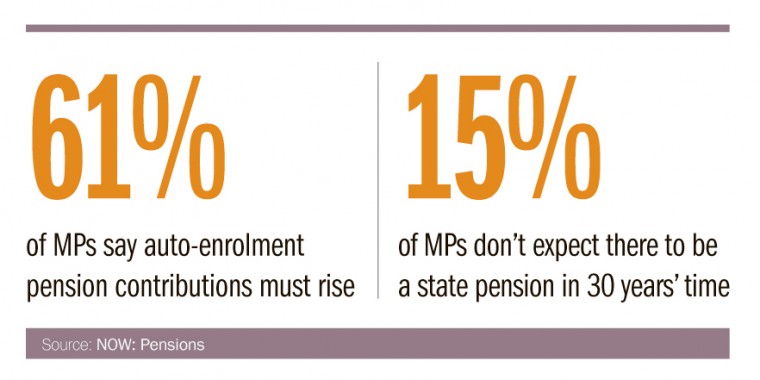 Under auto-enrolment, pension provision is no longer optional – you can’t avoid it and if you have so far, you won’t for much longer. Since October, businesses with fewer than 40 employees have begun to implement or “stage” their auto-enrolment provision and this process continues until all employers have staged by the end of 2017.

Once staged, and costs are considerable during this period, this is not the end of the matter, simply the beginning. At first, an employee will only see a minimum of 0.8 per cent of their earnings going to their workplace pension. Their employer will be obliged to add a contribution that is the equivalent of 1 per cent of the worker’s earnings. Tax relief adds another 0.2 per cent.

However, minimum contributions to auto-enrolment increase to 5 per cent in 2017 and 8 per cent in 2018, with the employer’s rate increasing by 2 and 3 per cent on each occasion. The prudent man principle would suggest plan for a worst-case scenario and that would mean viewing this as the thin end of the wedge.

Even the government acknowledges these higher levels of saving are too low to deliver meaningful retirement income. The latest data from the Office for National Statistics shows that, before auto-enrolment, fewer than 3 per cent of workers paid the minimum contribution into their workplace pension. That figure is now up to 12 per cent. This is the uphill struggle faced in engaging an indifferent population.

If government is set on increasing workplace saving – and both main parties most definitely are –then employers can expect to see a greater burden placed upon them.

The impact on business from auto-enrolment is one thing, but that concerns putting in the money. The so-called “freedom and choice” offered by chancellor George Osborne in his March Budget is set to cause further complications.

The freedom to take your pension as cash is one thing, but employers will have to determine how employees do that. Some schemes, particularly defined benefit (DB), will insist the whole fund is transferred into a defined contribution (DC) plan by a regulated independent adviser.

Since October 2012, pensions saving has been extended to almost five million workers in the UK who were not saving before – but contributions are far too low

Others may allow members to take out cash as and when they want to. But running a pension scheme is already an arduous task, without running a bank account for employees as well.

Throughout this, employers must satisfy the guidance guarantee – another piece of Budget legislation – offering impartial information to members to help them make an informed choice.

Though the Pensions Advisory Service and the Citizens Advice Bureau will provide the bedrock of the guarantee, there is still much work to do inside the business.

It was only necessary to communicate with a DB plan member before joining, on joining and at certain major life events. However, DC pension funds are money that belongs to individual workers, and as a result the reporting and communication requirements are far more stringent.

Determining what you must tell employees, how much detail is required and when you do it is going to be a difficult task, and must be reviewed regularly. That will cost money, whether conducted by in-house experts, such as human resources and pension teams, or an external adviser.

The guidance guarantee gets most difficult at the point of retirement. How this has been addressed in the past is currently under review in case any consumers – for this is what employees are in the eyes of the law – have suffered any detriment. The biggest worry is that the guidance guarantee must be in place by April 2015, yet the rules have yet to be published.

Although the chancellor didn’t revisit pensions in his autumn statement earlier this month, we should anticipate continued change whatever the outcome of the general election in May.

New research by auto enrolment provider NOW: Pensions shows that 54 per cent of MPs believe the state pension age will have risen to 70 by 2044. Meanwhile, 83 per cent of Labour MPs believe the Budget reforms will result in a greater proportion of people relying solely on the state pension, placing greater emphasis on the future of workplace saving.

However, as 61 per cent of all MPs believe auto-enrolment contributions need to be increased and 15 per cent believe the state pension won’t even exist in 30 years’ time, this change is likely to come sooner rather than later.

Labour has committed to the introduction of a permanent commission to oversee future pensions legislation. While this may take the political sting out of the tail, it is unlikely to deliver a less burdensome system.

The Conservatives would like further flexibility for savers, but are hamstrung by the effects of the recession. If the economy improves, it is likely a Conservative government would accelerate the pace of regulation to assist the financial services industry develop newer, more flexible retirement products.

One thing that remains constant in this restructuring of workplace pensions is the role of business. Provision is compulsory – until further notice – but the potential costs have no ceiling and organisations, particularly those for whom this is a very new experience, should look to the longer term when planning how they will comply.