The state of the eurozone and Europe’s faltering economic recovery are of central importance to the UK’s revival, writes Pádraig Floyd

Over the past year, the UK has been engaged in a game of rhetorical hokey cokey. Whether focused on unions with Scotland or Europe, the in-out debate has shaken up the political landscape.

Whatever the result of the coming general election – and the degree of separation or renegotiation that happens as a result – the UK is, however reluctantly, a member of the EU and must be concerned about its economic performance.

The green shoots of recovery seen in Europe faltered earlier this year and for some died back after the summer. There were exceptions – Spain saw rapid growth, as did Portugal and the Netherlands. These were, however, small increases and in the case of Spain and Portugal from a very low base.

Growth had stalled in France, the second largest economy, but it was the falls in Italy and particularly Germany that has led to sleepless nights.

The word on everyone’s lips is deflation, an economic state far worse than the term suggests.

Deflation is a difficult cycle to break once caught up in it and has dominated the Japanese economy for more than two decades.

Deflation is a concern because the eurozone’s rate of inflation is so low. Though it had increased by a third at the end of October, it is still only 0.4 per cent, a fifth of the European Central Bank (ECB) long-term target of close to 2 per cent.

This has worrying repercussions because the region’s governments are saddled with huge amounts of debt, which becomes more expensive to service in a low-inflation environment.

In an attempt to stimulate the eurozone economy, the ECB introduced financial instruments to purchase assets and jump-start bank lending, but to little effect.

Mario Draghi, the ECB’s president, will be under pressure to follow through on his promise to do “whatever it takes” to support the euro and stimulate economic growth, which may result in a period of quantitative easing (QE). This policy, undertaken in both the UK and US since the financial crisis, would see the ECB buy sovereign bonds of euro economies.

QE may be on the cards, says Patrick Gordon, head of research at Killik & Co, but he remains sceptical it will happen any time soon. Political resistance and a desire on the part of the ECB to assess the efficacy of their existing policies are likely to postpone the start of QE. 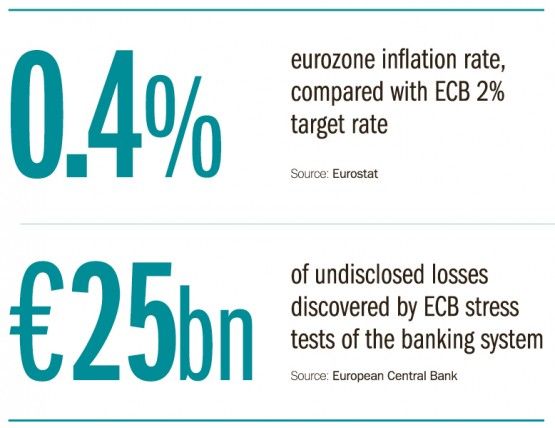 “If one of the objectives of QE is to reduce government bond yields, then the expectation of QE has probably already achieved this, thereby reducing the need for actual QE,” says Mr Gordon and so the currency may be the main component of the argument.

The US Federal Reserve and Bank of England are looking to raise rates, while the ECB and the Bank of Japan, which has extended its QE programme, remain accommodating.

As central bank policies diverge, the euro is likely to remain under pressure, though this would be positive for growth and for increasing inflation.

“However,” adds Mr Gordon, “any relative strengthening of the euro would be an unhelpful development for the eurozone, which could add a sense of urgency to the QE debate.”

The banking sector, architects of the crisis, remain crucial to the region’s recovery. The ECB’s policy to stimulate lending is considered essential to generating growth, but confidence is also a major concern.

The recent stress tests undertaken by the ECB to understand the true state of the banks were received with mixed reviews. Some argued the data was already a year out of date and therefore unrepresentative, while others called for a tightening of controls.

ECB president Mario Draghi will be under pressure to support the euro and stimulate economic growth, which may result in a period of quantitative easing

“The stress tests have been hanging over Europe for well over a year now, but in the end the result was not far from expectations,” says Hetal Mehta, senior European economist at Legal & General Investment Management. “We see this outcome as allowing deleveraging to continue to slow rather than marking a major turning point.”

However, Chris Beauchamp, market analyst at IG, says the tests exposed weaknesses in both the process and the European Banking Authority. “A fresh round of tests, much harsher than the last, is needed to really get confidence back in the sector and spark a round of consolidations that will see the weak banks swallowed up or go to the wall,” he says.

SO FAR, NO GOOD

Ross Barr, economic analyst at Alliance Trust, says the ECB’s measures have not been effective in rebuilding confidence and QE will happen. “We think that would be very effective for business confidence and economic improvement, greatly increasing market sentiment,” says Mr Barr.

This comes with a caveat because it is all very new and the ECB’s role as the lender of last resort has yet to be stress-tested itself. “Therefore, the ECB can’t do it alone, it requires a co-ordinated response with all governments participating if a downturn is to be avoided,” he says.

Mr Barr believes the global deflationary trend from low oil and commodity prices, and lowering inflation, means the ECB will be forced into acting on QE sooner rather than later.

Though QE will benefit all eurozone economies, raising confidence and it is to be hoped growth, it will require a “we’re all in this together” mindset.

“The euro economy is still vulnerable, and any shock to growth and or inflation could trigger QE from the ECB,” says Legal & General’s Mr Mehta.

If QE comes in, it will benefit all, though the growth won’t be split along the core-periphery axis. Those who have done more to reform –Ireland, Portugal and Spain – will see higher growth than France or Italy, both having largely rejected reform.

Without QE, the disparity between the periphery and the core will only worsen, says IG’s Mr Beauchamp. “Germany can’t lift the whole bloc by herself, but can at least restore her own growth through some judicious spending increases,” he says.

Delays to QE will make the outlook for Europe even gloomier and see investment pulled out of the markets as confidence falters, says Mr Beauchamp.

“If a nation’s stock market is a proxy – even if not a perfect one – for the health of the economy, then investors will much prefer the US over a flailing eurozone,” he concludes.