The UK has never been a likely setting for revolution, but its pension regulation has experienced reform on a scale unsurpassed since Henry VIII executed a hostile takeover of the Church

The greatest change to pensions since the old age pension was introduced a century ago was auto-enrolment. Since October 2012, more than 5.2 million UK workers have started saving for their retirement – an increase of almost 60 per cent.

This is quite a success given that many anticipated high opt-outs in excess of 30 per cent, when in fact they are currently below 10 per cent. This may increase as the smaller employers begin to bring their own pension plans on stream.

Getting workers in is only one part of making auto-enrolment a success. The second part is much more important, but also incredibly difficult – getting them to save the right amount.

The current levels of saving are totally inadequate as far as generating a retirement income is concerned. The global consensus is individuals need to save a minimum of 15 per cent of their salary from an early age to generate a meaningful income for when they retire.

It is critically important anyone in auto-enrolment saves more now, but they must be in a good investment vehicle.

The pension reforms announced by chancellor George Osborne in his 2014 Budget came into force in April. Within a month, 60,000 people had used the resulting freedom and choice to access more than £1 billion of their pension funds.

The vast majority will be small pots of money under the new rules from defined contribution (DC) funds. Those with pensions in defined benefit (DB) plans will have to pay for regulated advice before they will be allowed to access their funds.

This is just one of the costs left out of all the celebratory coverage the reforms received. Seen as an imposition, it is designed to protect the pension scheme member from suffering a huge loss.

Those who accessed even relatively modest sums have lived to regret it, as they found the cost of advice outweighed the benefit.

Some triggered emergency tax payments which will be recoverable unless the income has altered their marginal rate of tax in which case it will not.

A sudden boost in income can also have a disastrous effect on any means-tested benefits an individual may be receiving.

Of course, all this was meant to be dealt with by the government’s Pensions Wise guidance process, but its failings have been acknowledged recently and the service is due for relaunch.

It will take some years for the full benefits of the freedoms to become apparent, but they do offer greater flexibility to the individual saver. Not only in saving for retirement, but as pensions can now be passed on to beneficiaries, they have become a highly tax efficient estate planning tool.

Numbers of withdrawals from DB workplace pensions have been small compared with DC pensions. This may be due to the need for the member to take regulated advice or perhaps members simply know a good thing when they see it.

The flexibilities certainly offer the destitute or those with chronic or terminal illnesses access to funds that will materially improve their quality of life.

But these reforms were not simply about giving consumers greater choice, but generating more revenue for the Exchequer – as some have found to their cost.

A period of consultation has recently ended that may have a profound effect upon pensions savings in the UK.

The government issued a green paper in which it outlined potential changes to the tax relief given to pension contributions. Currently they are exempt from tax as are the investment returns, so you only pay tax when an income is taken.

The government may seek to change the system so that contributions – for at least certain portions of the working population – come from net pay, where the tax has already been paid.

This would be a great disincentive to saving into a pension, which still has to be locked away until age 55. Worse still, removing relief from the contributions will reduce the assets in the fund considerably.

We must remain optimistic that a balance is struck between saving the Treasury money and encouraging long-term saving because auto-enrolment and pensions as a whole are reliant upon it.

However wonderful auto-enrolment and pension freedoms appear, they are both merely works in progress. 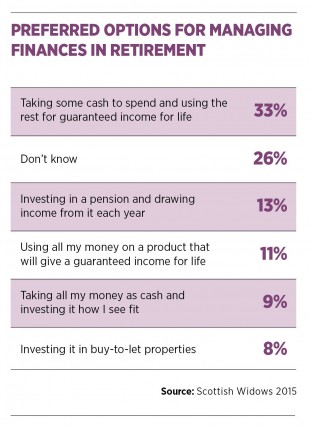 The government knows only too well that contribution levels must increase if the burden on the state is to be reduced.

Rates will increase in 2017, but greater hikes are required to achieve the project’s objectives. That is not likely to happen in this parliament as the government will have bigger fish to fry over Europe. But the longer it is delayed, the worse off the next generation will be in retirement as they hold out – perhaps as late as 70 years of age – for their state pension.

Pension freedoms are also evolving steadily. While some have praised the chancellor for freeing consumers from the shackles of an annuity, an adequate, mass-market replacement is yet to be found.

When asked, the vast majority of savers want a guaranteed income stream in retirement that they can rely upon. This is exactly the function that annuities provide and a great many of those who have retired since the reforms came into force have purchased one.

After 18 months of development, we have started to see the launch of new hybrid products that claim to straddle income drawdown and annuity purchase and offer a smoother transition into retirement.

We’ve come a long way in three years, but in many ways we’ve hardly advanced. The working population of the UK is still saving too little, yet by the time they realise this, it will be too late.