Government has control over the future UK electricity mix, but the choice is limited and being clear would reduce costs and create more British jobs, argues Matthew Knight, strategy director at Siemens Energy, UK

There is no natural market for electricity. Electricity is invisible and must be made and consumed instantaneously. Today’s wholesale electricity market is a complex mix of policy and regulation. Prices are set by old, dirty power stations whose capital cost was paid off years ago. Somehow we need this artificial market to trigger the timely building of the right mix of new power stations.

Over the years, when the market hasn’t delivered the right balance, governments have intervened. Not directly, but by tweaking market rules. Most recently the coalition government, with all party support, introduced the 2013 Energy Act. It gives government all the levers needed to steer the construction of each type of power station.

Successive governments have gone out of their way not to say what mix they want. A desire not to pick winners has led to the official pretence that an unrealistically wide range of options exists and the market will decide. In fact the market will deliver whatever it is set up to do.

Clarity on the future energy mix, and crucially the build rate for each technology, would remove most political risk, reducing the cost of all types of generation and allowing supply chain investment in UK jobs

Investment in any type of new generating plant carries huge risks. It can take two parliaments to consent and build plant which will then operate for another five or more. Investors need confidence in the direction future governments will take.  Political risk pushes up cost of capital for all generation. Lack of a clear pipeline of UK projects stifles investment that would bring down costs and also discourages training of a UK workforce.

It’s as if we have tried to steer the ship of Britain’s vital electricity infrastructure by adjusting the wind in the sails in evermore ingenious ways. It is now time instead for a firm hand on the tiller. “Just tell us what you want” is the cry from many in the industry.

Clarity on the future energy mix, and crucially the build rate for each technology, would remove most political risk, reducing the cost of all types of generation and allowing supply chain investment in UK jobs.

Providing clarity on the future energy mix is less of a philosophical challenge for the new Conservative government than might be expected. Conservatives like markets, but when markets fail they feel it is right to intervene, especially when it’s a vital national infrastructure, such as electricity.

It is better to recognise the UK actually has limited options for its generation mix and focus on delivering that mix efficiently.

Consider 2030. National Grid predicts an annual demand for energy of around 350 terrawatt-hours (TWh) and sufficient capacity for a peak of around 62 gigawatts (GW), 10GW more than the actual peak last winter.

We need to meet these demands within a total limit for carbon dioxide (CO2) emissions. Let’s assume a 2030 CO2 target of 100g per kilowatt-hour (kWh) which is at the upper end of the range likely to be set in 2016. So what part can each technology play in meeting our 2030 energy demands?

The UK’s coal power stations are at least 40 years old and nearing the end of their natural life. By 2030 there should be no coal left on the system.

Gas is the cleanest fossil fuel and offers flexible generation. But the most environmentally-friendly of today’s combined cycle gas turbine (CCGT) plants produce around 400g of CO2 per kWh. Therefore, if we give all of our CO2 allowance to efficient gas plants, we can use them for no more than 25 per cent of our electricity (similar to today).

Most of the existing nuclear fleet is due to close before 2030. By then we could realistically have three new nuclear stations in operation, plus Sizewell B, together generating 7.5GW, around 13 per cent.

These will each contribute around 2.5 per cent of the 2030 energy total, together generating around 11GW. These new technologies can’t scale up for significant deployment before 2030.

Our weather in the UK limits the potential of solar. If cheap enough, solar could deliver up to 10 per cent of our energy, around 35GW, seven times as many panels as today. Any more generation requires large-scale storage.

Onshore and offshore wind are the two renewable sources available to the UK on a large scale. We will need a mix of both. Onshore wind is one of the lowest-cost forms of generation and with 68 per cent public support, more popular than many realise.  Offshore has a higher, but reducing, cost and delivers higher output. Last year wind supplied 10 per cent of all the UK’s electricity. In 2030 this could easily be 40 per cent. 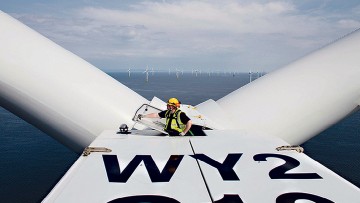 The 2030 energy mix pie chart is deliberately 5 per cent short. During the mid-2020s, we need some flexibility to do a little more of the most successful technologies and a little less of others.

What about new technologies or cost breakthroughs that could change the balance? Carbon capture and storage (CCS) is considered one of these “silver bullets”, albeit adding hugely to the cost of fossil generation. CCS could be demonstrated by 2030, but it will not have been deployed on a large enough scale to change the energy mix significantly. In practice, energy technology doesn’t change very rapidly. The 2030 network will be built mostly from technologies that we have now, with some allowance for continuous improvement.

The good news is this mix works. It would be secure, sustainable and affordable. Over the next 15 years, as coal is phased out, old nuclear is replaced and solar roofs blossom, we would build 10GW additional gas and around 30GW of wind, mostly offshore. Most of these projects are already being developed, as are the smaller contributions from other renewables.

This mix would deliver peak capacity, even on a day with no wind, with average CO2 emissions per kWh less than 10 per cent of an old coal power station.

Nuclear, wind, solar and gas industries are ready and willing to deliver this investment in UK electricity. So once the industry has clarity of direction, we will deliver energy at a lower cost - and create more British jobs.