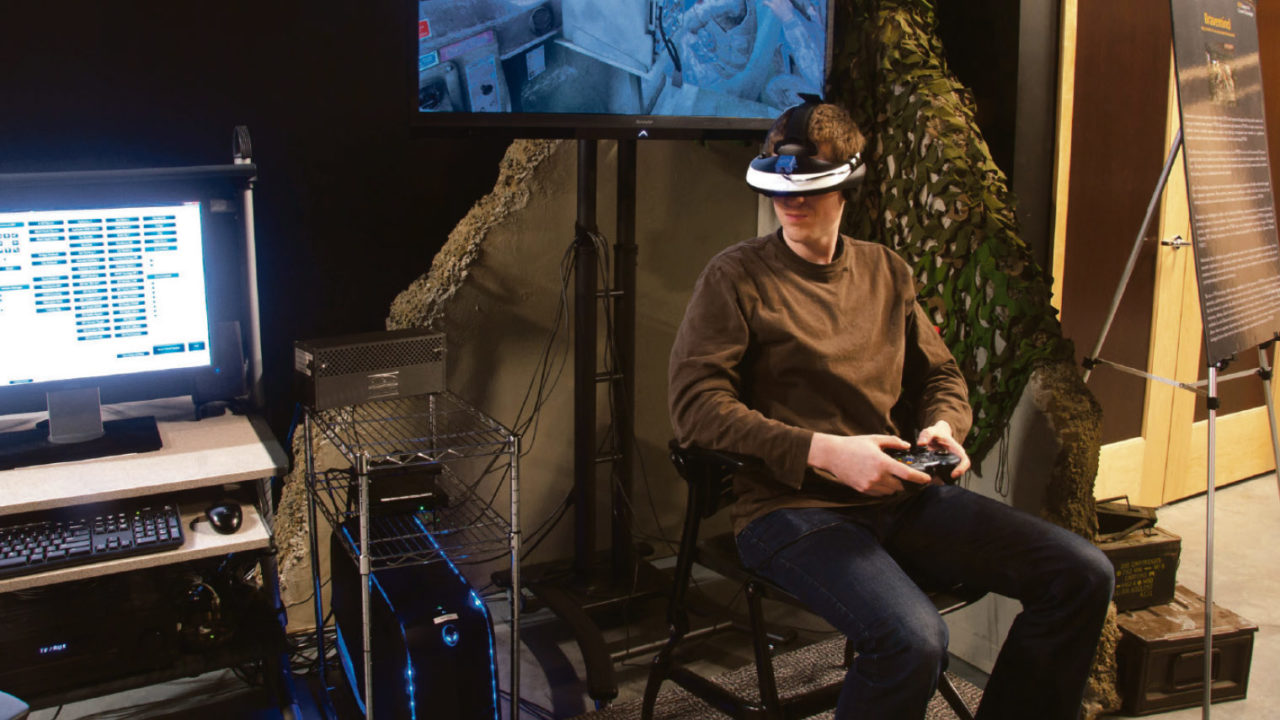 A playful otter and fluffy snowman aren’t the first thoughts of anyone needing pain relief or suffering from dislocating psychological issues.

But the characters are at the vanguard of a treatment protocol that provides a tantalising glimpse of a future where computer games and headsets could be standard hospital equipment.

The otter and the snowman are part of virtual worlds which, in basic terms, fool the brain to switch off pain receptors and concentrate on the images dancing in front of the eyes in standard virtual reality (VR) headsets.

Research has shown it can work well for pain relief and mental health, and its efficacy is now being tested across conditions such diabetes and even paraplegia.

The results, in a range of hospitals across the United States, are impressive with patients reporting their pain diminishes and, crucially, stays away. It appears distracting the brain can lead to a recalibration of its pain pathways.

The “how” and “why” remain big questions that need detailed clinical studies before it becomes accepted as a mainstream treatment.

Dr Brennan Spiegel, director of health research at the Cedars-Sinai Medical Center in Los Angeles, believes the brain becomes overwhelmed when exposed to VR imagery and shuts down pain gateways along the spinal cord. “This will block the pain because the brain is too busy processing other powerful stimuli such as a helicopter flight or dancing with Cirque du Soleil,” he says. 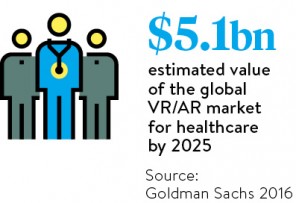 The hospital has treated 200 patients with VR over the last 18 months and is accelerating its use, adds Dr Spiegel, who is also conducting two clinical trials into VR.

“No one truly knows what is happening in the brain, but we can see VR working in two indelible moments. The first is within ten seconds of wearing the headset when the patients turn their head as they become cognitively immersed and then after about three minutes you get the physiological immersion, which you can see in their body language. Their breathing slows, they relax into the bed or the chair and you see them almost escape the four walls of the hospital, and that is when you know it is having an impact,” he says.

His early studies have shown that 20 minutes’ exposure to VR games reduced patients’ pain by 24 per cent and dropped their mean pain score, out of ten, from 5.5 to 4. This significant level of change could lead to quicker recovery periods, reduced hospital stays and less reliance on medication, particularly opioids. But Dr Spiegel cautions against regarding VR as a miracle cure as not everyone responds.

“We do need evidence which, just like for any biomedical advance, needs to be rigorous, peer-reviewed research to help figure out what works and what doesn’t,” he says. “But we are going to see more and more of it in hospitals.

“In the 18 years I’ve been practising medicine, I cannot think of anything that has a more immediate benefit for a patient, short of restarting someone’s heart. I can see someone’s body language change within five minutes so there is a future for this.”

The otter and snowman are the work of Seattle-based DeepStreamVR’s Cool and SnowWorld software programmes. A recent study by investigators at a Tennessee pain institute found that Cool delivered a 60-70 per cent pain reduction for patients who felt the benefit for up to 48 hours.

Ari Hollander, DeepStreamVR’s co-founder and chief technical officer, believes VR is a potent therapy because a digitally mature generation is willing to accept its potential.

“Distraction is part of the equation, but it is lots more than that,” he says. “We have seen brain-activity pictures and watched it move from the centres about pain perception into cognition and other activity areas, and distraction cannot explain the results and lasting effects.”

He also feels the body can reroute its pain pathways after VR exposure and that ability to change the structure of brain behaviours has immense implications for treating phobias and conditions such as obesity and anorexia as well as psychological conditions.

“We have worked with post-traumatic stress disorder (PTSD), phobia therapies, behaviour change and pain relief, and doing that in an individually responsible way is a tremendous thing,” Mr Hollander adds. “We are going to build up a database of information and these systems will be doing diagnosis as well as treatment soon. The future is for VR to be used in dynamic personalised medicine.”

Ferring Pharmaceuticals ran a symposium in Paris in September exploring how gamification can improve adherence to medication. Kristine Paridaens, its senior medical director gastroenterology and endocrinology, global medical affairs, comments: “Gamification is everywhere, but it’s only recently that we’ve started questioning the positive impact it can have on people’s lives, particularly on their health. We’re keen to see health gamification used to support clinical practice and that’s going to involve working more closely with the medical community.”

The economic impact could also be transformative as 22.75 million prescriptions were written for painkillers in the UK in 2014, compared with 10.7 million in 2010, with experts becoming increasingly concerned about their long-term health risks.

But healthcare remains the trail behind the comet-like progress of entertainment and wellness VR with Google, Samsung, Facebook and Sony all chasing its mass-market appeal.

Getting an affordable product to the high street involves less technical hurdles than achieving medical device approval, so progress in healthcare VR will be dislocated from consumer availability.

VR can be used to conquer phobias and fears with exposure therapy increasing doses of their fear, such as heights or spiders, with no risk

Professor Maged Kamel Boulos, chair of digital health at the Alexander Graham Bell Centre for Digital Health, University of the Highlands and Islands, in Elgin, says VR has graduated from a niche discipline ten years ago with research papers only amounting to a few hundred compared with the 6,500 circulating today.

“VR can also be used to conquer phobias and fears with exposure therapy increasing doses of their fear, such as heights or spiders, with no risk,” he says. “It can be used to develop social skills for autism and relieve anxiety and depression.

“We can employ it to help carers understand what it is like to have schizophrenia and therefore have more empathy with their patients.”

Exposure therapy is at the core of one of the most successful VR releases, Bravemind, which assesses and treats military personnel returning from Afghanistan and Iraq with PTSD. Patients can be gradually immersed into computer models of patrols, firefights and conflicts that represent their traumatic experiences and allow the healing process to advance.

The software, designed by the University of California’s Institute for Creative Technologies, has shown results that improved the mental health of soldiers who did not respond to other forms of therapy.

“VR is at its most powerful with collaborations involving digital designers, software engineers, clinicians, psychologists, neurologists and patients,” adds Professor Boulos. “It is akin to producing a movie with lots of disciplines working in harmony. The best is still to come over the next three to four years.”

Evidence that VR has stepped out of the shadows and is shedding its gimmicky cloak comes from the recent release of the stage play Ugly Lies the Bone, starring Meryl Streep’s daughter Mamie Gummer. It received rave reviews for its harrowing portrayal of a female soldier using VR to help conquer her corrosive PTSD.

Paralysed patients are using VR to regain limb function and walk again thanks to a pioneering project.

Scientists developed programming that linked a virtual reality system to patients’ brains and taught them how to operate their own avatar, or digital likeness, in game play.

The mental imagery needed to move their characters to perform acts such as kicking a ball is believed to have the power to stimulate surviving spinal cord nerves that become dormant when a patient is restricted to a wheelchair or bed after paralysis.

Eight patients, who had been paralysed for between three and thirteen years, used VR and a brain-controlled exoskeleton to stimulate motor function in the year-long study.

The results, recorded in the publication Scientific Reports in August, were so successful that four of the patients were able to upgrade their condition from paralysis to partial paralysis and a 32-year-old female patient, paralysed for 13 years, was able to walk again.

Neuroscientist Miguel Nicolelis, who led the research, says most of the patients also saw improvements in bladder control and bowel function.

“What we’re showing in this paper is that patients who used a brain-machine interface for a long period of time experienced improvements in motor behaviour, tactile sensations and visceral functions below the level of the spinal cord injury,” he says.