“A financial director of a National Health Service trust recently told me it should not be called the NHS because it is regional and about treatment of illness,” says Stewart Johns, Prederi’s managing director central public services. “Instead, he suggested that it should be called the Regional Illness Service. However, he didn’t think the service would be as popular if it was called RIS.”

The remark was light hearted, but as he knew only too well, it carried an element of truth, particularly around the health or illness element.

Addressing the Kings Fund recently, the NHS leadership presented the 2014 Commonwealth Fund study showing the NHS is rated the top health service of all the major economies in the world.

“I won’t dispute that fact, but I would point out that the same study had UK population health, or healthy lives, ranked second from the bottom in the same group of countries,” says Mr Johns.

There is a need to increase and improve public health, self-care and social care so people can stay healthier and remain in the community

There is growing recognition among all the major political parties, and the NHS itself, that the biggest transformation required is that of creating clearer links between health – and illness – wellbeing and social care.

Mr Johns adds: “There is a need to increase and improve public health, self-care and social care so people can stay healthier and remain in the community, while reducing the huge and growing demand for GPs and hospitals. This will give a better outcome for the population and a more manageable cost to the taxpayer.”

The Prederi modelling team have carried out a systems-thinking study into the interdependencies of the causes and effects of keeping a person in the lower-risk categories of health (Figure 1) by supporting them when they are still relatively healthy, rather than waiting for them to be ill or get injured. 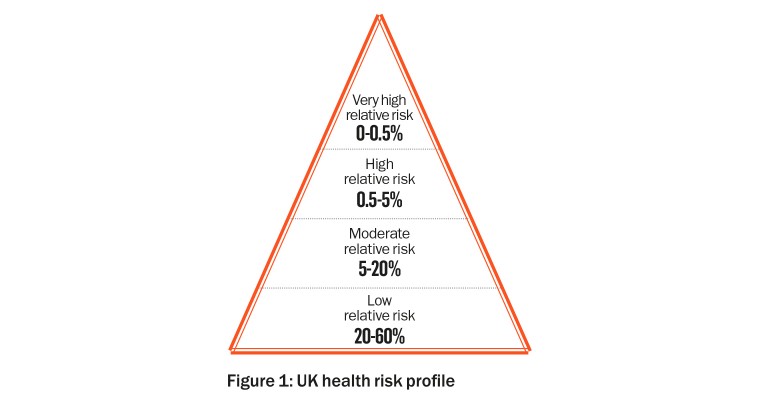 For example, when a patient is discharged from hospital, they could be given reablement for up to six weeks. Reablement is predominantly a social care service that works with the frail to reduce the likelihood of a return to hospital due to a fall, infection or illness and to improve life in his or her own community.

Reablement halves the likelihood of a quick return to hospital. In the long term, it also reduces or delays the person staying in a care home.

“Our study looks in detail at how people move through the risk profiles as they age and/or become more ill,” explains Mr Johns. “We have examined how an upfront spend in public health and social care can improve lives and reduce long-term costs. The result indicates there is a return of six times the investment in the first ten years and even more if the analysis is over a longer time frame, which takes long-term social care into consideration.” (Figures 2 and 3)

This result, while not unexpected, provides real evidence that the upfront investment in social care is worthwhile.

Mr Johns concludes: “The major transformation would therefore be to move the entire monolithic health and local authority structures into a more dynamic, integrated person or patient-focused organisation within a single budget, where population health is the true measure of success, rather than just being great at healing ill people.”

This is a short article providing a simplified set of results to a complex systems-thinking model that has linked the major aspects of health and social care. If you would like further information, please contact Stewart Johns at stewart.johns@prederi.com

For greater detail on the study please go to prederi.com