Steve Jobs once said: “Sometimes when you innovate, you make mistakes. It is best to admit them quickly and get on with improving your other innovations.” Apple’s late chief executive wasn’t a fan of time-wasting – speed was his key to taking on competitors. When it comes to agile leaders, there aren’t many more obvious examples.

Agility in business is the quality that allows an enterprise to embrace market and operational changes as a matter of routine. It’s a quality which has helped many companies to weather the economic storm of the last six years.

“CEOs with agility adjust, adapt, respond and are resourceful in the face of change,” says Steve Newhall, managing partner of talent consultancy Korn Ferry. “They perform well under first-time, challenging conditions. They can take the helm of a struggling business and make it prosper quickly – think Alan Mulally at Ford or Harriet Green at Thomas Cook.

“Equally they can stay in a company through multiple business cycles and fundamental business model changes and still come out on top – Sir Martin Sorrell would be classic example of this.”

Companies flourishing in difficult situations are a veritable breeding ground for agile leaders. Startups are a classic example. Starting from the ground with nothing and going up against big competitors in crowded marketplaces is not easy. For this reason, many people look to Silicon Valley for great examples of agility in management, and it’s not just Mark Zuckerberg and Elon Musk nailing it in the Valley.

Joe Fernandez started social media ranking firm Klout in his bedroom in New York in 2008. He quickly realised his business needed to be part of the Silicon Valley crowd so he uprooted it from New York to San Francisco and starting building his network again. But his agility certainly didn’t stop there.

“We used to share an office with Twitter,” he says. “This presented an opportunity with lots of senior marketers coming into the building to see Twitter. I used to monitor the hashtag #twitterhq and, whenever I’d see ‘looking forward to visiting #twitterhq’, I would tweet them and set up a meeting. We got lots of business that way; reacting quickly helped us to get a foot in the door with potential new customers.”

Another important element to being an agile leader is the ability to fail. As Steve Jobs said, if something isn’t working don’t be afraid to admit defeat. An agile leader achieves by trying things others might not have, but this will inevitably lead to some unsuccessful strategies.

“In 2009 I created a new business, but unfortunately didn’t do enough research and assumed what worked in London would work in the North West and that is not so,” says Karen Melonie Gould, chief executive of Gateway2Enterprise.

NO FEAR OF FAILURE

“As an agile leader it’s important to not be afraid of failure. I have had several successful businesses, but also several failures. It can be a bittersweet pill to swallow, but as long as you can learn and adapt from the failures you will continue to flourish.”

The Economist Intelligence Unit surveyed executives from 19 different industries in 2009, 44 per cent of whom had revenue of $500 million or less and 31 per cent with revenue of $5 billion or more. Nearly 90 per cent believed organisational agility is critical for business success. But what, if any, are the downsides of becoming an agile leader? 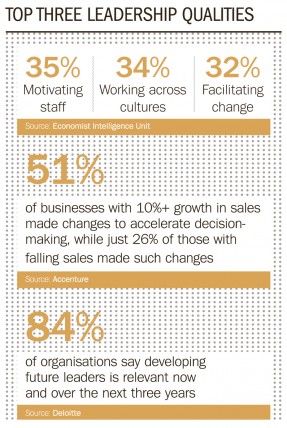 “If you are truly agile, I believe there are no downsides. Transitioning to becoming an agile leader, on the other hand, can have its downsides because it means you have to leave old working practices behind which takes some time to work through,” says Simon Church, chief executive of NTT Com Security.

“The biggest challenge is ensuring that the people around you are as agile and empowered as you need them to be for the business to succeed. This is particularly challenging in a multi-national and multi-location organisation. You have to ensure people around the globe and at all levels understand their remit, level of empowerment, overall strategy of the company and the component part they play in that strategy. The larger the company, the harder it is.”

Being an agile leader may come naturally to some, but it is a skill that can be taught. Often it is about stepping out of your comfort zone and adopting a new mindset. A leader can change one small thing and it can have a huge effect on the firm’s agility. The size of meetings, for example.

Steve Jobs was once in a weekly meeting with Apple’s ad agency and noticed someone who didn’t regularly attend. Having asked her who she was, he politely asked her to leave. “I don’t think we need you in this meeting,” he said. “Thanks.” He didn’t allow spectators in his meetings. Anyone who wasn’t essential was not invited. It was his way of ensuring efficiency, simplicity and speed. Now Apple is one of the world’s biggest companies.