In the suitably dramatic interior of the University of the Arts London (UAL) students are working with clay, studying vintage copies of Vogue magazine, hammering away at jewellery benches and spreading out freshly dyed fabrics on worktops.

Housed in an old granary where the walls still bear numbering for various former storage areas, the university places a strong emphasis on the practical. Helping students to focus on how items will look when they’re actually produced, rather than simply thinking about them on the computer screen or sketch pad is key – and now 3D printing is making this essential element of the design process easier and more accurate than ever.

The use of 3D printing is very much part of the curriculum, explains Nicholas Rhodes, programme director of product, ceramic and industrial design at Central Saint Martins, a constituent college of UAL. “There’s a lot of interest among students in how it works and when to apply it,” he says.

The technology is part of a new empowerment of designers that includes crowdfunding and a change in their relationship with industry. “Young designers are more likely to be partners than servants. It’s the students themselves who are really pushing the boundaries here,” says Mr Rhodes.

Charles Dokk-Olsen of architects Shepheard Epstein Hunter, whose work includes schools, housing developments and offices, says: “3D printing allows us to produce models with complex geometry in minute detail that would be virtually impossible by hand.” In one example, the firm used its 3D printer, which had a price tag of £30,000, to produce a model of a balcony for a client, which curves in two directions to form a wave around the façade – a difficult model to create by hand.

“Our practice produces physical models for nearly every project we work on because we’ve found that this is consistently the best way to communicate ideas to clients of every age,” says Mr Dokk-Olsen. “On our schools work, we consult with staff as well as pupils as young as five, and all ages are enthused and excited about seeing spaces in a physical model they can move around and explore over a table.”

In addition to illustration, 3D printing is good for testing ideas. To create Rock on Top of Another Rock, a sculpture for the Serpentine Gallery in Hyde Park, consulting engineers Arup used 3D scanning and 3D printing to produce exact physical models of the rocks at one twentieth of their actual size, enabling them to explore different balance configurations to find the most stable, and at the same time realise the vision of the artist.

Fashion designers are increasingly using 3D printing not just as a means of creating a prototype for review, but of manufacturing the finished product. It also allows them to work with entirely new materials.

“I feel excited when I test new materials within the printing, such as flexible rubber on which I could print colours or the transparent glass-like material I used for the crystal dress in my recent Magnetic Motion collection,” says Iris van Herpen, a Dutch designer who worked for Alexander McQueen in London and went on to present her first collection in 2007 in Amsterdam.

Her cutting-edge approach to creation, merging science and fantasy, caught the attention of France’s Chambre Syndicale de la Haute Couture and she counts Icelandic performer Bjork among her fans. Recently, she created the 3D-printed transparent, crystal dress in collaboration with Niccolo Casas, an architect whose work combines fashion and architecture.

In a far more down-to-earth context, designer Sebastian Conran, who is working with part-work and collections publisher Eaglemoss Collections to launch a weekly magazine that provides readers with all the components to build their own 3D printer at home, compares the satisfaction of producing something tangible offered by 3D printing with his childhood love of Meccano and Plasticine.

“It will certainly encourage more people to think of themselves as designers and to consider doing it as a career,” he says. “I can imagine a time in the future when your little boy might want a bit more track or a bridge for his model train set and you’ll just be able to knock one out yourself on your printer.”

People will be able to create something on their iPad and then see the finished product, he predicts. Although, this will mean designers will have to focus more on their computer-coding skills.

At the London College of Fashion, jewellery students are using silver and gold in 3D-printing machines to create products. “We have students who are working on creating materials that are like fabrics with 3D printing; they’re inspired by what people such as Lady Gaga have done,” says Lynne Murray, director of the Fashion Digital Studio at the College. “At some point, they’ll be able to print bio materials and cosmetics such as face creams.”

However, Mr Rhodes at Central Saint Martins sounds a note of caution to both professional designers and enthusiastic lay people. “Students get very excited about the idea of going from screen to 3D, but you still need good design skills and the technology isn’t right for everything,” he says. “When desk-top publishing came out some years ago, lots of people thought that we’d all become graphic designers, but that didn’t happen. You still need skill and training – and, of course, there’s no substitute for talent.”

PRINTING DRESSES AFTER A FASHION 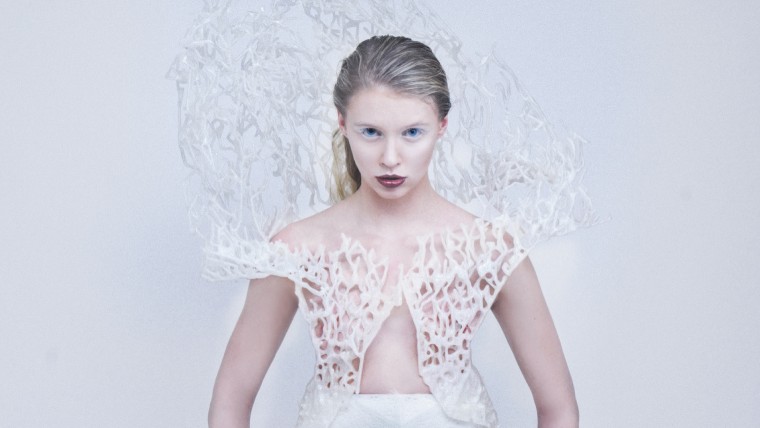 Francis Bitonti is at the forefront of the 3D revolution in fashion. The architect turned designer founded his eponymous fashion label in 2007 and teaches at London’s Ravensbourne College in Greenwich.

“When I first came across 3D printing it blew my mind and seemed to invert everything I knew about design,” says the 31 year old who is based in New York. “It’s been very much a driver for my creativity. I use it the way that a painter uses paint. What I love the most about it is the flexibility. It allows you to work with very complex geometry.”

You have to adapt quickly to the new technology

Bitonti’s most famous design to date is a 3D dress for the burlesque artist Dita von Teese. Made from more than 3,000 moving parts each of which is 0.5mm thick, the dress required von Teese to climb into a corset that was then used to create an image from which the three-dimensional “print” was made. Black, severe and fetishistic, it’s adorned with more than 12,000 Swarovski crystals.

Doesn’t something that makes his work so easy actually detract from his skill as a designer? Couldn’t anyone now do it? “I’ve been asking myself this question,” he says. “Am I putting myself out of job? It’s a bit like the situation with the music industry when people started being able to download tracks. You have to adapt quickly to the new technology.”

Next year the Francis Bitonti studio will launch a luxury collection, introducing 3D printing into a sector where exclusivity, craftsmanship and high price are watchwords – and many of the things that this new technology pushes against.

Bitonti sees the irony. “This kind of manufacturing is the opposite of luxury because it’s about easy distribution and ubiquity,” he says. “I’m aiming at the millennials, women who have grown up with access to luxury brands. But they’re looking for opportunities to contribute here, such as co-creation.”

How the big names of Bond Street and Fifth Avenue will react to the arrival of a newcomer who allows customers to “print” their own luxury clothes, bags and jewellery remains to be seen.