As the virtual reality market grows exponentially, more and more consumers, who want the greatest choice of products, are turning to one company that can offer them apps for all devices 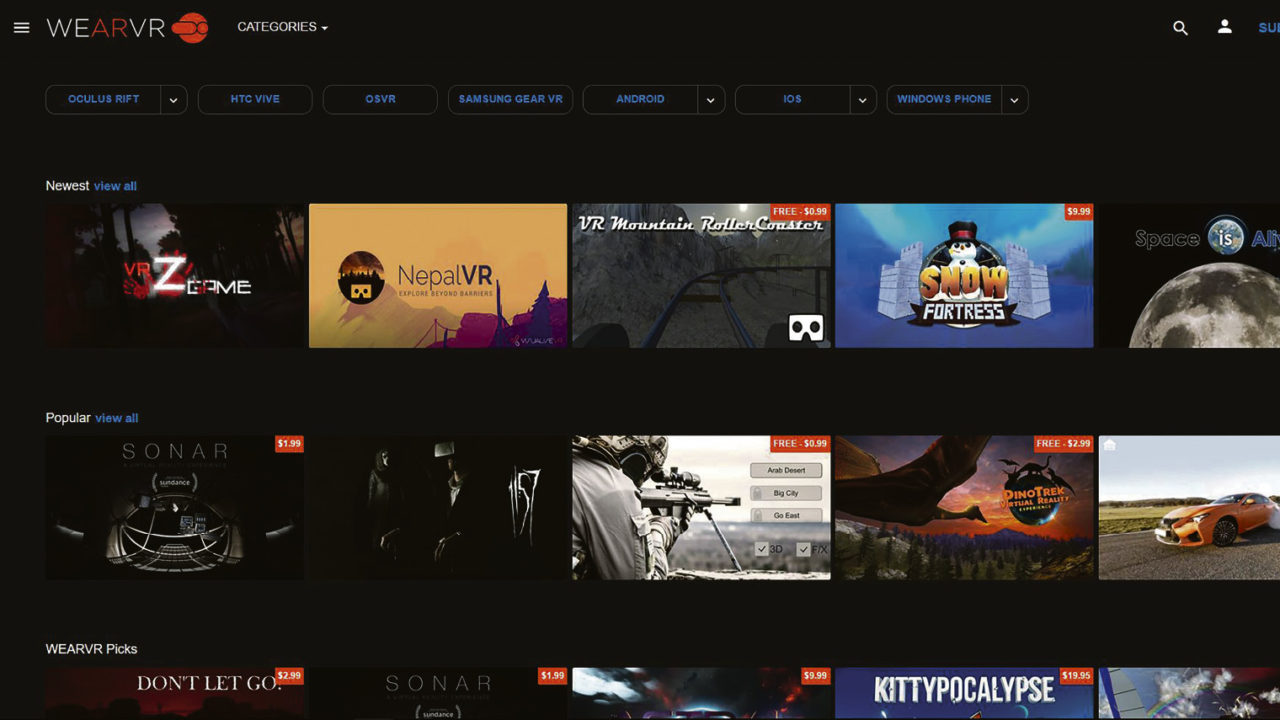 The explosion of virtual reality (VR) content over the last few years has offered consumers and developers more choice than ever before. The problem is that this vast range can leave many consumers feeling deluged while developers are increasingly concerned about how to get their products in front of the widest audience.

It’s this issue that has led to more and more consumers as well as developers looking to a new, fast-growing independent VR app store called WEARVR. “We have content for all headsets and that’s why people love us,” says Andrew Douthwaite, chief operating officer. “Rather than having to visit various different stores and browse by system, we have all the main options under one roof. Customers can then download content either directly from us or via an external app store.”

Visitors to the site are presented with a menu with Oculus Rift, HTC Vive, OSVR, Samsung Gear VR, Android and iOS, and choose whichever works best for their headset. “We started WEARVR two years ago because it was difficult to find VR content. Within four months of launch and no marketing spend, we already had 100,000 downloads,” says Mr Douthwaite.

The company has grown fast, raising $1.5 million in February last year from a group of Atlanta-based investors. WEARVR now has over 1,500 unique VR apps, more than any other store. It has had more than 1.7 million downloads, is currently closing its second round of funding and is about to launch into the Chinese market.

New features the company is working on include personalised recommendations, browsing in VR, cross-platform integration and exclusive titles, similar to Netflix originals. The company is partnering with new headset manufacturers to bring WEARVR content on to their devices. This is great news for developers as it provides them with access to new markets.

Having completed the first-ever market research study for kids using VR, it was clear to the company how much youngsters understood and enjoyed experiences in VR. “We launched our kids’ version, called Bogglebox, promoting child-safe, parent-friendly VR experiences. The response has been terrific,” says Mr Douthwaite.

The company is very excited about mobile, with their own mobile app already installed more than 200,000 times. “Mobile VR is huge and is growing exponentially. Most people already have the technology to experience VR, sitting in their pocket,” says Mr Douthwaite. “There’s so much great content out there, our app is the easiest way to find the best and the newest.”

But it doesn’t stop there. There’s a growing market for 360 video experiences. Companies such as Mentour 360 have an app available through WEARVR, which offers users a 360 film experience showing the inside of a real cockpit and how a professional flight crew works.

Other experiences include architectural walkthroughs of properties. For example, ViewPort have several visualisations on WEARVR that showcase the opportunities in real estate.

“Virtual reality is about so much more than games, as we’re starting to see,” says Mr Douthwaite. “It also has medical and therapeutic applications.” The WEARVR team see the potential for VR apps to help people to handle stress and anxiety, and to overcome phobias.

“Meditation apps can now help you to feel that you’re lying on a beach, for instance, with the sound of the waves around you. Add to these the use of physical sensations and vibrations, and you can see how virtual reality is being taken to an exciting new level.”

And that’s something WEARVR’s growing army of fans are already looking forward to.