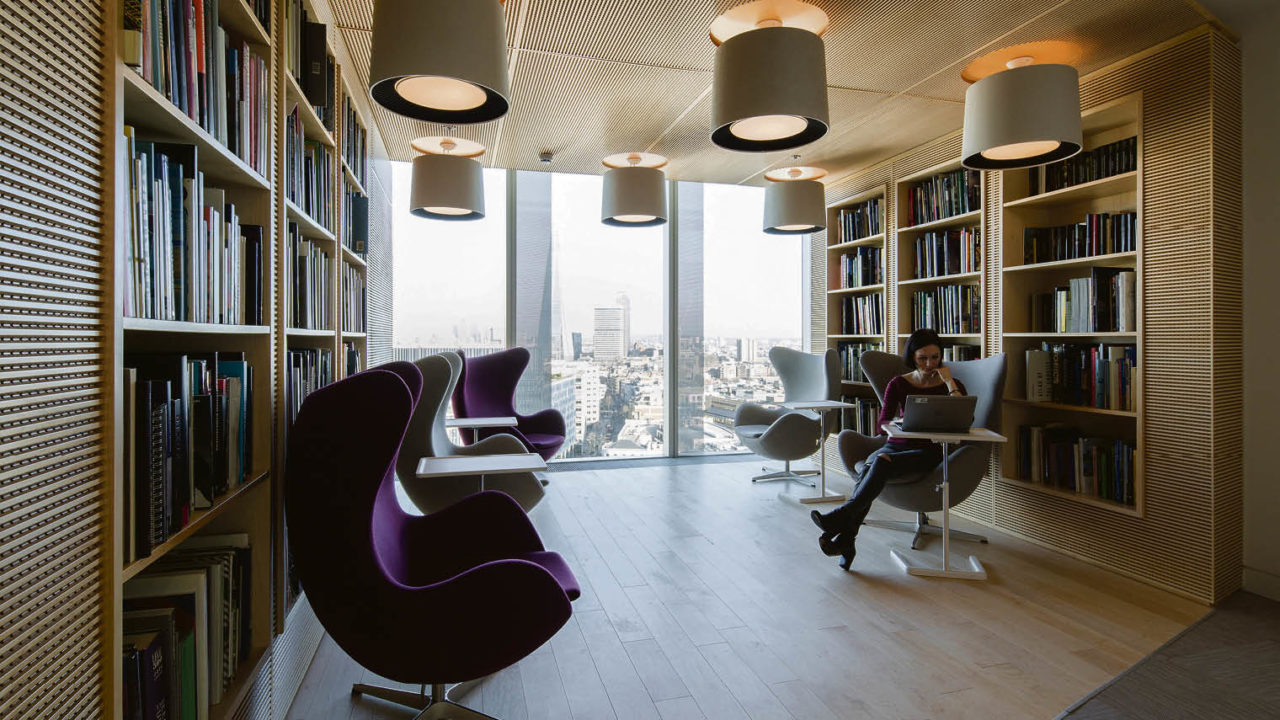 Your desk is getting ready for your arrival. By the time you have been whisked up to the correct floor in the lift that automatically knows what level you are going to, the workspace you have booked with your smartcard will be powered up – ready for you to plug in your laptop and start work.

Then before you head off to your meeting, the lights, air con, heating and audio visual will all be switched on so the conference room is ready without you having to flick a switch.

Your smart office also knows when it is too sunny and automatically provides some shade, and sensors ensure the working environment, which is boosted by much more fresh air than average, enables you to be highly productive.

Many of the technical innovations incorporated in the fit-out were designed to give greater energy efficiency and a lower environmental footprint. So, the reason why desks, rooms and entire floors can power down when not in use is that the company calculated it was spending more on energy when the offices were not in use than when they were.

UBM’s offices are now a beacon of best practice, with the sustainability of the building at 240 Blackfriars recognised with an award from the CDP (Carbon Disclosure Project) and a LEED (Leadership in Engineering and Environmental Design) Platinum Commercial Interiors Rating.

However, these innovations, which also include follow-me printing, follow-me phones – so your extension comes with you – hot lockers and cashless vending all controlled by a single smartcard, have done more than cut energy bills – they are changing the way people work.

Stephen Vause, head of facilities management at UBM, says: “Before we implemented mobile working, we were using our office space only 42 per cent of the time. Now, with 140 people and 100 workstations, our occupancy is between 85 and 90 per cent.”

The smartcard booking system also prevents desk-hogging – staff arriving early and claiming a desk by leaving a jacket or bag there – so employees are forced to work in different ways and with different teams often supported by technology.

Gensler, the architects for UBM’s HQ, says unified communication technologies, such as Skype for Business, will soon be adopted by 78 per cent of companies making it clear that mobility and collaboration are soaring up the business agenda.

“Our latest UK Workplace Survey 2016 found that since the last research in 2013 there has been a doubling in the number of these collaborative tools in the workplace,” says Philip Tidd, principal and head of consulting, Europe, the Middle East and Africa, at Gensler, which incorporated virtual communication (VC) rooms at UBM’s office. As a result the publishing-come-events firm has seen an increase in productivity as staff can collaborate on a global scale and without the need to travel.

Microsoft’s Surface Hub launched this year is helping to drive this VC revolution in the office by transforming presentations into more interactive team discussions that unlock the power of group by enabling anyone to touch data on the screen to expand on a point or pick up a pen and draw on the screen.

Likewise, social media is advancing in the office with Workplace by Facebook recently taking on Slack, Jive, and Microsoft’s Yammer and Teams, and enabling a chief executive to share a video with staff and group chats to discuss innovations and ideas.

The fact that individuals are already familiar with the technology has increased its take-up. The same applies to trackers as many use them for fitness, but they are now moving from industrial settings, such as warehouses, to other workplaces.

Information technology research company, Gartner estimates that two million employees worldwide will be required to wear health and fitness tracking devices as a condition of employment by 2018.

Wearables with head-up displays are permeating the office environment with Gartner predicting they will help bring complex business processes to life in a new, simple, visually compelling, action‑oriented way, while advancing the devices from being gadgets to valuable tools for the business.

“Wearable technology is also part of a larger trend in intelligent buildings to give inhabitants more control over their environment,” says the British Council for Offices in its newly published report Wearables in the Workplace.

For example, Comfy from Building Robotics uses an app linked to a building’s heating and air conditioning. Like most of these new technologies, it is very people-centric and over time as individuals enter their temperature preferences, the system’s algorithm enables the building to be tuned to the occupant. It combines the internet of things with a trend for systems to be increasingly intelligent.

While some intelligent and intuitive software platforms will eradicate jobs, with UBS in its Workforce Futures report warning that “the entire workforce landscape is about to reshaped”, they will also make the technology we use in offices and offices themselves much more “intelligent” as systems understand, learn, predict, adapt and potentially operate autonomously.

“Over the next ten years, virtually every app, application and service will incorporate some level of AI,” says Gartner vice president David Cearley.

However, some of the biggest technological advances will not change the way we work in the office environment, they will change the reason why we go to the office.

“5G which will be transformational in terms of the speed at which you can download information and this will change what the office is for,” says Gensler’s Mr Tidd.

“Fixed terminals on fixed desks are already being replaced by laptops and a greater variety of work settings because the primary purpose of the office is increasingly to build social capital and to attract talent.

“Employees want to be connected emotionally, not just electronically, and if you no longer have to come into work to work, the office needs to be a place you want to come to. And it will be as much about disconnectivity as connectivity. So, hand in hand with these technological advances is an increasing demand for areas in offices where there is no tech at all to allow people a space to think.”

The Edge in Amsterdam is not just the greenest building in the world, it is also one of the smartest. The toilets flush with rainwater, 28,000 sensors measure temperature, light, motion and humidity, each of the LED light panels requires only a tiny amount of electricity, and workers can control temperatures, lighting and blinds via apps on their smartphones. Even the coffee machines are connected to the internet so the facilities team can spot when they are running low on supplies and top them up. In the summer, hot water is stored in wells in the ground and is then used to help heat the building in winter, while cold water comes the same way thanks to an aquifer thermal energy storage system. Forget radiators, cables run through the ceilings with one carrying data and the other water to provide an ambient temperature. Winner of the highest ever BREEAM (Building Research Establishment Environmental Assessment Methodology) score for its sustainability, the Edge, designed by London-based architects PLP Architecture for Dutch firm OVG, is powered by solar panels on its roof and the roofs of nearby buildings. The only problem it faces is people. Deloitte, the building’s main tenant, allows staff to connect to The Edge via an app, so before they have even left home it can check their schedule and find them a desk depending on the tasks they need to perform. When they arrive at the building, it recognises their car and directs them to a parking place. The app even knows their preferences for light and temperature. However, usage to book desks has been low as people tend to want to work in the same place every day and sit with the same people. Some staff have even booked rooms they do not intend to use, to gain an extra parking space.