The rise of the mega HQ

The rise of the tech giants known as the FAANGs (Facebook, Amazon, Apple, Netflix and Google) along with fast-growing upstarts such as Uber and AirBnB, has led to a rash of mega-projects as these companies build new headquarters that reflect their status.

The scale of these projects is so ambitious that they are starting to affect the companies that build them and the construction industry at large.

The buildings are often visually striking (think Apple’s circular HQ in Cupertino, California), innovative and on a staggering scale – the 2.8m sq ft doughnut-shaped Apple Park is on a 175-acre site and is believed to have cost around $5 billion. Amazon, earlier this year, unveiled The Spheres at its Seattle HQ, hosting 40,000 sub-tropical plants across three giant biospheres. Microsoft’s plans to upgrade its Redmond HQ will boast 131 buildings that can host 55,000 workers (as well as cricket and soccer pitches) while Facebook has hired the superstar architect Frank Gehry to design new buildings for its campus.

These ambitious and radical workspaces are all about attracting and retaining the best talent, says Kenny Ingram, global industry director for Construction, Engineering, & Infrastructure at IFS. 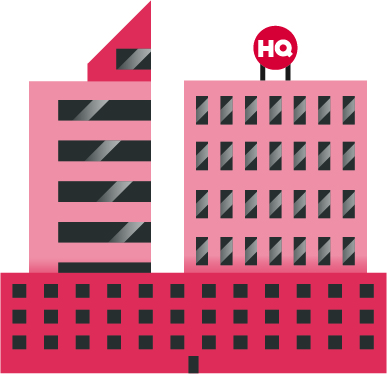 “These companies value their employees very highly,” adds Rupert Green, a technology consultant at the developer Lendlease. “They want to get the most out of them so they’re always thinking of their wellbeing, ensuring that everyone has natural light and the space they need, how they’re going to bump into each other – it leads to a very different building to accommodate all these different spaces and functions.

“These offices have to be distinctive and different – in part they are about putting a company’s colours on display. They are important symbolically and in terms of brand,” he adds.

“This of course puts pressure on designers and firms to deliver on increasingly elaborate and lofty ambitions,” says Ingram, “and we are already seeing this emphasis on sustainability and technology permeate down to more and more projects in the construction industry.”

Bloomberg’s UK HQ, which opened in 2017 in the heart of the City of London, is said to be the most sustainable office building in the world, with features including bronze “gills” that open and close as part of a passive ventilation scheme. The media firm says that the $1 billion building uses 70% less water and 40% less energy than a typical office building.

“These are absolutely bespoke projects that have a lot of innovation requirements from the design process onwards,” Green adds.

This means that the construction partners on these projects are getting involved at a much earlier stage than normal, providing advice on design, logistics and materials. “A lot of effort is spent on understanding how everything hangs together. You have to think how everything integrates before you start building because once you are on site, it’s too late,” Green says.

The pressure on designers and firms to deliver on increasingly elaborate and lofty ambitions means that technology will be key to delivering and managing projects on this scale, Ingram says. “Those firms that wish to compete in the era of the ‘mega-HQ’ will need to ensure that they are considerably further along on their journey to digital maturity,” he stresses.

New flagship buildings are increasingly data-enabled, with building management systems of increasing sophistication giving users a lot more control over how the building is used. This enhanced level of connectivity and the high profile of mega-HQs also means that security, both cyber and physical, is of growing importance.

“These HQs throw up security issues because they are so high-profile. They offer a single point of attack that can shut down an entire company,” says Ian Robinson, business development manager at security company RWS. “It’s really important to design security measures in from the start of the process. Retrofitting them is a nightmare.”

Equally, it is important to remember that the technology is there to support the workforce, not the other way round, says Michael Teixeira, CEO of UK tech group MVF, which is planning a new UK HQ in London. “Technology will play a huge part in the building’s infrastructure and design to support our work. In saying that, when planning an office space, I don’t believe you should start with the tech – the tech should support the people.

“With recent reports showing workplace loneliness is on the rise in the workplace, it’s critical companies don’t make the mistake of opting for tech that isolates over tech that brings people together. It’s important to us that our spaces encourage human interaction and have natural opportunities for people to have those ‘water cooler’ moments that often lead to collaboration.”

Looking to the future, these firms’ influence on the construction sector cannot be understated, says Ingram. “Tech giants such as Amazon are at the cutting edge of developing artificial intelligence solutions, which are already beginning to influence the technological solutions driving construction forward.

“Additionally, as these companies expand their operations physically with more regional offices, distribution centres, and warehouses, we may even see them venture into the construction industry themselves,” he forecasts. “Watch this space…”