Corporate culture has undergone drastic changes over the past decade. Not only are traditional nine-to-five workers increasingly being replaced by a more mobile and flexible workforce, but the move towards open-plan offices is gaining traction. Recent innovations in unified communications, alongside the most recent global economic downturn, helped speed up this transformation, which has led enterprises to support more manageable, multi-use open-office spaces.

Open-office floor plans may help meet the changing demands of employees, but the noise and disruption caused by these offices has brought about the need for new collaborative spaces, where staff can have impromptu meetings without being disputed. There is a growing shift in focus taking us away from the conventional large conference rooms in favour of smaller, ultra-connected “huddle rooms”, which some businesses refer to as “breakout rooms” and are typically used by smaller groups of two to four people.

“We are seeing a transition to companies creating small and flexible spaces, mainly driven by the prohibitive cost of maintaining a huge IT infrastructure,” says Marco Landi, Europe, Middle East and Africa president at Polycom, a global leader in high definition video-conferencing, voice-conferencing and telepresence. “The transformation to huddle rooms enables everyone to be able to make use of them. Now meeting organisers don’t have to schedule a meeting or ask IT to help; they can just walk into the room and the meeting can start.”

We are seeing a transition to companies creating small and flexible spaces, mainly driven by the prohibitive cost of maintaining a huge IT infrastructure

Although the definition of huddle rooms can be quite broad, in essence these spaces are small meeting rooms intended for informal conversations, presentations, brainstorming sessions, conferences with remote workers or any number of other collaborations. According to Wainhouse Research, there are an estimated 50 million huddle rooms globally, showing that virtually all enterprises can capitalise on the potential of these spaces.

Huddle rooms are far from a new concept, but it has only been in recent years that companies have begun to grasp the possibilities presented by these under-utilised areas. Standard large meeting spaces have often been the default setting for all types of meetings, partly due to their expensive audio visual equipment and technology, but this isn’t expected to be the case for much longer.

“Over the next ten years, we will see a transformation which will be led by three key things: flexibility, ease of use and improved user experience, at a much more competitive price point. Until recently, it wasn’t uncommon for an enterprise to pay tens of thousands of pounds for a full conferencing system which required days to be fully installed. Now the technology is easier to install, we are seeing more requests for fitting huddle room-style spaces with a space-efficient plug-and-play device,” says Mr Landi.

Technology-obsessed millennials expect the latest and most efficient devices to be at their fingertips. According to Wainhouse Research, 55 per cent of younger workers have been pushing conferencing managers for more available video solutions in the workplace, alongside 75 per cent demanding more mobile solutions. Huddle rooms that are equipped with video-collaboration technology have the ability to connect in-office staff with mobile workers, wherever they are, through innovative devices. 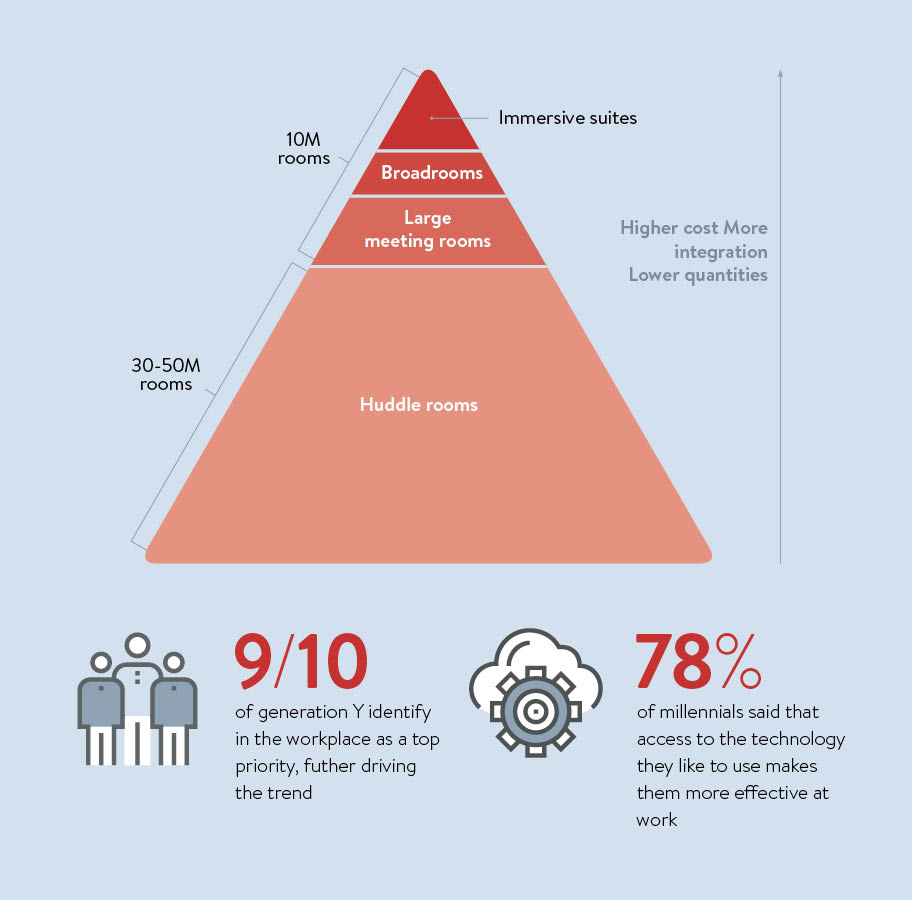 “I’ve got two millennial kids who work anywhere they feel comfortable, from using their laptop on the sofa to outside in the garden. In fact, 90 per cent of 15 to 35 year olds say that flexible working is important for them. These changes in the working environment make huddle rooms a must,” says Mr Landi.

However, it’s not just millennials who are making the most of this new-found freedom. “I’m 55 and don’t need a seat in my office or a desk to work. I travel every week, so I have experienced first-hand that work can be done in a lounge, airport café, train or taxi. I don’t need to go to an office to meet someone anymore,” he adds.

Equipment that makes any space a meeting space, no matter how small, is challenging the old way of doing business. Specialist devices, such as Polycom’s RealPresence Trio and RealPresence Centro, have been introduced to support this growing trend. At the most cutting edge is the Acoustic Beam technology that limits the unwelcome background noise on a conference call by utilising available microphones to pick up the speaker, and also detect and reduce extraneous noise.

Polycom has long been at the forefront of innovative video-conferencing solutions, but why does the company so strongly believe in huddle rooms? “The old way of working solely over a phone is disappearing. Collaboration in the future is going to be interaction through video, instant messaging, web-streaming and content-sharing in addition to audio, which are all tools that enable people to talk to each other better and to work in a much more open manner,” says Mr Landi.

Huddle rooms can be set up easily using new collaboration devices such as the RealPresence Trio, a smart hub specifically designed for the huddle rooms that allows users to share images, videos, presentations and more content easily and in seconds.

The recent innovations in technology are driving video proliferation further by allowing smaller huddle spaces to be created even in the larger rooms or open plan offices. With four multimedia screens and a 360-degree camera in the centre, RealPresence Centro allows viewers to collaborate more naturally and literally huddle around the device, as opposed to looking at a single distant screen. RealPresence Centro helps create a huddle space versus a huddle room as it can be fitted anywhere.

The prospects of huddle rooms may be considerable, but technophobes will need to be convinced, if these spaces can be truly collaborative environments. Mr Landi agrees: “The element that always puts off people is ease of use. If users do not find these rooms or technology simple to use, they will just use an old-style meeting space. It is extremely important that this technology is really intuitive and “idiot-proof”, with no training needed. The other element is the need to make this technology affordable.” If it costs the same amount of money or more to fit out a huddle room than is being paid for a conference room, no one is going to do it.

Whatever the reason may be for the renewed interest in huddle rooms, private areas in open and shared offices will be at a premium, with 46 per cent of employees saying noise levels are the most distracting issue in the office, according to research by Jabra. When technology is used to increase productivity and co-operation to create a dynamic work environment, huddle rooms will reach their full potential.

“We think collaboration is going to bring everyone together and that’s the way people will want to work. Once you’ve tried it, you will not want to go back,” Mr Landi concludes.