Connected staff, equipped with intuitive technology to improve co-ordination and collaboration, can stay ahead of the curve in a fast-moving digital world 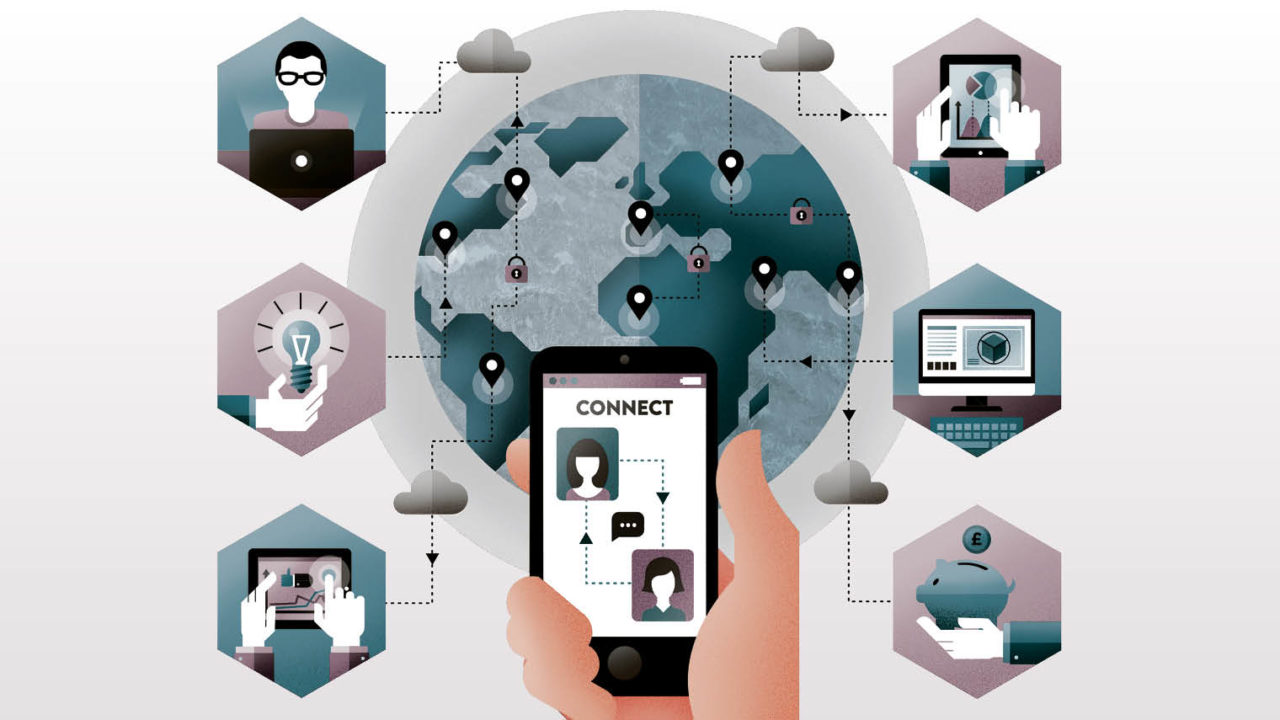 In 2016, a lot hinges on an organisation’s ability to move deftly. Being efficient, improving the customer experience and pre-empting market disruption depend on the ability to connect dynamically and regroup.

These are now the drivers for unified communication (UC) and collaboration. It is not about blindly equipping employees with technology, but empowering them to get the job done without fuss.

Rob Bamforth, a principal analyst at Quocirca, attended a collaboration conference in London recently, where a recurring theme was improving user adoption. James Tye, chief executive of Dennis Publishing, told of his decision to default to team communication tool Slack because of its immediacy compared to e-mail. Its use had been rising anyway, but now Mr Tye is driving it from the top of the business. “In the midst of all the possibilities, simplicity and ubiquity are key,” Mr Bamforth notes.

Businesses are also investing more in their workspaces to facilitate collaboration. Wainhouse Research estimates there are 40 million “huddle rooms” – small dedicated spaces for on-the-fly meetups – in use among companies globally. Technology must reflect that. Logitech, for example, is targeting huddle rooms with an inexpensive, portable, HD-quality video-conferencing camera.

Jabra transformed its working practices a few years ago. The headset manufacturer, which employs 1,000 people, removed all desk phones in favour of the UC platform Skype for Business (formerly Microsoft Lync). Communications are largely mobile now and speakerphones can turn any space into a meeting room. 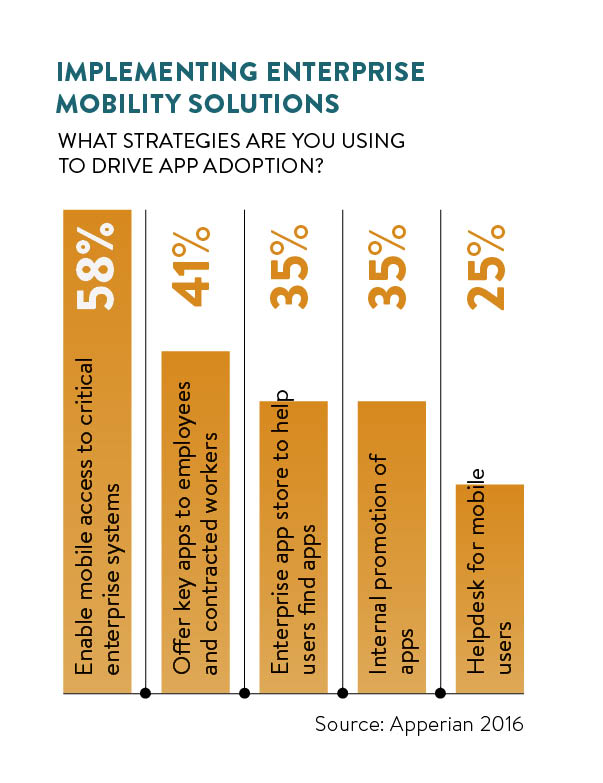 “The new set-up paid for itself in less than three months, removing the cost of fixed lines, reducing travel and boosting productivity,” says senior vice president Holger Reisinger. “More importantly, it reflects the way people want to work now – they can be at home with all of the capabilities of the office.”

For younger generations, such flexibility is assumed. It also enables companies to address gaps in their talent, effortlessly joining remote freelancers to workgroups.

Collaboration through the cloud

Ubiquitous high-speed connectivity, smart mobile devices and cloud-based applications are important enablers. “For years, businesses have put up with the pain and cost of disjointed communication systems,” says Ed Grant, co-founder of Solgari, an Irish UC startup. “Now end-users should be able to access whatever services they need through any internet device.”

Solgari provides free, browser-based video, voice, conference or chat via the cloud. “The cloud has changed everything,” Mr Grant says. It paves the way for any company to access the latest integrated capabilities, flexibly and affordably. Otherwise they become limited by proprietary systems, which third parties cannot easily connect into.

Modern collaboration should be inclusive, mobile and social, crossing company boundaries. “As more business applications and UC move to the cloud, it becomes far easier to ‘mash up’ services and make them available anywhere,” says Greg Zweig, director of solutions marketing at Genband, which facilitates this. “UC is moving to a model where multiple business applications are ‘communication-enabled’.”

The most advanced collaborators are organisations with a high percentage of knowledge workers, where the need for rapid access to expertise and information is highest. Smaller companies also tend to be ahead, with less legacy infrastructure and much to gain from improved productivity. 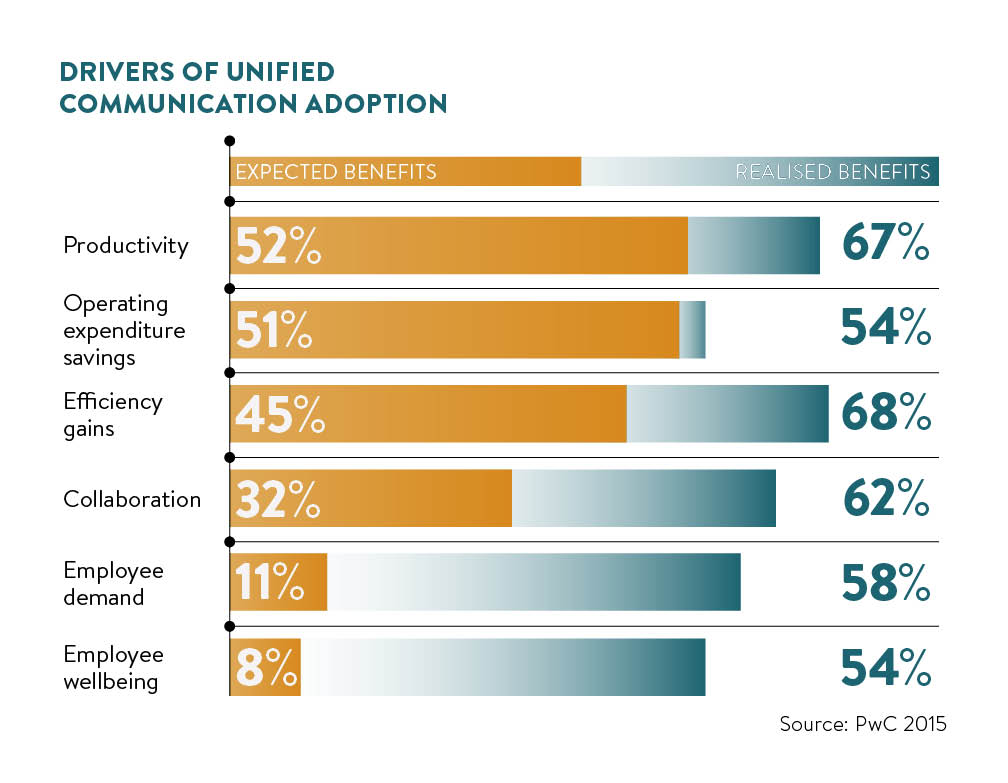 The gap could close though, as larger organisations lose their cloud inhibitions. Slack counts three-quarters of US Fortune 100 companies as users of its cloud-based software, as well as government agencies, law firms, advertising agencies, restaurants and non-profit organisations.

Estate agent Deighton McKenzie uses Slack to provide a better service to people selling their homes, collaborating and sharing documents related to viewings, questions and offers. Cosmetics firm Lush has reduced internal e-mail by 75 per cent since using it. It plans to pilot Slack in its stores next, to provide social media support and enable website issues to be flagged quickly to HQ.

Graham Bevington, president of Mitel’s Enterprise Division, notes that inter-organisation collaboration is becoming increasingly important. “Collaborative networks now connect doctors, pharmaceutical companies, patients and their families, to improve people’s health, while on university campuses in the US they are enabling faster co-ordination of security lockdowns when incidents threaten students’ safety,” he says.

Besides the danger of disruption, companies that lag their competitors risk frustrated employees using consumer tools such as WhatsApp for work. Research by cloud UC provider Fuze found 32 per cent of workers using messaging apps and 25 per cent making video calls without consent, something that will increase as younger employees enter the workplace, potentially exposing sensitive information through inadequately secured channels.

But first there is some catching up to do. “Education, government organisations and retail could benefit from increased investment,” says Sheryl Kingstone, research director at 451 Research. “Mid-sized companies experiencing a growth phase or managing multiple locations probably have the most to gain – once they understand a strong collaboration strategy is a competitive advantage.