We binge watch Netflix. Cringe at decade-old special effects. Demand dialogue and flair from games, thrills from cinema, production values from holiday videos. In short, we’re getting harder and harder to please.

Virtual reality will shock the systems of even the snobbiest armchair critics with something genuinely new and impossible to ignore. Remastered is about to take on a whole new meaning. 3D is cool again, essential even, just not quite how James Cameron imagined. Star Wars, Gran Turismo, Game of Thrones, Final Fantasy – all are getting the VR treatment in one form or another over the next 12 months, joining indie, made-for-VR films, games and everything in between.

Total 360-degree, 3D visuals, binaural sound that reacts to your head movements, haptic, gesture-based controllers that know the difference between a thumbs-up and a trigger finger. VR gaming will be intensely personal and private, uninterrupted by the outside world.

It will also be social and hyper-connected with avatars and facial recognition. But if there’s one thing VR offers, once the novelty wears off, it’s presence. Not just being immersed in a VR version of Final Fantasy XIV or Ubisoft’s Eagle Flight for Sony’s PlayStation VR, but feeling like you’re really somewhere else.

“I had stopped thinking about the thing on my face, about the technology. It was this really bad programmer art, these little spirals that went up into the fog. I was 100 per cent there – my brain couldn’t understand that I wasn’t there.” 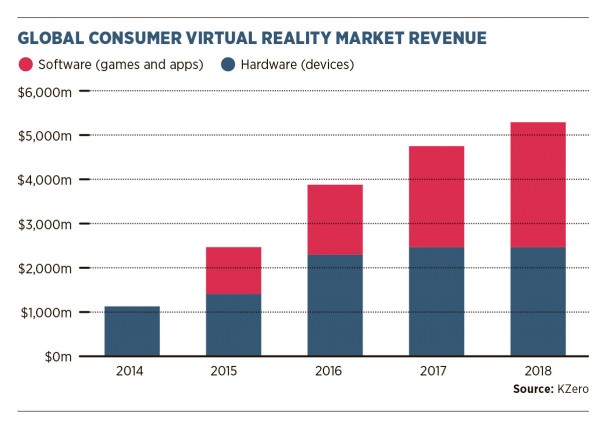 That’s Valve’s Chet Faliszek, the man who co-wrote the Portal and Half-Life series, and now works with VR developers, describing an early demo of the HTC Vive headset with Valve’s Lighthouse tech tracking his position and movements in the room. That was his VR moment.

Instead of catering only to FPS (first-person shooter) gaming fans, Mr Faliszek predicts VR will be more diverse than PC and console gaming as new groups take advantage of the slower rollout. “The tools are easier to use, we’re seeing more bespoke experiences for smaller, niche groups,” he says. “People underestimate use cases such as ‘I come home from work and just want to mellow out’. We don’t think one big piece of software is going to launch this, it’s going to be many pieces of software.”

Alongside reworkings, such as Rock Band VR and Ace Combat 7, entirely new games are taking advantage of the change in interaction to reach new audiences. Take Job Simulator, a fine example of future whimsy and launching on the three main platforms. Players reach out and grab virtual items in a kitchen or office, say, using movements intuitive enough your grandparents could master them.

“Players with less gaming experience are having a much easier time picking up and enjoying our game,” says Alex Schwartz, Job Simulator creator and founder of Owlchemy Labs. “There are multiple new genres of games that have not yet been invented but will emerge as a result of the new, more natural interaction methods of VR.”

It’s not all light, Wii-style fun, though. “We’ve been building something that takes advantage of room-scale VR in a pretty unique way,” says Denny Unger, chief executive and creative director of Cloudhead Games, makers of The Gallery: Call of the Starseed. “We hope that it’s a great ‘first-time’ experience for people looking for a deeper VR journey. People will interact and play together more deeply, not less, in VR because there’s a profound sense of shared presence.”

VR can also change how traditional gamers game. “In a 2D game, you eat up content really quickly,” says Mr Faliszek. “In virtual reality, you move slower, especially if you’re standing. That allows designers to slow down the amount of content that people go through and instead let them go deeper, let the game be denser.”

Elsewhere, short computer-generated films, such as Lost, directed by Saschka Unseld, ex-Pixar and head of Oculus Story Studio, and the upcoming Henry are more interactive than traditional movies, as their plots, sound and pacing react to headtracking and the viewer’s attention.

The user “plays” through the film, but the future of how to tell stories is being toyed with, manipulated, expanded and these experiments haven’t yet settled down into a recognisable form with, for instance, VR’s equivalent of a cut or close-up.

If cinema is a shared dream, this is a shared reality – in fact, millions of shared realities. Because VR as a medium won’t be limited to computer-generated animation. Thanks to one prolific studio, VRSE, documentaries outnumber short films on mobile VR. Soon, our own 180 or 360-degree videos will sit alongside big budget VR movies. And Facebook, which owns Oculus, is set to encourage this shift.

“For Facebook, it’s about delivering a completely immersive timeline,” says Ben Wood, chief of research at CCS Insight. “This will start with movie trailers, experiences inside cars and video postcards. User-generated content is only a matter of time. Say, I go on a trip of a lifetime to the Amazon rainforest. I record it, come home and share it on Facebook or YouTube. My friends can then have a full, immersive experience to ‘see what I saw’.”

Samsung can monitor which free and paid-for apps and games owners of the £80 Gear VR are actually using. It’s an accessible headset, but there are already some boundary-pushing apps. “Being able to stream live events in VR, especially sports events with the NextVR app, will be a game-changer in the coming years,” predicts Jason Lovell, Samsung UK’s senior product manager for wearables.

For all the talk of 2016 as a breakthrough year, Gear VR users can already get inside music videos or browse the web in solitude, game in a retro arcade or even chat and share links with friends’ avatars.

No other near-future tech is harder to describe fully with words. If nothing else, movie and game reviews are about to get trickier. As Valve’s Mr Faliszek advises, just get yourself inside a headset. “I was dismissive of VR until I had my moment. Try it, try one of the high-end systems coming out next year. Don’t be scared of thinking you don’t play a certain kind of game, just try it, whoever you are,” he says. “You just need to have that moment.”