Coupled with data from the internet of things, extended reality is changing the way people work and driving industrial innovation 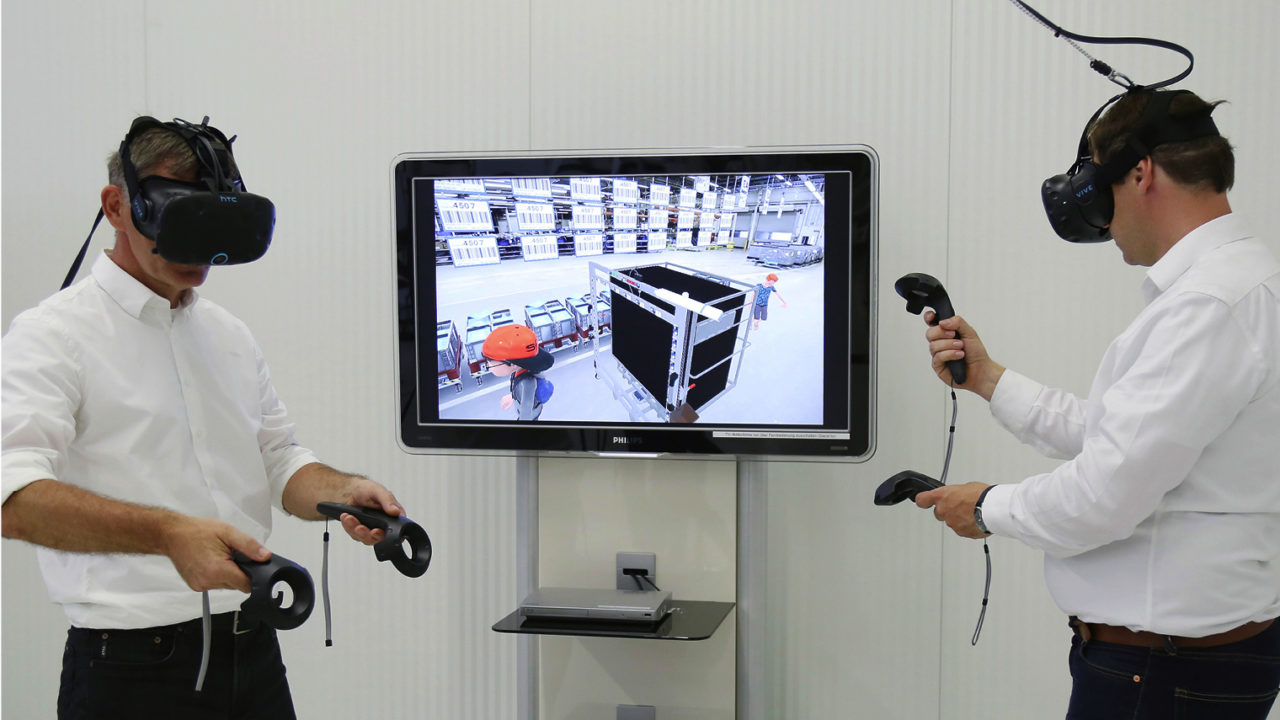 You’re carrying out maintenance work on a transmitter mast. In 2018, this could mean you’re already a connected field worker. Earlier this month, A1 Telekom Austria completed an eight-week pilot programme using the Vuzix M300 Smart Glasses to enable .maintenance experts to legally sign off on procedures and help on-site industrial technicians to rectify defects found in transmitter mast reviews.

With the “see-what-I-see” augmented reality (AR) software, remote assistance, and the ability to capture images and video, the whole servicing process can take less than 25 per cent of the time it would using traditional methods.

This is just one way extended reality (XR) could power what Professor Klaus Schwab, executive chairman of the World Economic Forum, and many others are referring to as the fourth industrial revolution. Smart sensors producing internet of things (IoT) data and advances in robotics are being combined with emerging technologies such as XR, which merge digital, physical and human elements to change industrial processes.

When everything in a factory or workplace is connected and producing data, XR can act as the missing piece, which brings real people and their expertise into the equation.

More important than any individual pilot announcement though are the companies that jumped on board early, got a head-start and saw the results they needed to move out of the trial phase into larger-scale deployment.

For organisations that have graduated from small-scale pilots to widespread adoption, the combination of XR and IoT is already changing the way people work. The industry regarded as the most mature in its adoption of XR devices is manufacturing with a number of others, including architecture, construction, logistics and healthcare, following its lead.

Take the Volkswagen Group. In 2016, it launched a series of virtual reality (VR) training pilots for production and logistics staff with Vive’s VR hardware and enterprise software startup Innoactive. Since then, it has seen “significant increases in efficiency and the effectiveness of our programmes”, says Dennis Abmeier, Volkswagen Group’s IT lead. Now it’s on track to train 10,000 employees in XR by the end of 2018 across Volkswagen, Audi, Seat, Skoda and VW Utility Vehicles, via its digital reality hub.

“To date, more than 30 simulations have been developed,” says Daniel Seidl, chief executive at Munich-based Innoactive. “The Vive and Vive Focus with their 6DoF controllers let people use their hands to practise commissioning parts and using barcode scanners. As people can access such virtual workplace simulations from anywhere, the real machines and operating materials can be operated around the clock. Furthermore, it saves travel and time.”

XR invaluable for training and testing in industrial sector

In addition, Volkswagen and also BMW, another early adopter in automotive, are seeing results from increased virtual prototyping and production line training in XR. Bringing intelligent robots into workplaces is a core part of this brave, new industrial revolution and XR is being used to build a bridge between human workers and robots.

“In a case like Volkswagen, they’re using robots, which are fairly expensive and take time to set up and configure,” says Hervé Fontaine, vice president of virtual reality B2B and business development at HTC Europe. “They usually get some parts of the production line just six weeks before it’s final and, if they train people with only a limited amount of equipment, then they can’t run on time. In VR, if you can model everything, then you can train everybody because you just multiply the training room.”

In aerospace, Airbus has been working towards its “factory of the future” model since the introduction of digital tracking and radio-frequency identification monitoring technologies back in 2014. Its current digital twin factory innovation is an example of a live application where real-time sensor data and XR meet. An Airbus factory in Spain was able to build a virtual model of the facility, known as a synced factory twin. This is complete with the same IoT data flow that feeds the real factory, and enables remote, virtual monitoring and control of large, complex aircraft construction. 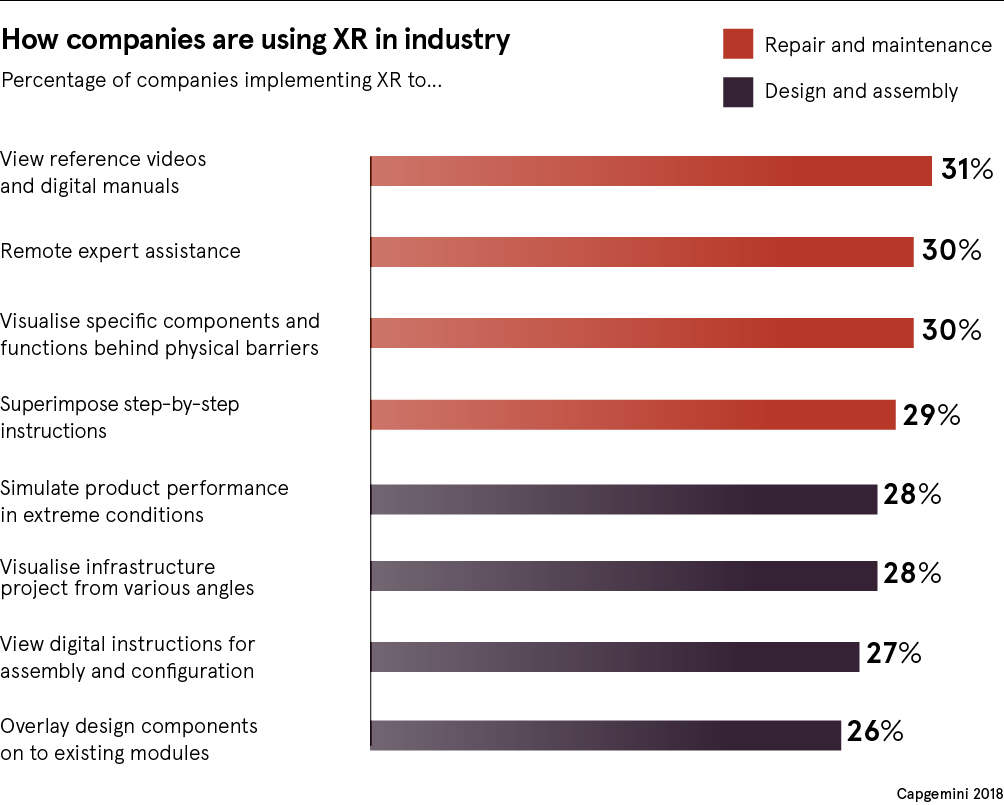 Further along in its XR and IoT journey is DHL Supply Chain with its vision picking smartglasses. According to CCS Insight’s November 2018 VR and AR Devices Worldwide Forecast, just 66,000 AR devices will be sold by the end of 2018, “practically all of those to enterprise”. Growth is relatively slow, but interest from industry “remains solid” and CCS expects sales volumes to pick up in the early-2020s.

DHL’s first pilots on AR and logistics date back to 2015 and have used hardware such as the Google Glass: Enterprise Edition, which is rumoured to be getting a second generation model soon, and Vuzix’s M100 and M300 Smart Glasses. Trials in the United States, Asia and Australia, using Ubimax’s xPick software, cut on-boarding and training times in half and showed average increases in unit picking productivity between 10 and 25 per cent.

Based on this success, DHL announced in August 2017 that it was extending use of the smartglasses to warehouses around the world, and the technology remains in use alongside radio-frequency scanners, Bluetooth wearable rings and robotic pickers. In cases like these, battery life and sufficiently rugged designs are ongoing challenges. Looking to the near future though, vision recognition, which allows applications such as virtual pick to light, is the next key feature that will enable XR glasses to drive further optimisation in logistics.

Many companies in this wave of early adopters are also now looking to XR applications tailored to other specific problems. For instance, beyond picking, DHL is exploring worker training with AR smartglasses and Audi has experimented with VR marketing experiences.

Even in cases where a company has found one brilliant solution, the scale and impact can be considerable. Colas, the European road and rail infrastructure supplier, has made Immersive Factory’s VR safety training software, running on Vive headsets, part of its safety culture induction programme. That’s a long way from experimental pilots.