Repel the hordes of hackers

The scale of malware threats is more than growing – it is exploding.

In 2014 nearly six million malware strains were identified.1  There have been 1,800 new distinct families of viruses detected in the past year alone.2 Kaspersky Labs identified 12,100 new Trojans in mobile banking, up nine fold on the year before.

The cost of a breach is huge – latest figures put the average value at $3.79 million.3

The message is clear: you have to do everything you can to protect your organisation and customers.

Most companies take the old-fashioned approach to security. This involves anti-virus software, a firewall and intrusion detection. But with attacks increasing at this rate it simply won’t cut it. Intruders will find their way in sooner or later.

Fortunately there is another approach. Move to a secure network and the vast majority of threats can be neutralised before they get anywhere near your firewall.

“The analogy we use is home security,” says Kathy Schneider, Level 3 senior vice president product and marketing in Europe, the Middle East and Africa. “Do you want criminals at your door, looking through your peep-hole? Or do you want them kept as far away as possible?”

Level 3 introduces four new elements to security. The first is prediction. Level 3 monitors its global network to know where malware is coming from and which patterns are emerging. It’s not easy work. Analysts at the Level 3 intelligence laboratory monitor 1.3 billion security events a day, witnessing more than one million malicious packets, in order to make accurate predictions.

The second element is detection. The insights gleaned from monitoring the network mean Level 3 can spot sophisticated attacks and find the best ways to stop them.

Third is alerting customers. Level 3 will notify customers of key threats and provide a summary of what action has been taken to defeat them. Any requirement for further action can be decided.

And last is the extra element of security which is introduced by using a rigorously policed network. Data is scrubbed before it gets anywhere near the corporate firewall. This multi-layered approach is proven to reduce the chances of viruses, Trojans, spyware or any other malware from slipping through. 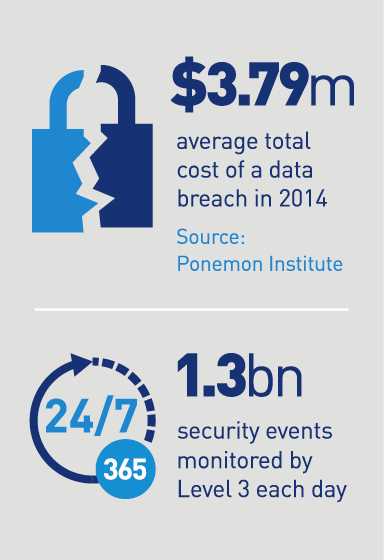 “Security used to be about repelling a handful of unsavoury characters from your corporate data,” says Ms Schneider. “Now it’s like a horde of barbarians running at you.”

The threat escalation means many chief information officers (CIOs) can’t handle the issue alone. CIOs are already having to run their business-as-usual operations with flat or reduced budgets, while figuring out how to deliver innovation. This makes it hard to also build an expertise in security – a challenge that’s constantly growing and changing.

“CIOs are having to decide if they want to focus on innovating for their business model, product and customers, or on becoming a security expert. Put like that it really makes sense to move to a secure managed network,” says Ms Schneider.

Switching is quick. A DDoS mitigation service by Level 3 can be implemented within 24 hours. Other services can be adopted when needed, including a full outsourced security service.

Ms Schneider concludes: “My message to CIOs is to ask your current security provider if they are monitoring and cleaning traffic at the network layer? Do they have an intelligence lab predicting global threats around the clock? Are they tracking a thousand malware command-and-control centres. If not, then we’d love to speak with you about Level 3’s capabilities.”

To find out more visit level3.eu.com/emeasecurityuk