What datacentres are doing to the world’s water supply

Datacentres are a crucial part of modern infrastructure, particularly as the global population moves their lives online, from work to play. But datacentres’ environmental impact threatens to degrade and devastate their locations.

According to the latest US research, datacentres could produce up to 14 per cent of the world’s carbon emissions by 2040. But simply operating a datacentre also requires an enormous amount of water which, when depleting local supplies, can become a difficult issue for surrounding regions.

In August 2019, Google announced proposals to build facilities in the desert region of Arizona and inked plans with the local water supplier to guarantee it one million gallons of water a day to cool the facility. At peak times this could rise to four million gallons daily. To put these figures into perspective, the typical household in Arizona uses up to 15,000 gallons in a whole month, according to the Arizona Municipal Water Users’ Association.

In April, a legal filing in Red Hill, Texas showed Google wanted as much as 1.46 billion gallons of water a year for a new datacentre by 2021. This, according to the Texas Water Development Board, would represent a significant increase in the surrounding region’s overall annual supply.

But why do datacentres require so much water? The basic premise is that using cloud storage leads to activity in the servers, which generates physical heat as a result of the amount of energy used. As the temperature increases, servers may slow down or malfunction, which is where cooling towers use the process of adiabatic cooling – evaporating water to remove heat –to keep processes running smoothly.

“A datacentre’s job is to provide raw material: convert information into useful data and the by-product is heat,” explains Tate Cantrell, chief technology officer at Verne Global, a datacentre company based in Iceland. “What we want to do is get rid of the heat, so the server can cool and last for a long time.”

As demand for these services increases – whether that’s more people using Instagram every day or masses of working people having meetings online – more CPUs and cores are also packed into data centres. In terms of data centres environmental impact, this leads to server densities and the water supply necessary to cool these systems increases as well.

“It’s very clear that from the standpoint of society and technology, we need real action,” says Cantrell.

But efforts to reduce water usage are underway at many companies. Facebook’s environmental report in 2018 detailed its method of using air from outside a datacentre in its cooling towers. The air, at the right conditions, enters the datacentre, warms up as a result of the heat generated and then is recirculated or exhausted outside. The method enabled the social media giant to cut its datacentre water usage in half.

It’s very clear that from the standpoint of society and technology, we need real action

Microsoft is trying the radical approach of building a datacentre underwater off the coast of the Orkney Islands, taking advantage of the cooler sea temperatures to cool its servers. While the plan, dubbed Project Natick, is still in phase two of a feasibility study, the data storage facility has been up and running since mid-2018 and is being used by 18 different departments at Microsoft.

In Atlanta, Google is using wastewater, unfit for consumption by humans or animals, to minimise its datacentres’ environmental impact on local drinking water supplies. Meanwhile, loop systems, where the same water is evaporated, condensed and then reused, have been incorporated into many datacentres worldwide.

CyrusOne, a real estate investment company, in March announced that its Arizona datacentre was “net water positive” through an air-cooled chilling system. It also partnered with a local organisation that worked on issues around water supply to restore water flows in excess of the amount the datacentre used in 2019.

How the right location can save water

Other companies have made unorthodox choices when it comes to location. Nautilus Data Technologies built a datacentre on a yacht, which floats off the coast of California and uses ocean water to coo its servers, while Facebook owns a 27,000-square-metre facility in northern Sweden, close to the Arctic Circle.

Verne Global set up shop in the Icelandic town of Keflavik because of its existing industrial infrastructure. Iceland’s electricity and heat supply is 100 per cent renewable and the year-round monthly average temperature ranges between -1C and 10C. 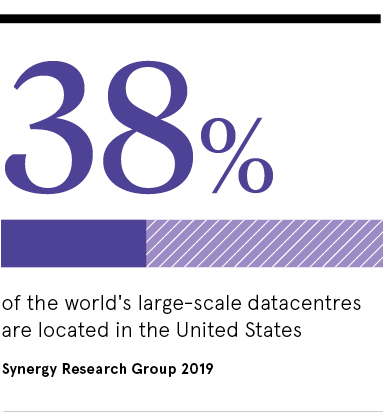 “We started Verne Global because we wanted to be an example of how a datacentre could promote proper climate action,” says Cantrell. “We were able to take advantage of being positioned in Iceland in the datacentre design.”

Building datacentres in places with lower temperatures can be effective in mitigating their environmental impact, though location can only go so far in reducing energy consumption. To maintain an expected service level and cope with demand, datacentres can’t always be in remote locations.

But even datacentres located near cities can reduce their water usage. Equinix, a global data platform company, has a Toronto-based facility which draws cold water from Lake Ontario, a local water source that isn’t used for drinking water.

David Watkins, solutions director at VIRTUS, a datacentre operator with four sites in and around London, points out that all datacentres often operate 24 hours a day. “The UK has a temperate climate, especially overnight, and we’re not taking water from the main supply,” he says. “We can use ambient conditions, without mechanical cooling, to chill the air, and we use what heat we can, before it cools down, for example heating parts of the datacentre where people work.”

As pressure grows on the world’s datacentres, the industry is facing a high stakes stress test, but solutions to mitigate datacentres’ environmental impact are becoming more widespread. With the right information and sufficient impetus within companies, datacentres could yet demonstrate that an interconnected world doesn’t have to come at the expense of the environment.