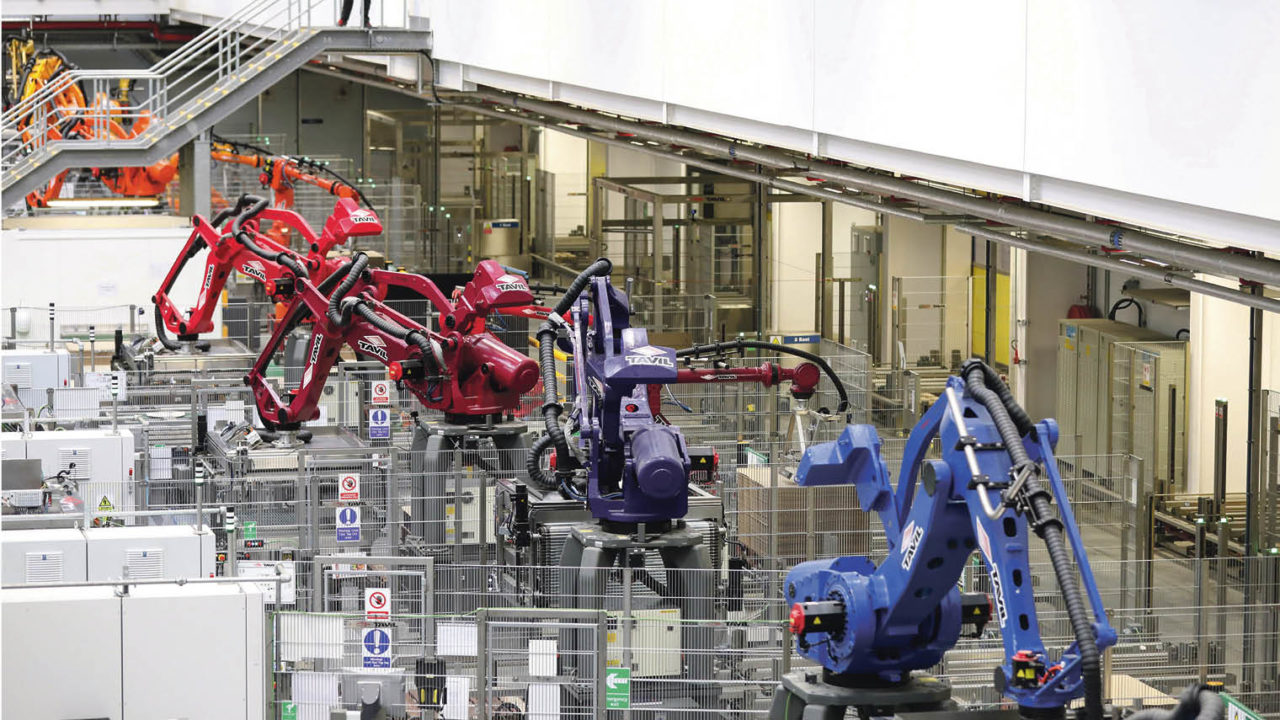 According to a 2017 report from PwC, 2018 marks the year artificial intelligence (AI) can finally be applied widely. The report warned that 30 per cent of the country’s jobs might be under threat from the technology, but predicted the UK could see productivity boosted by up to 30 per cent and savings generated of up to 25 per cent.

Steering the right path forward is going to be hugely complicated, although Greg Clark, Secretary of State for Business, Energy and Industrial Strategy, and the minister in charge of the UK government’s AI strategy, is resolutely upbeat.

“We are at the cusp of one of the most exciting times in our lives and, if we get our strategy for AI right, then the UK will be able to reap the rewards for our economy for decades to come,” he argues. “To secure the huge potential of AI, we need to be strategic and focused, recognising the increasing convergence of technologies and focusing on the areas where we can compete globally.”

We are at the cusp of one of the most exciting times in our lives and, if we get our strategy for AI right, then the UK will be able to reap the rewards

Industry is aware of the size of the problem. Demis Hassabis, chief executive of AI pioneer DeepMind, has spoken of creating an “Apollo programme for the 21st century” on AI. Mr Clark agrees that’s the kind of ambition and investment needed, if the AI industry is to generate his hoped for £232 billion for the British economy by 2030, although he’s fighting shy of the $110 billion required to fund the Apollo Moon shot.

“I want the UK to lead from the front, to help our world-leading businesses exploit the potential of AI, encourage companies to engage and grasp the opportunities ahead,” he says. “There is no doubt that machine-learning and AI are already improving peoples’ lives, from intelligent personal assistants that can prepare us for changes in the weather, to systems that protect our money from criminals, or devices offering medical advice from the comfort of our own home. We know the challenge lies in harnessing technology.”

In April, Mr Clark launched the UK’s AI Sector Deal policy paper, responding to a report on the UK’s AI industry by Professor Dame Wendy Hall from the University of Southampton and Jerome Pesenti, Facebook’s vice president for AI. Professor Hall and Mr Pesenti concluded: “The UK could stay among the world leaders in AI in the future or allow other countries to dominate. We start from a good position in many respects, but other leading countries are devoting significant resources. The UK will need to act in key areas and to sustain action over a long period, and across industry sectors, to retain its world-leading status, and to grow our AI capability as well as deploying it much more widely.”

The AI Sector Deal puts many of Professor Hall and Mr Pesenti’s suggestions into action, such as a fresh package of almost £1 billion in support of the sector, including new government, industry and academic contributions up to £603 million, up to £342 million from existing budgets, and £250 million for connected and autonomous vehicles. It also aims to invest £400 million into maths, digital and technical education to address the shortage of STEM (science, technology, engineering and mathematics) skills.

Launching the strategy, Mr Clark stressed: “It’s evident that Britain is a place that people want to come to for AI. We have a position of strength that we want to capitalise on because, if we don’t build on it, the other countries around the world would steal a march.”

With the AI minister pushing for a post-Brexit customs partnership between the UK and the European Union, it’s notable that the new strategy includes a slight relaxing of immigration rules. The likes of Facebook and Google are opening huge new offices in the capital and promising to create thousands of jobs, but a third of tech founders reported they had already lost out on potential international hires due to Brexit, according to a survey released by Tech London Advocates last November.

With the UK tech sector vociferous in its pro-immigration views, warning that the country has a dire shortage of digital skills in programming and statistical analysis as well as AI and machine-learning, Mr Clark’s plan is to double the number of exceptional talent visas issued every year. These new visas to attract AI researchers, revised immigration rules for those considered as having exceptional talent, making it easier to apply for settlement after three years, and quicker routes for skilled students to work in the UK after finishing their degrees suggest the government has been listening.

“Creating an economy that harnesses AI and big data is one of the great opportunities of our age,” he adds. “AI is fundamental to our industrial strategy, so alongside the nearly £1 billion of support for the sector, we’re issuing an AI Grand Challenge to put the UK at the forefront of the revolution. Utilising AI could have a dramatic impact on our economy, but to realise all the social and economic benefits of AI, we know we need a strong partnership between business, academia and government.”

He cites recent “votes of confidence” in the UK’s AI environment. “Global Brain, one of the largest venture capital firms in Japan with $700 million under management, is opening its first European HQ in the UK,” he points out. “And it’s not just the established players; Kwiziq, Cleo and Mindtrace are examples of UK AI startups leading the way in areas as diverse as education, personal finance and autonomous vehicles.

“We have already seen QuantumBlack, a British tech company using machine-learning and AI ‘in the wild’ to help clients in the government, corporate and third sectors increase their performance. QuantumBlack has grown from its early days in Formula 1 racing, where the three founders met, to 350 technology experts in the UK head office and also in Boston, India and Australia. I want to see this success replicated across the industry.” 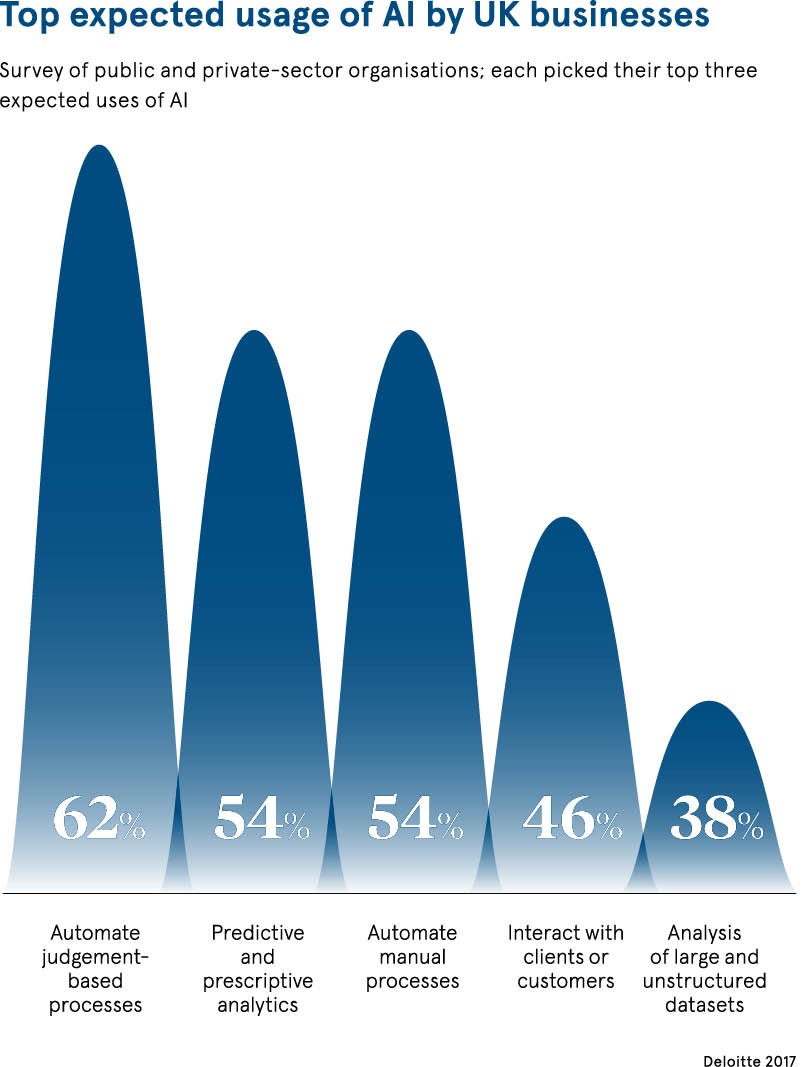 UK business and academia working together on AI-related research

In terms of specific industry or business advice, he offers big-picture thinking of industry and academia working together with the University of Edinburgh spinning out Skyscanner, BT opening a £29-million R&D facility in Belfast with Ulster University, and Welsh company IQE joining Cardiff University to develop a compound semiconductor cluster in the area.

Asked about ways for business to embrace AI, he argues: “Businesses have committed to supporting AI-related research and development to help boost productivity across our economy. Major established companies in the tech sector, but also increasingly beyond, are using AI to tune up their operations and services.”