Innovations in the materials now being used and digital technology, partly driven by environmental concerns, are pushing packaging forward

At its heart, food and beverage packaging has to be attractive, functional and durable. But with awareness growing around the environmental impact of sending food and packaging waste to landfill, the onus is increasingly on suppliers to ensure that packaging solutions are also sustainable and optimise resources efficiently.

Green is the new black

“Now, more than ever in the packaging industry, green is the new black and businesses are focusing increasingly on their carbon-cutting credentials. The packaging industry has to respond to that,” says Eric Collins, managing director of Nampak Plastics Europe.

One response has been through the development of packaging that extends the shelf life of food, thereby reducing the chances of it being thrown away by food retailers or households.

Notable innovations in this area include thermal bags that preserve the quality of fresh meats by protecting them from temperature changes, and packaging which employs high pressure techniques to hermetically seal the produce, preventing oxygen and water vapour from getting in and thus extending the shelf life of foods such as fresh fish by up to 20 days.

Other packaging suppliers are focused on designing processes or materials that reduce contamination in the recycling stream by, for example, creating secure seals for ready meals that can be removed in the hot wash process employed by recycling companies, thereby allowing the entire PET plastic tray to be recycled, or developing films that are themselves fully biodegradable.

Although recycling rates have risen steadily in the UK in recent decades, thanks to public awareness campaigns and greater use of recyclable materials in packaging, there are certain pockets of the food sector where packaging is still most likely to end up in landfill. One such area is disposable cups, which have attracted negative attention from campaigners for their lack of recyclability through normal waste collection services.

In a bid to find a solution to the problem, environmental packaging specialist Biopac has launched “I’m a green cup”, a single-serve cup lined with a starch material which makes it 100 per cent compostable, aimed at food businesses that want to demonstrate their commitment to the environment.

Convenience at the core

Convenience is another major selling point for food packaging manufacturers and a key driver of innovation. “Whether it is portion control, food on the go, easy handling or microwavable, consumers are increasingly seeking out products that cater to their on-the-go lifestyles,” says Nick Smith, managing director of packaging supplier Parkside.

Nampak’s Mr Collins cites laundry care products as a fast-moving consumer goods category where creative packaging has positively influenced buying behaviour. “Added-value functions such as ‘controlled dosing’, which helps cut down on wastage, have been really well received by customers and is contributing to sales growth in the market,” he says. 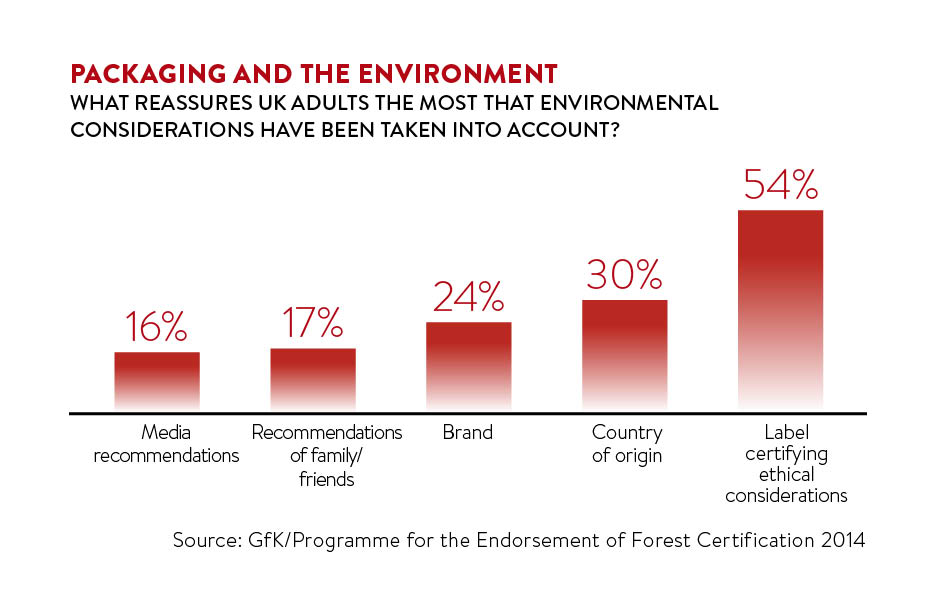 Oven ready roast-in-the-bag packaging for poultry, which uses a polyester base film with oven-proof inks, is another innovation that has been developed with consumer convenience in mind. “Poultry tended to be sold on trays with a stretch overwrap, often resulting in leaking packs, which pose a food-safety risk,” says Stephanie Poole, convenience foods sales specialist at Sealed Air.

Looking beyond material innovations, digital technologies are increasingly being incorporated into food and drink packaging to enhance the shopper experience.

Scottish firm Insignia Technologies has developed a “smart” label that it believes has the potential to replace the often confusing use-by or best-before date stamps found on food products around the world. Once a package is opened, an intelligent label embedded on the inside of the product sets off a timer, which responds with a colour change from yellow to purple as the product’s freshness deteriorates.

Food brands are also using digital packaging technologies to engage and inform their customers. Italian pasta brand Barilla has been working in partnership with the software giant Cisco to develop a platform whereby shoppers can scan a QR code on the back of selected Barilla products, which allows them to track and trace the journey of their pasta all the way from the wheat field to the supermarket shelf.

The technology behind QR codes has been around for some time, but there remains a feeling that their potential has yet to be fully realised in the UK food and drink sector.

“QR codes are ubiquitous in China, South Korea and other parts of Asia, and are used for sophisticated transactions and personalised interactions. However, they are used much less widely and well in Western markets,” says Andy Hobsbawm, co-founder and chief marketing officer at smart products platform EVRYTHNG.

“We’re familiar with QR codes on our boarding passes and train tickets, but a lack of imagination in how to use QR codes for marketing meant consumers were turned off because there was never much value in scanning beyond linking to a website,” he says.

But Mr Hobsbawm believes there is potential for QR codes to provide a valuable function in the food and drink industry by serving up personalised, “in the moment” experiences to consumers in the form of loyalty rewards, personalised offers or provenance information. Further proof, as if it were needed, that there’s much more to modern food and beverage packaging than meets than eye.