BYOD or bring your own device has become well known among enterprise IT buyers thanks to the fast-moving consumer technology market, which ensures employees now own better smartphones than their workplaces can provide.

If you don’t secure it and make it policy, it’s going to happen anyway – this has been the lesson learnt. People are no longer willing to put up with cumbersome tech given to them by their employer and will figure out so-called workarounds using their own equipment if left with no other option.

However, BYOD isn’t just about smartphones. If you’re just thinking about it at that level, you’ve missed the point. It’s about enabling your workforce to work wherever they want, using whatever devices they like, allowing them to access data via cloud apps and using collaboration tools which don’t require them to be on-site.

It’s about enabling staff to take control of their working life and allowing them to break down organisational silos. Microsoft’s chief envisioning officer Dave Coplin explains the impact this can have on employees and companies. “The freer the information can flow within an organisation, the better informed and more agile the organisation is. When you break information out of silos and you allow people to collaborate more freely – that’s a great thing,” says Mr Coplin. 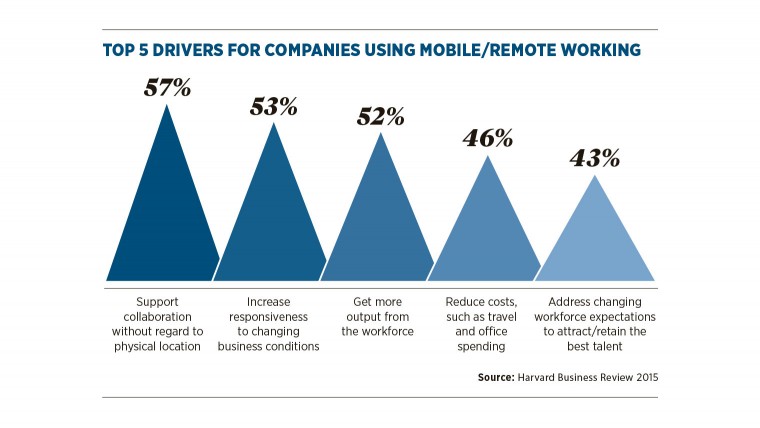 “People intuitively know this works because they are doing it in their personal lives on social media. When you use social media, your starting position is to share by default. You are empowering the individual to become more engaged at work – you are giving them access to more information at work.

“You are saying I know you’ve got your day job, but if there are other areas of the business you can add value or want to get involved in, go do it. That’s a very human thing – all of a sudden I start to feel a bit more valued.”

O2’s enterprise division carried out some research this year with YouGov, which found that if British companies fail to take advantage of the “anywhere office”, it could cost them as much as a combined 6.6 million hours a week or £1.6 billion. And yet just 48 per cent of businesses have integrated digital into their business strategy, which means that opportunities for employees to work better are being lost at more than half of companies in the UK.

Ben Dowd, O2 business director, concedes this new approach to working can present challenges. “We absolutely see that getting the right technology in front of people can drive significant benefits for businesses. But BYOD can be a complex process for any business; it can be daunting to select the devices, as well as the right tools and technologies to manage devices that the company does not own,” says Mr Dowd.

However, it’s not something that can be ignored. Why? Because the demographic within organisations is changing at a rapid rate and the younger generation in particular will not be willing to settle for rigid work structures, when their personal communications are free and flexible. Millennials or Generation Y need to be considered, according to Paul Trulove, vice president at identity and access management provider Sailpoint.

“I met with a customer last week whose chief security officer had done a study to understand better the user community he was trying to secure. And what he found was that 60 per cent of his new hires are millennials and those younger workers coming into the enterprise have radically different expectations of what they can do with corporate applications and data,” says Mr Trulove.

“They were accelerating their BYOD programme in order to help the recruiting and retention process with some of those workers. The reality is that if you don’t, they end up finding workarounds that are even more insecure.”

Reaping the benefits of BYOD

The organisations that have been able to adopt BYOD, cloud-based apps and flexible working are already reaping the benefits. Gatwick Airport, for example, has been running its BYOD policy for more than two years. Once an organisation that insisted its employees use BlackBerry devices, it now gives employees a monthly allowance, and urges them to go out and choose whatever devices they see fit for their job.

Kate Bowman, Gatwick head of human resources, explains that as well as reducing the demand for IT support, as employees now go to their device providers if there are any problems, the policy has enabled staff to get more out of their working day and has increased their IT capabilities.

“There has definitely been an increase in the overall levels of IT literacy in the organisation. People are becoming far more comfortable with the usage of mobile devices for their day-to-day activity. We have become much more paperless in the organisation, far more instant in our ability to respond to each other and our customers,” says Ms Bowman.

“We only had 300 people with mobile devices supported internally initially; we’ve got over 2,000 now. We only have 2,500 employees. This is also 24/7, so people can use it for communication; they can use it to access data about themselves and about the organisation at a time when they want to do that.

“If they don’t want to do that during the course of the working day, they can do it within the comfort of their own home.”

Wahanda, a European online marketplace and booking platform for beauty appointments, has experienced rapid growth over the past two years, and mobility and cloud-based apps have enabled it to scale without the growing pains that come with on-premise and traditional IT.

“In the past 18 months we have gone from being a relatively small UK-based business to being a company of about 450 people operating in a number of markets. We have acquired five different businesses in the last year,” says Wahanda chief technology officer Simon Lambert.

“With all that growth comes all of those challenges around corporate infrastructure and intra-team communication. During this time we have chosen a lot of cloud-based solutions to ease that process, such as using Salesforce to mobilise and connect our sales team.

“If we had used a lot of traditional tools and built lots of stuff ourselves, there is just no way we could experience this level of growth in that short period of time. It allows you to move very, very quickly.”

Adjusting to a new way of working

Although BYOD is becoming more widely adopted across enterprises, that doesn’t meant it doesn’t come without challenges. For example, Gatwick’s Ms Bowman says that with hindsight she would have liked to have communicated the benefits more clearly to employees from the start.

“Communicating it well is critical because it is a change. People may not recognise that it’s not just a new IT process or a new way of working; it’s actually a fundamental change to the way individuals are operating in an organisation. You have to think about the impact on them, and on their way of thinking and their way of operating in the organisation.

“There will be scepticism this is just a commercial benefit to the organisation – it’s important to hone in on how it can make their lives at work easier; how it can support them to communicate more effectively with each other, how it can speed up the way they access information and how it can improve their ways of working.”

And an organisation has to change its expectations too; it’s not just about employees. Microsoft’s Mr Coplin hopes in the future, when companies adopt these “working everywhere” strategies, they realise it allows them to judge employees on the outcomes of their work.

“The challenge we have is that organisations typically measure people’s performance based on the process they complete. Whether it’s in terms of hours worked or forms filled, which actually prevents you getting to the benefit the technology has to offer,” he says.

“What you have to do instead is go to a much more nebulous world of measuring the outcome of work, rather than the process. For example, Microsoft measures me on whether my projects are delivered on time, whether my customers are deliriously happy. Microsoft doesn’t care where I am or when I work, but it will have a stern word with me if I fail on the outcome. That’s a very different world where we have come from.”