The UK beer industry has experienced rapid growth in recent years, thanks to a booming craft brewery sector. But despite this, four brewing giants – Anheuser-Busch InBev, Heineken, Carlsberg and Molson Coors – produce a sobering 88 per cent of all the beer drunk in the UK.

While most of their water stewardship programmes are focused on more water-stressed areas of the world, water efficiency in their UK operations is also a priority. Heineken, for instance, with breweries in Manchester, Tadcaster and Hereford, cut water use by 3 per cent during 2016-17, and looked beyond the brewery walls to the way in which their beer is dispensed.

Their SmartDispense system reduces the frequency of beer line cleaning, cutting water and chemical use by 75 per cent, and in 2016 the company estimates water saved amounted to 35 million pints.

Making beer is a very water intensive process, so wherever we can lessen the impact and use less, it helps brewers save some money, and helps the environment too

UK independent brewers ahead of the curve

The rest of the UK’s beer comes from imports and around 2,500 independent breweries, from famous names such as Shepherd Neames, Marston’s and Adnams, to a wealth of new craft breweries and those producing just a few barrels a year.

“British independent brewers are some of the most innovative, environmentally-conscious business owners around,” says James Calder, head of public affairs at the Society of Independent Brewers.

“There are examples all over the country of breweries using reed bed filtration systems, waste water to irrigate crops, grey water to clean equipment and steam capture systems from the boil.

“Making beer is a very water-intensive process, so wherever we can lessen the impact and use less, it helps brewers save some money, and helps the environment too.”

Every brewery has numerous opportunities for greater water efficiency

When it comes to water efficiency, the water-use ratio is king. This is the total amount of water it takes to make a pint of beer and historically stood at around 10:1. While many of the really small breweries still hover around the 8:1 mark, large global brewers now claim around 4:1, while Adnams’ latest figure is closer to 3:1.

With its steaming tanks and bubbling vessels, there seem to be opportunities to increase water efficiency at every turn inside a brewery. Recapturing steam and condensation are two, another is limiting losses to evaporation by strictly controlling how long beer is boiled.  “Just shaving 1 per cent off an evaporation rate of 5 per cent is a major saving,” says Ben Orchard, environmental sustainability manager at Adnams.

But it’s the perpetual cleaning where water efficiency in beer making can really be achieved.

“Most brewers spend about 90 per cent of their time cleaning,” says John Conod, front of house manager at Purity Brewing Company in Warwickshire. “To make good beer, you need really clean kit.”

Purity uses a clean-in-place system, with tanks and vessels cleaning themselves, rinsing away detergents and caustics. “There’s no one going round with a hose pipe swishing water around,” says Mr Conod. 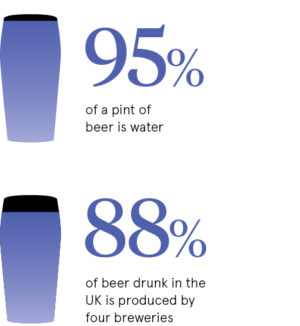 The systems have their own pH sensors and once the rinse water tests neutral, the machine automatically stops, cutting out the need for further rinses.

Adnams also use peracetic acid, a food-grade chemical, as a cleaning agent. As well as being fast acting, it doesn’t foam and once applied breaks down into harmless by-products, which require minimal rinsing.

“It’s a combination of these things which is ultimately how we can get to the low ratio,” says Mr Orchard, who believes that while it may be a case that the bigger the brewer, the greater the water efficiency, smaller breweries have the flexibility to be more innovative.

Getting more mileage from wastewater

Farr Brew is a micro-brewery in Hertfordshire, where wastewater, rich in biodegradable materials and nitrogen, is now used by a local farmer as fertiliser, rather than being taken away by a waste company.

Some small brewers, such as Purity and Staffordshire-based Freedom, have also developed their own wetlands as a way of dealing with wastewater.

Freedom also draws water from its own bore hole and any that doesn’t leave as beer is channelled into a wetland water treatment system, which relies entirely on sedimentation and filtration. It first flows into an aerobic digestion pond, then through three swale ditches, before running into another, large aerobic digestion pond. Next it passes through a reed bed and a final ditch before returning into the nearby brook.

“We are using entirely natural processes,” says Freedom’s head brewer Jonathan Smith. “The water that we are using and then reprocessing is able to return into the environment less than half a mile from where we took it out of the ground.” 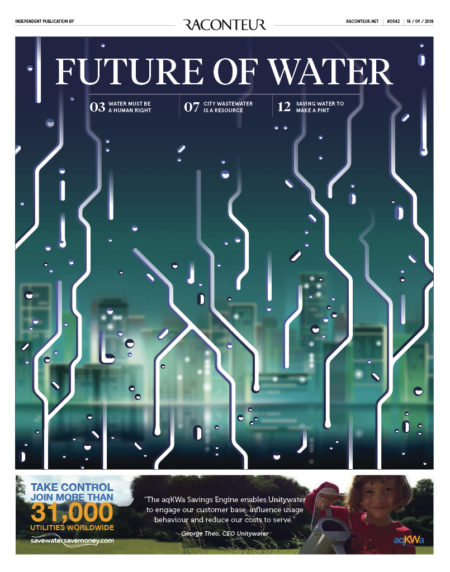