Impact investing faces a global challenge as it evolves to tackle some of the world’s most pressing problems – how to turn billions of dollars into the trillions required to mitigate social or environmental issues. World leaders adopted 17 United Nations sustainable development goals (SDGs) in 2015, which set ambitious objectives for all countries, rich and poor, on global issues, including poverty reduction, climate action, and affordable and clean energy.

The amount required to finance this is staggering. Although donor and philanthropic funds currently account for billions of dollars in support, the cost of solving the most critical global problems is an order of magnitude more.

The UN estimates that, based on current fund flows from the global north to the south, there is an estimated $2.5-trillion annual funding gap to achieve the SDGs in developing countries. Take into consideration all global markets and the cost could reach $90 trillion by 2030, it says.

Donor and philanthropic funds are unlikely to fill this shortfall, which is why growing emphasis is being placed on the role of private capital in financing the SDGs via impact investments as around 80 per cent of the money needed is expected to come from private investors.

In turn, international financial centres, which already handle around $1.4 trillion of investment flow, based on Investment Consulting Associates’ estimates, are repositioning themselves to serve the SDG agenda.

Given they are already go-to specialist conduits for global, cross-border investment, including to emerging markets, there is a significant opportunity for IFCs to expand their role as social or environmental issues 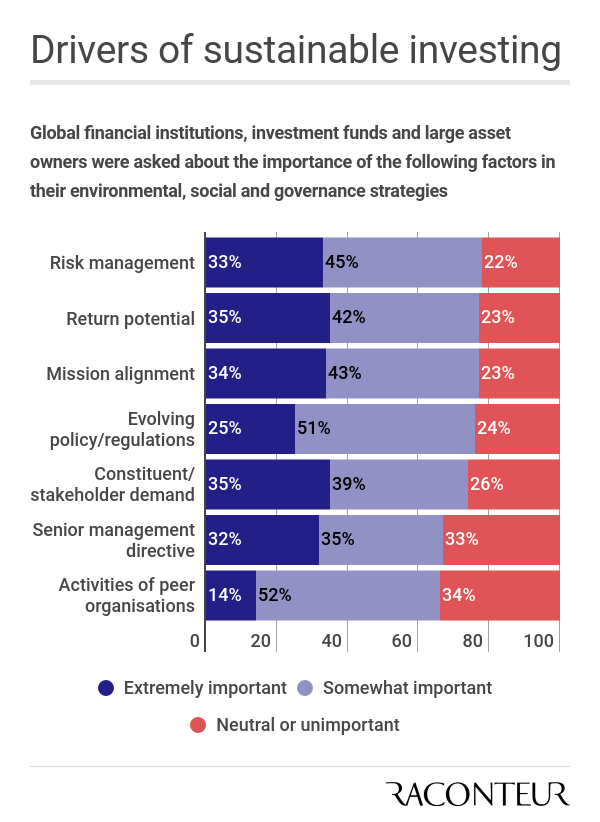 A good example is London establishing itself as a world leader in green finance. The 78 green bonds now listed on the London Stock Exchange have raised more than $24 billion of a global market totalling $155 billion.

The need for sustainable investment led UK economic secretary John Glen to declare at the second Green Finance Summit in London this July: “My vision for the next 12 months and beyond is an explosion of the momentum to the point where ‘green finance’ becomes simply ‘finance’.”

And the momentum is there. Some 86 per cent of millennials are interested in such investment, according to a Morgan Stanley survey.

In addition, June 2018 regulations from the UK government mean pension trustees will be required to produce a policy which includes an assessment of the sustainability of their investment decisions. Norway’s sovereign wealth fund, and Dutch and Danish pension funds are increasingly aligning their investment policies with those of the UN’s SDGs.

How international financial centres can support the UN’s SDGs

Guernsey-based Innovest Advisory works at the nexus between innovative finance and societal impact, and specialises in advising on how capital can address the world’s most pressing challenges, such as climate change, food security and financial inclusion.

Managing director Justin Sykes says: “Impact investing challenges the view that social and environmental issues should be addressed only by philanthropic donations, and that market investments should focus exclusively on achieving financial returns.”

An example he quotes is Greenlight Planet, formed in 2008 to design, manufacture and sell affordable solar home systems to help alleviate energy poverty for some of the estimated two billion people with scarce access to basic and reliable electricity in developing markets.

To date, the business has helped more than six million off-grid households across 65 countries, leading to additional productivity for small businesses and study hours for students.

Mr Sykes is emphatic about the role of international financial centres in mainstreaming impact and green investment: “They have an essential role to play in turning the existing billions of dollars of investment into the trillions that are needed,” he says.

IFCs can facilitate these structures in a transparent, efficient and ac-countable manner

The gap between what’s currently being invested and what’s required can only be bridged through private capital, and that requires specific investment vehicles, he adds.

“IFCs can facilitate these structures in a transparent, efficient and accountable manner, and they are all well placed globally to do so.”

Guernsey on the path to becoming global contender in green finance

The financial ecosystem of skills available in centres means there is access to high-quality legal, accounting, valuation, registrar, company secretarial and audit services for the structuring, launch and administration of funds.

The crown dependency of Guernsey, for example, has just launched the world’s first regulated green fund and was identified by the think tank Z/Yen as an “emerging global contender” in green finance.

That launch “…puts us at the forefront of green finance development and particularly the emerging area of green funds. Guernsey’s reputation in the sector and the breadth of our funds offering positions us perfectly,” says Andy Sloan, director of strategy for Guernsey Finance.

Under the rules, 75 per cent of the value of a fund’s assets must meet internationally recognised green criteria developed by a joint finance group of multilateral development banks. Permitted investment areas include renewable energy, efficient energy generation, energy efficiency, agriculture, waste and waste water, and transport.

Guernsey’s green fund initiative aligns with international trends and common principles for climate mitigation finance tracking, agreed by world’s largest development finance institutions and which overlap with SDGs. It also resolves verification and certification problems, which were considered by many as a major barrier to the growth of the green finance market.

“There’s been a very good response to the product, which was launched in response to industry demand,” says Dr Sloan. “We have a pipeline of potential new funds looking to obtain Guernsey Green Fund status and I’m confident we’ll have several formed by the end of the year.”